YMCA to promote self with famous disco song it once reviled

A bit late to the party, but good for them!

This is a good development for sure. There’s likely some underlying queerness in the song, like… "come to the YMCA and have fun

", I don’t know. But for me it’s a fun song and i don’t read into it much. Seeing them embrace it and having a conversation of accepting people outside of typical “christian values” is great.

Any queerness in YMCA is just imagined. Just like In the Navy. Or Macho Man. No subtext there at there at all!

Their later stuff definitely got much more overt, though (Fire Island, San Francisco, and so on). Still not quite overt enough to clue the squares.

“We have to let go – it wasn’t about what we thought.”

Whatever you have to tell yourself to get through the night, honey!

Imagined or not the song doesn’t strike me as being salacious, might be trying to be a little bit cheeky but it seems to be in good fun. Ultimately this branch of the YMCA is seeking to accept LGBT youths instead of demonizing them for who they are. That’s awesome

As a “Gen X” person myself, I just want to point out that we do not exist.

I’m from the 80’s and at this point i have no clue what the hell my generation is called. Used to be Gen Y, now i’m a millenial? Whatever

I’m with you on that (I was born in the late 70s and I have NF idea what arbitrary generation designator I’m supposedly a member of). I guess you can say that we’re… Generation Fluid.

I noticed in the music video the shots of RamRod, next to Sneakers.

Just a few years after the taping of this video, that block was the site of an anti-gay massacre similar to Pulse in Orlando when a former transit cop took an Uzi, killed 2, and wounded another 6. It was part of a wave of homophobic violence that erupted after Reagan’s election…similar to the anti-everything violence that happened immediately following last November’s great fuckup. 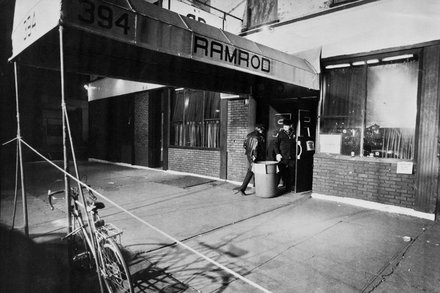 A former transit police officer rampaged through Greenwich Village in 1980, killing two men and wounding six in a spasm of violence that fewer and fewer people now recall.

“We have to let go – it wasn’t about what we thought.”

Whatever you have to tell yourself to get through the night, honey!

When I read this it doesn’t sound like they are saying the song isn’t about gay sex at the YMCA (it is). They are saying that the decision to embrace both the YMCA song, LGBTQ people, especially youths, and marriage equality, wasn’t based on what they thought, it was what was about what was best for those youths. They had to let their own prejudice go.

A pretty worthy sentiment IMO, even if it is late.

I just want to make sure that I understand.

It’s hard to keep up with who we’re allowed to stereotype these days.

Does anybody actually “stay” at the YMCA?

I just try to lift some weights, feel shame, and leave.

Yes, some Y’s have hostels.

Bawww… when I think of YMCA music I think of Cabaret Voltaire or Throbbing Gristle. Although I guess they are not so much about YMCA as that Village People song. Still, those would also have made quite a statement.

They have everything for young men to enjoy,
You can hang out with all the boys…

No man does it all by himself.
I said, young man, put your pride on the shelf,

Does this mean the navy is going to start using “In the Navy” as a recruiting thing?

I would hope so

Does this mean the navy is going to start using “In the Navy” as a recruiting thing?

That’s why they wrote it in the first place!
The Navy contacted group manager Henri Belolo to use the song in a recruiting advertising campaign for television and radio. Belolo gave the rights for free on the condition that the Navy help them shoot the music video. Less than a month later, Village People arrived at Naval Base San Diego where the Navy provided them with access to film on the deck of the berthed frigate USS Reasoner.