Your lifetime pass to Coachella is stuck in NFT hell

Originally published at: Your lifetime pass to Coachella is stuck in NFT hell | Boing Boing

Remember like two months ago when crypto-bros were trying to make a case that an NFT of a piece of original artwork was better than the real thing? 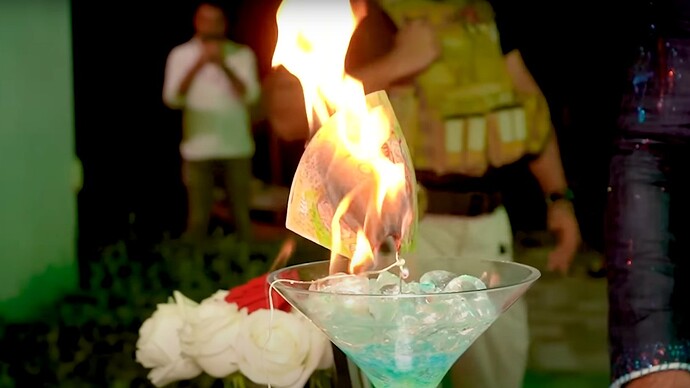 A Frida Kahlo Drawing Was Destroyed to Make NFTs

Art lovers were aghast. Mexican authorities suggested the entrepreneur who did it may have broken the law. Experts warned it could just be a hoax.

A lifetime pass to Coachella could go wrong so many ways, the poorly-chosen currency failing is just the most immediate.

Something, something, rich fools and their money… 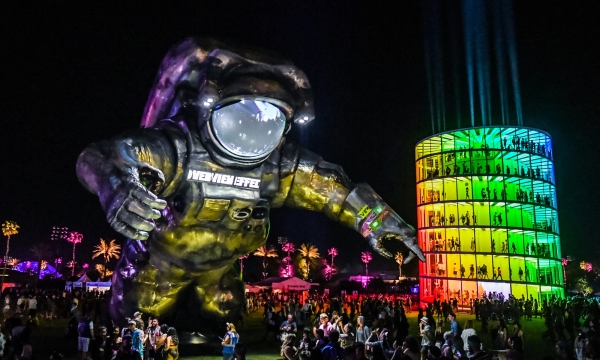 At least two of the lifetime pass packages for the Coachella Valley Music and Arts Festival sold for more than $250,000. Collectively, the 10 packages sold for nearly $1.5 million.

Unique perks: Front of house views for one act at the Coachella Stage for two people; transportation to and from the festival; a meal in the Rose Garden for you and one other guest cooked by a professional chef on the day of your choosing during your festival weekend; $500 in food and beverage vouchers.

Coachella Key 2: Key to the Safari

Unique perks: Lifetime Safari camping accommodations for one festival weekend each year that come with a furnished and air-conditioned tent, concierge service and more.

Unique perks: This is the most bare-bones package of the guest pass-level NFTs. It includes two lifetime guest passes and the other perks offered to all, such as two free merch items.

Unique perks: This is the only package that doesn’t include the high-end guest passes, but rather lifetime VIP passes, which do not allow access into the special viewing areas. However, the perks page notes that two guest passes can be purchased.

Unique perks: A private two-hour party with an open bar and up to 50 guests featuring a surprise host in a secret festival location for the 2022 festival. However, all party guests must have festival passes.

Coachella Key 6: Key to the Sahara

Unique perks: A chance for two people to go on stage in the Sahara tent during one performance at the 2022 festival.

Unique perks: Front of House access for two people for one act at the main Coachella Stage at the 2022 festival.

Unique perks: A one hour tour of the entire festival site with a Coachella producer for two people at the 2022 festival.

Coachella Key 9: Key to the Dinner in the Garden

Unique perks: A meal in the Rose Garden cooked by a professional chef for four people and two additional VIP festival passes at the 2022 festival.

Unique perks: Eight additional guest festival passes and a fully-stocked trailer in the VIP compound for 10 people during weekend 2 of the 2022 festival.

I guess the lifetime wasn’t for the buyer, but FTX?

Not that FTX was long-lived, either. But yes, this is how pyramid schemes usually end.

Along with disappearing acts:

Rumors are swirling online that (Caroline) Ellison (Alameda Research CEO) is planning to flee Hong Kong for Dubai, which does not have an extradition treaty with the U.S., but her whereabouts are currently unknown. Her last public statement was a pair of tweets on November 6, defending criticism of the company’s balance sheet. via Forbes

Studiously Schlubby Sam is still barricaded in the Bahamas, frantically trying to raise enough money from suckers to put off the inevitable visit from large muscular gentlemen bearing firearms (their being from the FBI is the best version of that scenario). 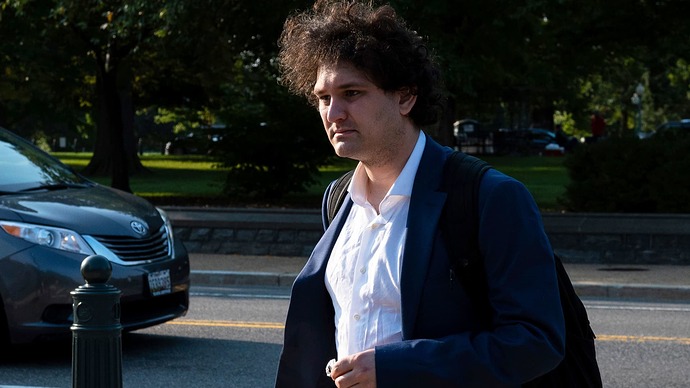 Sam Bankman-Fried tries to broker FTX bailout from his home in the Bahamas,...

Sam Bankman-Fried is hunkered down in an upscale neighborhood of Nassau, still scrambling to raise billions to plug a hole in now-bankrupt FTX.

Let me point out here that even Ticket Master does a better job.

Of ripping people off?

Studiously Schlubby Sam is still barricaded in the Bahamas, frantically trying to raise enough money from suckers to put off the inevitable visit from large muscular gentlemen bearing firearms (their being from the FBI is the best version of that scenario).

I just learned that both his parents are Stanford law professors so if the FBI does take him in he’ll probably get decent representation at his trial. But man, given his privileged upbringing I don’t know how well he’d survive in a real prison. 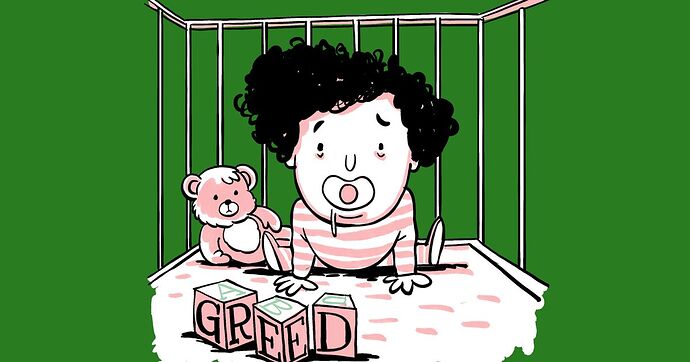 I just learned that both his parents are Stanford law professors so if the FBI does take him in he’ll probably get decent representation at his trial. But man, given his privileged upbringing I don’t know how well he’d survive in a real prison.

Ellison’s parents are MIT economics professors – no last-ditch legal representation card to play there. Becoming a fugitive from the law might be a better move for her than trying to brazen it out like her confederate Sammy (also, I doubt she put in anywhere near the $40-million in donations bribes to politicians that he did). 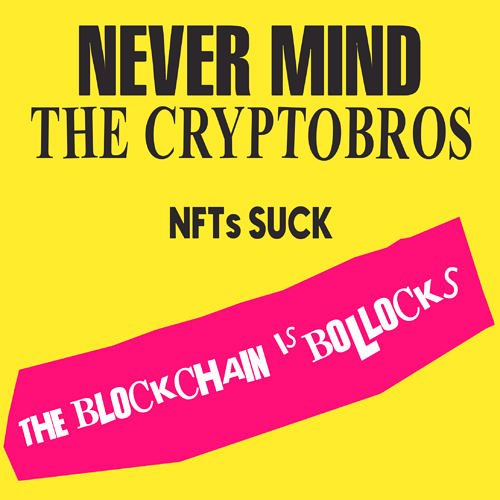 I don’t see the Brooklyn Bridge on those lists.

As @gracchus points out, the FBI is the best answer he can expect. I’d bet that it won’t be the final outcome. Some guys with bone saws and other interesting tools are pretty likely already watching him.

I don’t really care, but what is this redemption process? Did coachella not get cash up front way back at step 1?

I’ve been reading this book. 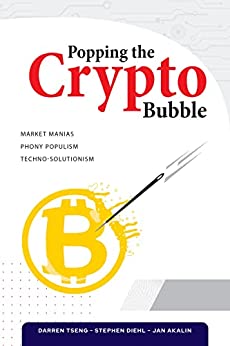 Popping the Crypto Bubble - Kindle edition by Diehl, Stephen, Akalin, Jan , Tseng, Darren . Download it once and read it on your Kindle device, PC, phones or tablets. Use features like bookmarks, note taking and highlighting while reading Popping the...

It’s good for pointing out obvious truths that bitcoin bros would rather we forgot.

Oh no, the feds shut down e-Gold because it was being used for ransomware! We desperately need decentralization!

Ok. So argument aside on whether or not crypto is tHe FuTuRE oF cURreNcY (it’s prolly clear where I stand) are the Coachella NFT passes still accessible or not?

Review by Cory Doctorow of 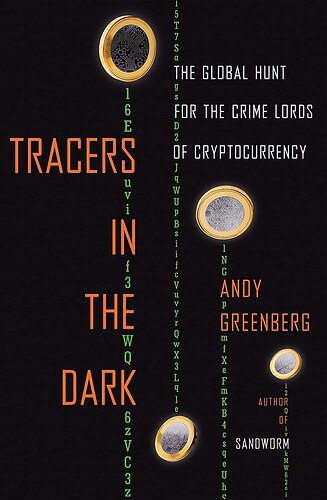 In Tracers in the Dark , Andy Greenberg traces the fascinating, horrifying, and complicated story of the battle over Bitcoin secrecy, as law enforcement agencies, tax authorities and private-sector sleuths seek to trace and attribute the cryptocurrency used in a variety of crimes, some relatively benign (selling weed online), some absolutely ghastly (selling videos of child sex abuse).

Bitcoin’s early boosters touted its privacy protections as a game-changer, a way for people to exchange money with one another without anyone else being able to know about it. But the reality is a lot more complex. In a very important way, Bitcoin is the opposite of private: every transaction is indelibly inscribed upon the blockchain, linked to a pseudonymous identifier.

In theory, if you are careful about not linking a wallet address to your real identity, then your transactions are not traceable to you.

There are so many ways to slip up and expose your identity, and even if you maintain perfect operational security, other people might slip up and do it for you. This is a lesson that many cryptocurrency users learned the hard way, as Greenberg documents.

The de-anonymizers who sought to expose Bitcoin transactions had a major advantage: users of Bitcoin believed the hype and really thought that the blockchain provided them with a powerful – even invulnerable – degree of anonymity. They used cryptos to buy and sell a lot of illegal things, from fentanyl to murder for hire, over long timescales. That meant that they attracted the attention of law-enforcement agencies, who were able to use the eternal, indelible blockchain to backtrack their subjects’ every transaction to the very first days of cryptocurrency.

The attacker’s advantage, combined with the blockchain’s eternal and indelible memory, constitute a powerful argument against the possibility of using blockchains to attain financial privacy. We all slip up. The reason the feds catch their prey isn’t that they’re smarter – it’s that they don’t have to be. The feds don’t permanently inscribe their every error on an indelible public ledger. The defenders have chosen a defense that involves this tactic. They have, in other words, chosen a system of privacy for the infallible – a category that effectively doesn’t exist.

This makes for a pretty devastating critique of public ledgers as a tool of privacy. And also, you know, a cracking technothriller.