I’m working on my Mezcal palate. It’s still not my favorite drinking straight, compared to whiskey (usually bourbon or rye for me) but I’ll get there, I imagine.
At the moment, I do enjoy making a cocktail out of it. Basically the same thing I do with 100% agave tequila (which I also do not generally enjoy straight) in so far as I use a mixing vessel with ice, the booze and then add some lime juice, orange juice, dash of Cointreau, shake and pour into a rocks glass over ice.
I also like putting just a little bit of jalapeno in the bottom of the mixer.
Mezcal makes a really nice simple cocktail, and I do like the flavor difference between that and “silver” tequila.
Side note, I swear this is true, but if you like making tequila cocktails, the Kirkland silver is really good.
The last mezcal we bought was the below. I made drinks with it over the weekend like above:

Sounds inadvisable, will consider marinating steak with it and pineapple if I eat that again sometime, certainly better than methylpentacene ammonium lead bromide triiodide (or being bursar for a D.C. Comics production, then trying to make it pay off in lurican film actors.)

So, it smells like rocks? Sounds, um, just great.

Also common and desired by a lot of people (myself included) in a lot of wines.
For instance “minerally” is a common theme in many a Sancerre or new world Sauv Blancs made in the same style.

“Sancerre is often compared to neighboring Pouilly-Fumé which also specializes in 100% Sauvignon blanc wines, and while there are some differences, wine experts like Robinson, Johnson and Karen MacNeil note that only very experienced tasters can distinguish the differences in a blind tasting.[6][13] Broadly speaking, Sancerre tends to have a fuller body with more pronounced aromas, while Pouilly-Fumé wines are more perfumed. However, both wines have naturally high acidity and the potential to exhibit the minerally, flinty notes described as pierre à fusil or gunflint, as well as citrus and spicy notes.” 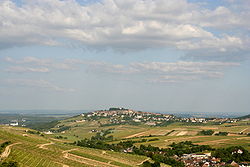 Sancerre is a French wine Appellation d'origine contrôlée (AOC) for wine produced in the area of Sancerre in the eastern part of the Loire valley, southeast of Orléans. Almost all of the appellation lies on the left bank of the Loire, opposite Pouilly-Fumé. It is well regarded for and primarily associated with Sauvignon blanc. Some Pinot noir is also grown, accounting for around 20% of the region's production, making mostly light red wines under the designation of Sancerre Rouge. A rosé st White...