114 candidates in Mexico's upcoming elections have been murdered, so far

There are systems (e.g. Israel) where you vote for the Party, and killing one member (even if currently the one in line for the job) just gets the next in line.

Might could be it’s time Mexico adopted that for now.

Might could be it’s time Mexico adopted that for now.

Tell that to Yitzhak Rabin. 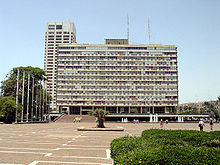 The assassination of Yitzhak Rabin took place on 4 November 1995 (12th of Marcheshvan, 5756 on the Hebrew calendar) at 21:30, at the end of a rally in support of the Oslo Accords at the Kings of Israel Square in Tel Aviv. The assassin, an Israeli ultranationalist named Yigal Amir, radically opposed Rabin's peace initiative and particularly the signing of the Oslo Accords. The assassination of Israeli Prime Minister and Defence Minister Yitzhak Rabin was the culmination of an anti-violence rall...

Trump, note to self: could learn something from Mexico.

(Obviously a joke, because a) Trump can’t take notes, and b) can’t learn anything.)

I don’t know if replacing elected representatives with a roster of party hacks would be a win.

It would seem that maintaining good relations with Mexico and helping them bring down the cartels would be in the best interest of both of our countries. But hey, lets just throw up an expensive piece of concrete between us and hope the problems all go away.

If shows like Breaking Bad and Narcos taught me anything, it’s that borders don’t do much to stop drug traffickers or gang members.

Primarily, the murdered candidates were standing for local office, running on anti-corruption tickets.

I was reading that gangs were sending drugs over the existing border wall using a catapult - that they had built onto the wall itself. A taller wall literally means a longer-range drug-delivery system.

I keep hearing that tourists rarely get in the middle of this violence. Seems like that most interesting man would be a good candidate.

Legalize drug production? Would that even stop the violence?

Depends on whether the state still wants to crack down on corruption after all the crime lords shift their assets over to real estate.

Who would YOU rather fight? Well armed, hardened Narcos or kids throwing rocks at the border or peaceful migrants.