70 top-paid US health industry CEOs raked in $9.8B since Obamacare passed

the only good thing to come from repeal of the ACA (besides the thinning of the TGOP supporters) will be that the healthcare industry will probably collapse. Maybe then we can get single payer out of the ashes.

I thought I heard a loud sucking sound.

Maybe then we can get single payer out of the ashes.

I wonder how many people will die in the interim.

you assume the 1% and their paid servants in D.C. even care about the other 99%.

The Senate is voting to kick people off of insurance just so the rich can get more money. I’m ready for a revolution.

I’m ready for a revolution.

Won’t happen in earnest until there are widespread food shortages… and by that point, I fear it will be too late.

Was I the only one who saw “Gilead” on those pills and thought it was a new Handmaid’s Tale promo?

Won’t happen in earnest until there are widespread food shortages… and by that point, I fear it will be too late.

It’s already too late. How do you plan to fight the drone that will fire a missile at you from miles away?

I’m ready for a revolution.

I’m pretty sure you are not. People who keep saying things like this tend to badly underestimate how much they have to lose, and overestimate the chances of the revolution fixing things.

Yes, a lot of things suck in the United States right now, but the historical record of revolutions should make anyone very, very cautious about wishing for one.

Pharmaceutical companies have an unofficial license to print money. Chrome-dome Rick Scott ran Columbia/HCA, which ripped off the government for hundreds of millions. By that time, Scott had resigned and was never charged on a personal level. It gave him good training to become governor of Florida.

so just giving in and letting the TGOP and 45 destroy the country so the 1% can get richer is okay?

The ACA was specifically written to give the Health Care and Pharmaceutical companies more customers who paid regularly and reliably (with our tax dollars).

The intent of the bill was to enrich CEOs. It also insured a good amount of Americans as well, but that was never the goal of the lobbyists who wrote it.

Is this not a questionable metric for stating that “America’s health care industry is booming”? What if executive compensation is rising faster than profits? What if they are, for instance, attempting to plunder as much as they can before everything goes fubar?

(It is of course thoroughly absurd for any individual to be receiving that kind of compensation.)

Cheeto is working on creating those as well

President Trump's plans to gut the Agriculture Department's discretionary funding is getting criticized by key lawmakers. 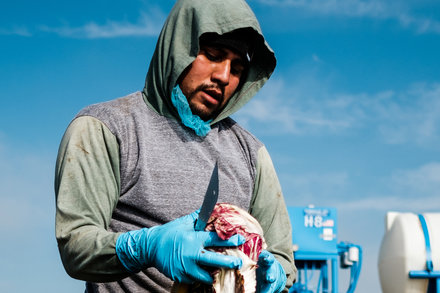 People in a Republican stronghold in the Central Valley thought a promise to crack down on illegal immigrants was just talk. Now they’re alarmed that it isn’t.

Well, I guess I should just lay down and die right now then, huh?

I don’t have any idea what the hell we should do.

Yeah, I know the feeling.

Kudos to you for being able to admit it.

so just giving in and letting the TGOP and 45 destroy the country so the 1% can get richer is okay?

No, you very obviously didn’t get met, or what I said.

Just because I believe that revolutions are extremely dangerous, and yearning for one at the moment in the US is a sign of not understanding just how dangerous they are, and how bad things might get, does not mean that I approve of Trump, or the rapacious, stupidly short-sighted American capitalism, or your screwed-up healthcare situation (which, let’s not forget, was considerably improved by Obamacare).

You’re perpetuating a false dichotomy: revolution or submission. I want to point out that there are plenty of options besides either, and you really, really should pursue those first, instead of some quixotic dream of a better America springing up from the ashes if you burn the current system down.

I wonder how many people will die in the interim.

Yeah, the “let it all burn down so we can build something better” tactic really only works if you’re healthy enough to survive the transition period.

It’s also kind of reminiscent of the “if Trump wins the nomination he will bring down the Republican party and force them to reinvent themselves as something better” theory that was making the rounds in 2016. Sometimes taking a step backwards isn’t a catalyst for making things better, it’s just a step backwards.

no sympathy. People were warned and voted for him anyhow.