They’re trying to prove that FDNY BLEW UP a building on purpose? What? While hundreds of their fellows just perished and radio communications were compromised and the nation was in complete chaos? Oh boy.

Asbestos abatement was going to cost something between $80 million to $300 million for both towers— as you can imagine, this was a huge liability. The asbestos also prevented them from simply demolishing them

Asbestos was only ever going to be used on the first 40 floors of the buildings. There would be no asbestos from floors 41 onward. But anticipating a ban on the use of asbestos, it was only used on the north tower, the first one to go up. And more than half of that was later removed - it’s not the big deal that you think. The south tower did not use asbestos.

[quote=“Syntropic, post:340, topic:65479”]The very peculiar and incriminating aspect however is that Larry Silverstein, as part of the transaction, demands an extraordinarily high $3.5 billion insurance policy for the towers in case of destruction.
[/quote]

The insurance scam fantasy has been long-debunked. The insurance money fell well short of covering the costs. In fact the insurance value was way below what it should have been. Most of the legal wrangling after the fact was also due to the insurance contracts being incomplete. With too low an insurance value and less-than-solid contracts, literally none of the insurance-based activities point to the actions of people who knew what was going to happen in advance.

With the WTC, Silverstein wanted coverage in the amount of $3.5 billion for the virtually unheard of “loss caused due to ‘acts of terrorism’”.

There had already been one terrorist attempt to destroy the buildings. There was later evidence that it was still a target. (This of course was confirmed on 9/11.) Seriously, you’re really making this argument?

I did watch the video. To summarise, people experienced a lot of trauma during 9/11. Their worldview, including belief in their safety within the US, was damaged. Many people came for psychological help at that time, because the attack was deeply traumatic to many normal people. To believe the truthers’ account would challenge deep seated beliefs about the goodness of the government and American people. The standard account represents wishful thinking, and people go into cognitive dissonance and pathologise the messenger rather than believe the truth. On top of this, American exceptionalism and a lack of humility cause people to deny that this kind of conspiracy could happen in the US.

Is this not just an attempt to pathologise people who don’t believe the truther version? Most (all?) people here are far from accepting of the Bush administration’s attempt to justify war based on this, along with a number of other parts of the official account. They don’t believe in US exceptionalism and aren’t particularly complementary about America’s international policy. They don’t believe in the inherent goodness of the American people. Many aren’t even American.

While it was a momentous and tragic event, for most people it wasn’t as traumatic as this video suggests, nor did it change their lives to the extent that it seems to have done with truthers. Having rejected jingoism, there’s no comforting and unifying belief to cling to, as is the case with a conspiracy theory.

As an ex-religious person, truther arguments do remind me of my own thought patterns when I came up against flaws in my beliefs. The account is true whatever the evidence, you just have to find the reasons why it’s true.

You simply spread the story that he was crazy – he was extremely ill, correct? He wasn’t in his right mind.

Leave the Republican candidates out of this.

This fact leads right into more mystery which lends itself to 9/11 being planned. Asbestos abatement was going to cost something between $80 million to $300 million for both towers— as you can imagine, this was a huge liability. The asbestos also prevented them from simply demolishing them.

$300 million dollars? For office space in Manhattan? The increase in rents would have made that pay for itself soon enough.

The very peculiar and incriminating aspect however is that Larry Silverstein, as part of the transaction, demands an extraordinarily high $3.5 billion insurance policy for the towers in case of destruction.

And gets criticized for not demanding a far bigger insurance policy to cover not just the building itself but the value of tenant property.

Because buildings have no feelings.

but it’s in the picture you just posted.

You must know that is not a phrase used in the demolition industry. The only “pulling” that is referred to is using heavy equipment and wires to put a strain on a structure to influence the direction of collapse. The connection with the phrase used to demolition was likely made by someone who wanted to fool people who would not actually research the terminology. And it worked!

Well, that was an entertaining read! Thanks to all the reasoned debunkers that contributed to the discussion.

What, someone wanted insurance on a building that covered acts of terrorism on a building where terrorists had actually set of a bomb previously? Spoooooky.
(ETA: I see others have beaten me to the punch, and with links and reasoned arguments to boot. Ah well).

No, no, no. The temperatures did not reach the melting point of steel. All sides acknowledge this.

Perhaps they didn’t get the memo. I find plenty of people claiming melted steel and temps in excess of 2500°F.

Back by popular demand, newly revised and updated – 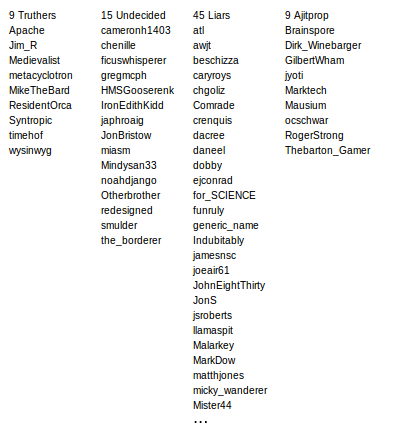 Thank you for participating. Coffee and donuts in the lobby.

What do I need to do to make your list? I really think it could be a touchstone for updating my resume.

This I learned: Facts have an “ajitprop” bias.

Oh. That is not going to carry nearly the weight I hoped it would.

Liars == nonparticipants? Jeez, where is my Nuke button for this thread?

where is my Nuke button for this thread?

Maybe @falcor could carry out a controlled demolition?