A history of Easy-Bake Ovens

Will you just look at that little rainbow flag on the vent hood? Proof that Easy Bake was tryin’ to ‘gay up’ them young boys.

/SRSLY, was always and still pissed that I never got one of these as a kid in the 70’s. Who the shit don’t want cake? But Noooooo, I had to get heteronormative genderboxing crap like kid versions of tools! Not even real tools which I could have used to sever the brake lines of my dad’s car for giving me that crap!

Also: The color makes me sad that unless you’re firmly middle-class anything other than a white fridge is kind out unobtainable. I was always so jealous of Rhett Butler’s fridge from her show “Grace Under Fire” because it wasn’t just a white box. Her fridge had character!

It makes real cupcakes. WIth a forty-watt bulb. But the secret ingredient is love…dammit!

I don’t think either of my sisters had an Easy Bake when they were kids. I was interested in them on a technological basis, but didn’t want one myself. My curiosity was sated by visiting friends and cousins and seeing their ovens in action.

My sister got my nieces an Easy Bake when they were little, and they used it a lot. I bought them mixes as gifts, and also a recipe book specifically for the Easy Bake. It came with a set of measuring spoons for tiny, tiny measurements, like 1/8th and 1/32nd teaspoons. The oven is gone, but my sister still uses those spoons!

When I was little I wanted the Fisher Price Kitchen, but my dad wouldn’t let me. Instead I got a tool set, and when I pretended it was a kitchen anyway I got the barbecue.

The funny part is that )as my mom pointed out) my dad, my uncle, and my grandpa sold wholesale food, my dad used to own a pizzeria, and I saw all of them cooking in the kitchen all the time. But somehow the gender psychology of toys still overruled all that.

For some reason these things just don’t work as well with LED and CFL bulbs.

Power to the Cupcake! 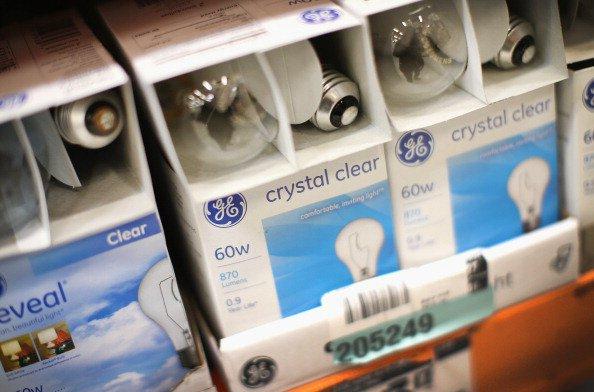 Congress flips the switch on the fight over incandescent light bulbs

Congress flips the switch on the fight over incandescent light bulbs

Didn’t Kenner re-engineer the Easy Bake with a real heating element a few years ago? I remember some handwringing about kids burning themselves with it, but I don’t know what came of that.

My sister had an easy bake growing up, and while it worked it was soooo slow that by the time the cake was done you were well and truly bored with it. The stupid thing didn’t even come with a timer so you had to constantly monitor your “cupcake” lest it turn hard and inedible.

One final side note: If you get a chance, go and see Alton Brown’s live show. One of the segments is a grown up take on an Easy Bake oven.

Alton Brown’s “Edible Inenvitable” live tour includes a song to the Easy Bake oven, a punk rock number called, of course “Easy Bake.” He brings out his vintage 1964 model… then the MEGA BAKE, a 54,000-watt unit powered by 54 rock-n-roll lights, with a ship’s wheel to move a tray of food under the lamps. Live pizza on stage in 3.5 minutes.

Scroll down int he article to check out the toy I designed: The Queasy Bake. It was re-imagined for boys (and girls!) who wanted to make something scary and delicious. Came with ooky kooky recipes and fun food formulations that bubbled and sizzled— and turned your tongue colors!

For those who long for a light-bulb powered creative experience today, check out the “Easy Make Oven” in Make magazine vol 35. Cast your own creepy crawlers!

If they want to get more boys interested, just paint it black, add a bad-ass flame job, and slap Guy Fieri’s face on the box. Then include a lot of bacon recipes.

scan down to the end of the article - it’s in there about the heating element.

That is totally badass that you designed that! Way to go!!

I found this quote in the article kind of hilarious and I thought the Queasy Bake was a good approach to them re-entering the boy market - fun and boy-appealing.

That said, if you search “Easy-Bake Oven” on Google today, the title of the top result, Hasbro’s page, is “Easy Bake | Cooking & Baking Games for Girls,” and the commercial shows girls with flowers in their hair and pink polka-dotted aprons dancing around a purple Easy-Bake Ultimate Oven, and decorating pink-frosted cupcakes with sprinkles.

Cast your own creepy crawlers!

It was Creepy Crawlers Thing Maker that got HOT. I like the comment in this video about burning their fingers!

And is that Burgess Meredith camping it up in this commercial?

It makes real cupcakes. WIth a forty-watt bulb. But the secret ingredient is love…dammit!

In the 70s you could get, for about the same price as a white, fridges in terrifying mod colors like burnt orange and avocado green. You can see that fad reflected in the colors of the EZ bakes of the time.

When I was appliance shopping last year I saw a black fridge as a not-prohibitive option.

But the stainless steel look is definitely something you pay for.

They make heat-only bulbs that aren’t restricted, but unfortunately they are expensive.

My Dad wouldn’t left me have a EZ Bake as a kid because it would make me gay.
So, I got the GI Joes instead. Today, I’m married to former Marine.

How perplexing. I was sure I saw this same story here last year, but it doesn’t turn up in the search.

My fridge is done up in black & yellow hazard stripes, with red door handles.