A Manchester woman breaks out in "Don't Look Back in Anger," crowd joins in

In some quarters of American politics, that singer would be considered a “serious troublemaker”.

For all the pathetic people who want to break society, give it up …collectively we’re tougher and braver than you can ever be. The tide of life will wash over you, We will honor your victims by living our lives even larger, your legacy will be no more that an unpleasant whiff in a field of flowers.

Dang it BB! I’m crying my eyes out over here.

the sunday after the september 11 attack in new york, i was in prospect park in brooklyn. on a small hill a woman started singing “we shall overcome”, people began walking up the hill and singing with her till the hill was crowded. it was one of the most moving experiences of my life, like a dream. it stays with me as an enduring image of the greatness of america.
no one talks about how new york was turned into a giant peace park after the attacks. they might have been calling for revenge and retribution in texas, miles away from the attacks, but not in new york.

Yep, tears. That cuts right through… whatever it is that normally keeps the world at bay.

We can fight back, but we don’t need guns. 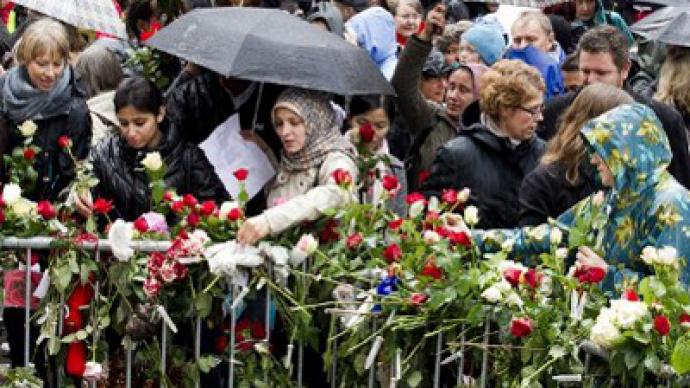 Forty thousand Norwegians flooded the streets of Oslo in the pouring rain to defy mass murderer Anders Breivik after he derided the popular children's song “Children of the Rainbow” as a Marxist tool to brainwash children.