From Bosch’s Christ carrying the cross… 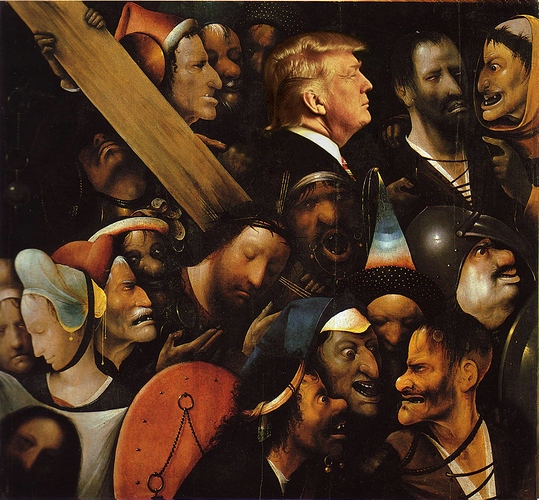 He has no honor and formalizing his twitter vomit will not add any.

He has no honor and formalizing his twitter vomit will not add any.

“You call me Sir and I call you Sir. The difference is, you mean it.”
(Apocryphal Sandhurst sergeant). 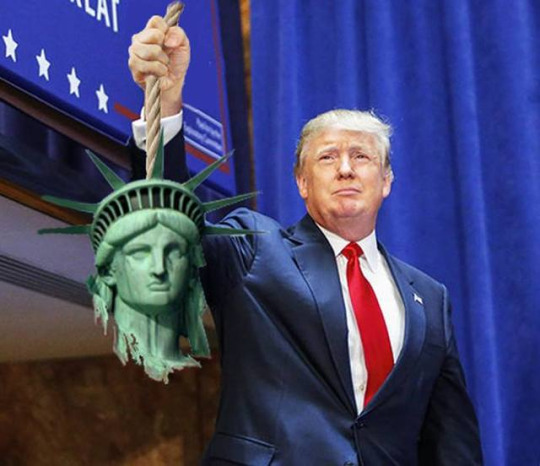 But if we can't keep Trump "not normal," then at least we can periodically denormalize him periodically with clever, jarring reminders of just how terrible Trump is when juxtaposed against the symbols of normalcy.

This is interesting commentary. But the goal is not to complain about deviation from the norm, right? We want to deviate, for things to get weird. Because everyone agrees that normal is a nightmare even as we acclimate to it. Global economic and ecological systems are fucked, hatred and intolerance stubbornly pervades our societies, and nobody's doing anything about it. That's normal. It is any surprise that people celebrate any and all deviation from that? Isn't that exactly why people voted Trump in the first place?

I think complaining that Trump doesn’t act like a normal president is missing the point, and worse, implies that if he would just act more presidential, then our government would be more acceptable. It smacks of nostalgia for an era which never existed - when our government was reasonable and just, noble and compassionate. That myth was been debunked on many levels over the past decade, so appealing to this sense of normalcy doesn’t sell many tickets anymore.

Normal has failed and that’s why Trump succeeded. If we want to be a part of the future, we have to get even weirder than Trump.

Twitter is turning us all into worse versions of ourselves

Well, not entirely, but in the fight over the travel ban, Trump’s chronic inability to stay on message has been an enormous asset to the people fighting the ban. Twitter has been the primary conduit by which Trump has bypassed the message managers who are supposed to make his horrifying agenda presentable
I mean, he could also screw himself over in a television interview with Lester Holt, but twitter is still his primary way of defeating his own agenda

Clearly, part of him wishes he could turn in his Commander-in-Chief badge and go back to being Heckler-in-Chief.

i DO think it’s interesting that 45 prefers Twitter. as a user as well, i feel it’s perfect for our times (not that i like or support a single thing he’s doing with his account). i bet it drives the board at Facebook crazy that he doesn’t seem to even know they exist.

I say don’t do this. Because then those symbols of normalcy, having become more attached to Trump, turn into crap - just like the words president, fact, news, safe, great, etc.