He should build the Estes model and launch it.

Nice build, and done without NVA company and government inspection, no less.

Note: NVA is the industry term for ‘Non-Value Added’.

Painting aside, the model rocket is probably easier to build than the Lego model.

I bought one of those years ago. Just got around to filling in the body tubes’ spiral seams with sandable brush-on primer.

That mention of it being out of stock made me wonder: are Lego ‘Ideas’ kits limited edition things, or do they join the general catalogue of kits available permanently?

I wouldn’t buy it from that Amazon link. The scalpers have increased their prices but if you can wait, the folks at Lego say there will be more sets available in their stores once their production run is finished.

I don’t think the ullage motors are quite right, but overall it’s a really nice looking model.

There actually is no permanent catalog, all Lego is limited edition. Ideas kits are in their catalog, though (I just got mine in the mail the other day). Some sets stay around longer than others. Depends on popularity (I’m sure these will be back in stock multiple times before they stop making them).

Just got around to filling in the body tubes’ spiral seams with sandable brush-on primer.

If yours is the 1:144 Airfix model, just look at all the nice aftermarket thingies you can use to spruce it up and ‘accurize’ it.

Just look at it! (And there may be other aftermarket producers out there for you lil’ 'pollo sat!!)

Neat! For me, the Proach 1:48 is the holy grail of model rockets. 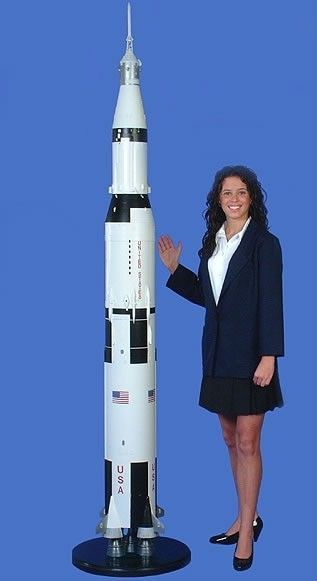 I will share around that site, but in my case I’m building (or procrastinating about building) a fairly simple cardboard-with-plastic-details flying model rocket.

Scale builders, both plastic and flying, go to insane extremes to get the details right!

Scale builders, both plastic and flying, go to insane extremes to get the details right!

Tell me all about it. In one of my earlier posts I mentioned my Northridge Earthquake ‘adventure’. That one pretty much destroyed my long-worked on 1:72 X-15 diorama. It had a tarmac, pulling tractor and everything!

They are made to order… The rocket… not the lady.

btw, that’s not even their biggest Saturn V

Are you planning on flying it when done? A friend of mine built one years ago, and it was one of the cooler model rockets to launch. The substantial size/weight means it actually needs a second to get up to speed, so you have time to enjoy watching the liftoff. Way more fun than the tiny lightweight rockets that zip off into the sky in no time, never to be seen again.

Yes, building it to fly!

Built “stock” the Estes Saturn V flies on a D12-3, which kind of lobs it in slow motion.

One of my children works for NASA and has had this on order since it was announced. Sometime soon, he’ll be taking some of his backlog PTO and binge-building it – whereupon he will take it to work as the (for a while, anyway) ultimate cube toy.

Really. Dunno how they worked it, but there you are.

Remember: fiftieth anniversary coming up. Of the three of us who got together to watch the landing live on TV, one has been dead for 16 years and the other dropped off the map so thoroughly that when I asked his mother she had lost track of him. Still …