It’s irrelevant, though, since he plead guilty to a lesser charge and it’s not clear that he was doing anything beyond being a petty, vindictive loser.

It was attempted murder. The fact that he botched the crime doesn’t alter his guilt of it.

Absolutely not defending this guy, but 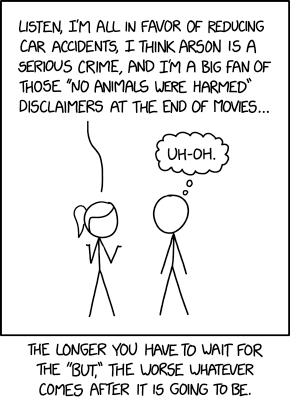 The last couple of judges who meted out these slaps on the wrists for execrable crimes had their asses kicked off the bench.

I know it’s a bad habit. I keep latching onto some little detail of a story and come to the bbs trying to talk about it while ignoring the broader theme of the post. And clearly I do it so much that I’ve started coming in on the defensive — not that it makes the response any better at all.

Thinking more and more that I should just keep my mouth shut in the first place.

I get a bit paranoid about how my Google search history

This is why you shouldn’t search with Google unless absolutely necessary. Duck Duck Go works fine in most cases.

I appreciate your self-awareness here. I don’t really think you intended to come across as you did – Happy Mutants like to geek out over the details, and you got a little stubborn and defensive when you were called on its being inappropriate or off-topic in this particular instance. It happens.

The point people have been making is that these details are about as relevant to the story at hand as an ammosexual’s wanking over the details of the kind of weapon used in a specific mass-shooting, with the same (in your case unintended) result: distraction and derailing from discussion of the main story and its fundamental issues. As the moderator recently said in regard to mass shooting topics:

the type of weapon used or such details are only relevant in the context of narrowly tailoring legislation or similar discussions, and absolutely don’t belong in these topics

This isn’t a story about different types of sleeping pills and the regulations and control of them. This story is about a man who obviously and admittedly attempted to seriously harm a woman who was trying to leave him, and – more importantly – about a judge who was looking for any excuse (including the type of sleeping pill used) to let him off with a slap on the wrist.

The last couple of judges who meted out these slaps on the wrists for execrable crimes had their asses kicked off the bench.

Exactly why these stories are more than the clickbait some imply they are. Awareness leads to action. Judge Antonio Viviano [@pesco: please add his name to the FPP] needs to have his face slapped up on a recall billboard.

Judge Antonio Viviano in Macomb County Circuit Court was inclined to give the man probation until he heard [Therese Kozlowski’s] plea.

The coffee spiking took place during the couple’s divorce in 2018. Therese said she felt tired and sick and had blurred vision after drinking the poisoned coffee.

At one point, the couple’s adult daughter even drank the java.

Judge Viviano claimed that the ex-husband “does have a sense of remorse.” Viviano then handed him the two-month jail term, to be served on weekends.

Well, it’s only a woman! Not like this kind of thing doesn’t happen all the time. No reason to get all worked up over it, honey… /s

Yeah, I’m highly sensitive to antihistamines. There’s only really one I can take without either passing right out or getting heart palpitations. A large dose of Benadryl would put me out. Possibly permanently.

Like, I don’t have big warnings about it in my medical history because it’s really easy to just … avoid taking them. Unless, of course, someone who knew I had adverse reactions to them were to slip them into my coffee.

Not all rage is impotent. Sometimes it’s very fertile and I think that’s why some people are so eager to dismiss it when it comes from people whose rage just might be justified. Rage allows us to confront fears and overcome obstacles. Assuming other people can’t put their rage to good use says more about the one holding the assumption than it does about anyone else really. Most of the time people are actually at their best sometime after they realize openly that they are, in fact, fucking angry. If the only path for that motivation you can imagine is paralysis, destruction, or impotence… that’s on you.

This was attempted murder. His incompetence is not germane to anything. That is an insane amount of diphenhydramine and reactions to those kind of doses are not necessarily predictable. His incompetence means only that he failed to actually murder her.

Speaking of unpredictable reactions: I have a rare-but-known reaction to ephedrine products, in that I become VERY aggressive and belligerent. Anyone who’s gotten to know me over the years knows how out of character that is for me! If that guy had tried to poison me with Sudafed instead of Benadryl, he might well have gotten attacked by an out-of-control woman…the tables would be turned on him!

he might well have gotten attacked by an out-of-control woman…the tables would be turned on him!

But then you’d be in jail for 30 years. You wouldn’t get weekends for 60 weeks

So possibly he was hoping she’d die in a car crash, and not have something prescription in her blood. He likely did not have access to benzos/ludes. Shooting at your wife with “just a .22” doesn’t make anything less alarming. Diphenhydramine usually says, at the normal dose “be careful or driving or operating heavy machinery”. And he gave her 4-8 times the dosage.

Absolutely not defending this guy, but I always get curious when news reporting refers to chemicals in the most alarmist way possible, so I looked around a bit.

Something to Ponder On: You find out that a stranger has been secretly and repeatedly dosing your wife’s (or any loved ones’) coffee with OTC sleeping pills. Putting aside any laws and guidelines you may know of, what, to you, would be proper punishment for said stranger? What could serve as justice?

Please note that I’m not asking for your response. I’m just offering up something to consider.

Its bennedryl. I’ve routinely taken 150mg for days on end for bee stings and poison ivy (both potentially hospitalize me). Hospitals use it (or used to) as the default sleeping pill for patients because of its safety.

I can’t even find an LD50 for humans, but the LDmin is listed as 10.1mg/kg on material data safety sheets (I don’t want to link a pdf). So for the average American male that’s close to 900mg. Now that doesn’t mean large doses aren’t dangerous, nor does it mean this guys wasn’t trying to kill her.

You hear about a lot of attempted murder and attempted suicides with diphenhydramine, cause people see “sleeping pills” and assume they’re dangerous without knowing what’s actually in them.

One pill could have put her in the hospital or killed her if she’d fallen asleep driving, though.

There are also dangerous drug interactions, and doses well less than dangerous can make you freak the everloving fuck out.

It blows my mind that there are people in this thread actually quibbling about dosage and intent, as if what the guy did isn’t utterly morally reprehensible and dangerous as fuck, regardless to either factor.

I don’t think anyone here is excusing this sick, abusive criminal. But the details are part of the story, and dissecting stories can be interesting and informative.

I’ve learned a few things I need to research further, including the relative safety of some kinds of sleeping pills relative to other drugs we use all the time. Tylenol, for instance, is a common drug that is potentially liver toxic, especially when combined with alcohol, at dosages not that much higher than the effective dosage. People are bad at estimating relative risk, which can be dangerous for us. None of that excuses the criminal arsewipe in the OP.

and it doesn’t help me sleep.

One of the short comings of diphenhydramine as a hypnotic is tolerance ramps up very fast. As in days fast. The other one is how quickly it gets crazy balls. 50-100mg is enough for WEIRD dreams. Go a bit beyond 150mg and you’re talking auditory hallucinations. More than that and you brush up on hell raiser territory. And as dose goes up it’ll paradoxically keep you awake even as it makes you super drowsy. Which is not fun.

Doxylamine on the other hand is a kinda crappy antihistamine. But its a pretty damn good hypnotic, broadly considered the best and most reliable OTC non habit forming option. Tolerance doesn’t ramp up nearly as quickly, its even safer than diphenhydramine dosage wise. There are fewer side effects and interaction risks.

Though it’ll leave you groggy in the morning. And its still not recommended for use more than a few days in a row, or for long periods.

I switched to doxylamine for an OTC sleep pill after bennedryl got real weird years ago. But really only take it occasionally when things get bad. It works a hell of a lot better, and has worked longer. But things like a better mattress and pillows and some other changes had a much bigger impact for me.

We used to market it explicitly for that. As well as in every conceivable remedy from hair tonic to antacid. We have the FDA for a reason.