Was it caused by chickens crossing the road?

For those who prefer red sauce: 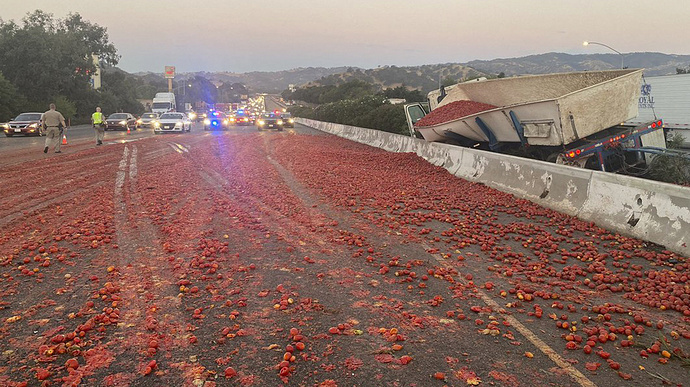 A truck hit the center divider on I-80 between San Francisco and Sacramento, Calif., Monday morning, slathering several lanes in quickly crushed tomatoes and forcing morning commuters to play ketchup.

There’s a clogged artery metaphor in there somewhere (pretty near the surface, really…)

And there was also a tomato spill the other day in California. Something something Italian restaurant.

Back in '98, a truck carry rendered fat overturned on a major part of I75S in Cincinnati. It was closed for about 3 and a half days until P&G suggested using Dawn dish detergent – which did the job. 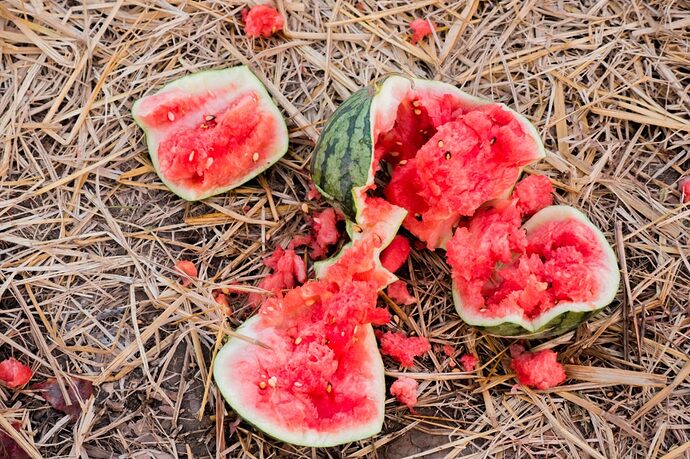 Last month a truck filled with over 100 watermelons and cantaloupes, on its way to the Louisiana Watermelon Festival in Farmerville LA, got into an accident that caused all of the fruit to fly off …

And there’s hamburger all over the highway in Mystic, Connecticut…

Local police are having trouble finding enough garlic bread to sop it all up.

Bet that smelled good in the mid-day sun.

Real alfredo sauce is made with just butter and parmesan cheese.

And from the Alfredo region of Italy?

In my head it was a tanker truck full of alfredo sauce, glad the local reportage cleared that up!

They were simply taking a stab at humor. Excepting rags and tabloids, very few newsworthy disastrous incidents can be slipped by with exclamation points.

“No! Don’t slow down to look! Keep going pasta!”

Dangit. Some Olive Garden is going to be short tonight.