This is superb. Lizards? Cocaine sniffs.

Rob, this is delightful. And occasionally suggestive. Pat yourself on the back.

Will you release your new toy so that we can play with it too?

Don’t you GET IT? This is just another level of The CONSPIRACY. You and you’re (sic) “GENERATOR” are unwitting TOOLS of the Reptilian ILLUMINATI Muslim Brotherhood.

Can’t wait for one of these to get picked up and ran with.

Dude - you have too much time on your hands.

If you want a new hobby, try safe cracking. Hear it is a fun, rewarding hobby that the whole family can share in.

Whenever I file a UI bug I attach screenshots that look something like this. Minus the conspiracy theories (or are they…).

If you write “lizard people” in one of your reports, there’s gotta be someone who looks at the report and should notice it but doesn’t.

Well, I wouldn’t be selling you no life insurance, is all I can am permitted to say

I appreciate that in one round there was yellow text on Hillary’s white suit jacket, because I’m guessing real conspiracy theorists think text and background contrast is just a made up rule that the secret rulers of our society concocted to subjugate the masses.

Coincidence? I don’t think so! 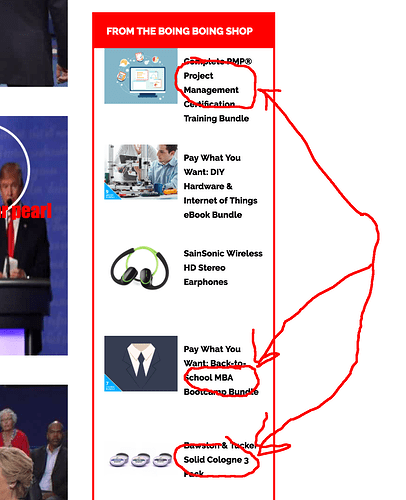 Post one to /r/the_donald, if you’re not one of the millions of the banned, and watch the upvotes pour in.

If you want a new hobby, try safe cracking. Hear it is a fun, rewarding hobby that the whole family can share in.

just FYI the iframes with the generator aren’t loading in modern browsers (ie Chrome), because you violated the Mixed Content policy. You’ll need to use HTTPS.

haha. Just because you can access Boing Boing with https, doesn’t mean it’ll work if you do

I am, but I want to run it through other speeches.

I can wait for it.

At some point I latched onto the principle, gleaned from friends: "Never do anything out of spite.
This ideal has since been extended to “harmless” jokes against the hyper-credulous or powered buffoons.

At first glance this may seem sheer moralism, but I assure you it is entirely pragmatic due to incidents such as:

After seeing enough similar incidents, I’m a little cautious about the outcome of intentional deception or sticking it to those whose judgement I find questionable.