Originally published at: An interview with the man responsible for Batman & Robin's infamous Bat-nipples | Boing Boing

Shouldn’t bat-nipples have been offset farther to the side just below the armpits? 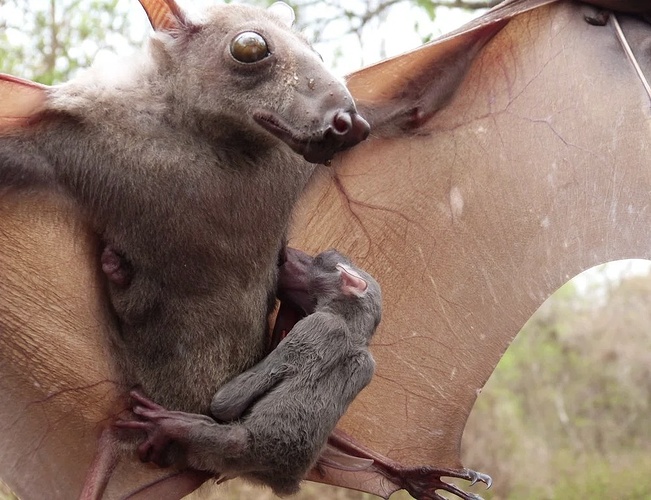 Of course putting nipples on a bird-themed costume is another level of silly entirely since Robin would feed his offspring via regurgitation.

Maybe chafing of the lateral nipples is the reason Man-Bat is always cross. 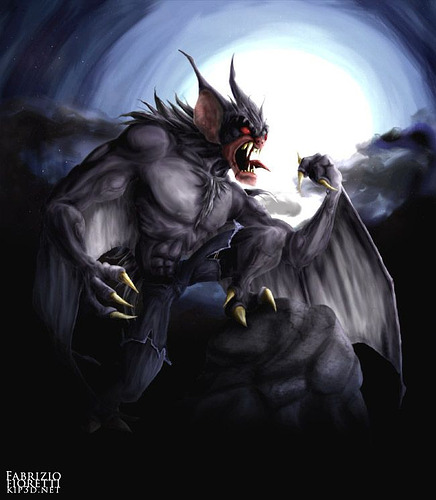 I also notice that the filmmakers took a more subtle approach with the bat-nipples on Alicia Silverstone’s suit, though she did get a corset and thigh-high fetish boots for maximally effective crimefighting. 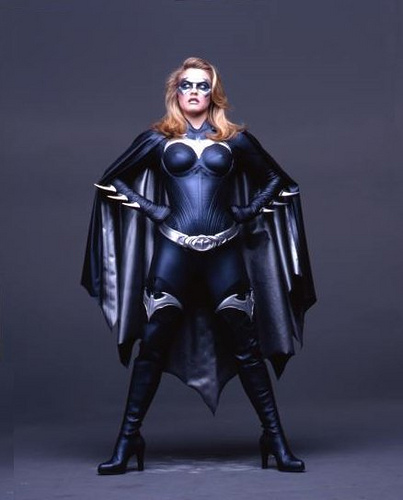 So - Batman Forever I kinda liked because they started to brighten it up more with the colors and lighting effects. I just wish that had translated more to the costumes.

Marvel, IMO, has a more pleasing aesthetics because their costumes are still largely colorful. I thin they could still punch things up. Comics are bright - maybe even a little garish at times, but that is part of their appeal. At least it was to me as a kid.

I think they tone it down to be more grounded, but it is silly fantasy with completely unrealistic powers. It doesn’t need to be grounded.

Marvel, IMO, has a more pleasing aesthetics because their costumes are still largely colorful.

Also you usually don’t have to strain your eyes as hard to see what the heck is going on. 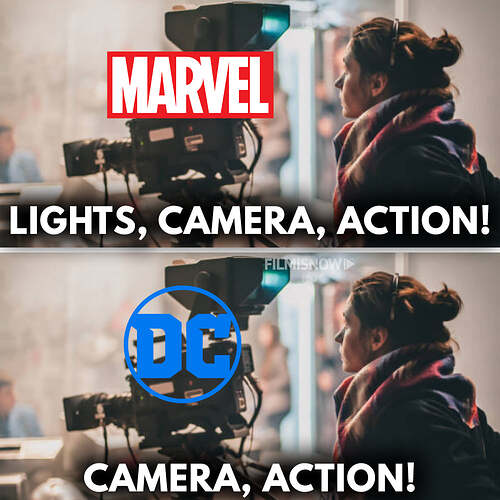 Not sure if I saw Batman Forever since it was in the theater. My memory is of it being more of a throwback to the TV show, and less like a modern action movie. I think the contrasts in characters, in color, tone, coolness, lack of coolness is better fleshed out in Marvel movies, in general. With the exception of Flash, everyone in DC is usually resolutely grim first, whatever else emotion they’re displaying is a distinct second. Captain America reflexively saying “Language!” and the team’s response or Banner embarrassing Tony in front of the wizards is much more engaging than the vast majority of what DC has done.

Even Burton’s Films which were dark in tone, had lighting. Bright areas to contrast the dark. Using the whole value scale. Especially the first one.

Hmm - it was harder to find some screen grabs of scenes than I expected. Not sure these are the best examples - but there they are. 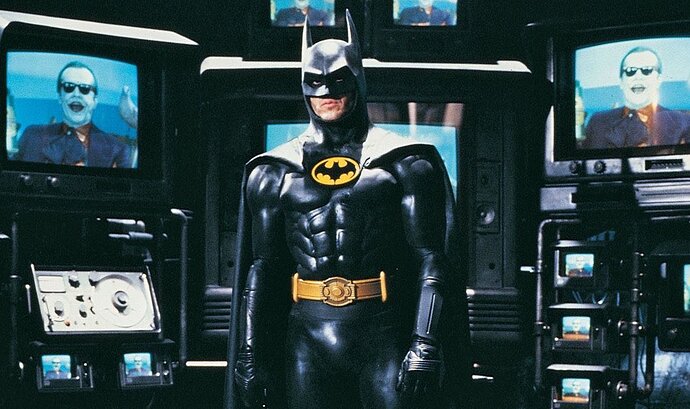 My memory is of it being more of a throwback to the TV show, and less like a modern action movie.

it certainly was campier. Which, in my mind, would be better served with more colorful costumes, vs toned down serious ones that didn’t really match the rest of the film. The villains were all colorful.

Not sure if I saw Batman Forever since it was in the theater. My memory is of it being more of a throwback to the TV show, and less like a modern action movie.

If they had just scrapped the continuity with the previous two films entirely and gone for a campy 60s style Batman they might have been able to make it work.

Go to the link. Nothing says Pride Month better than a story with “rock-hard nipples” in the headline. And a pink triangle behind Batman and Robin.

I know that Man of Steel would have been a lot cooler had it been colorized. /rimshot

(That’s another reason why I’m kind of a fan of the Saint’s Row game franchise, warts and all- IT HAS COLOR. (and utterly over to top wacky hijinks, a literal phallic weapon, etc.) It’s not 50 shades of dirt that still requires a beast of a graphics card to show every speck of dirt in fine detail…)

it was all made into a feature of the batsuit. I didn’t want to do it, but he’s the boss, so we sharpened them,

Schumacher seems like the kind of director you don’t want to give ideas.

And heels. Always fucking heels. I’d like to see a man stop someone cheating on their taxes in heels, never mind sprinting across a rooftop to leap from a ladder on to moving car to tackle a perp to the ground.

The Dark Knight Rises tried to make that choice of footwear into some kind of power move but I didn’t buy it.

Phillip Stryver: Nice outfit. Do those heels make it hard to walk?

[Catwoman kicks Stryver in the ‘nads]

Catwoman: I don’t know, do they?

Which is how you know a man wrote it. Men (and a few Stockholmed women) think sex clothing made for the male gaze is “empowering”. Because womens’ only route to power is through men, how and when they allow it.

Which is how you know a man wrote it. Men (and a few Stockholmed women) think sex clothing made for the male gaze is “empowering”. Because womens’ only route to power is through men, how and when they allow it.

Yeah. You might be able to make a (terrible, deeply flawed) argument that a character like Catwoman finds it useful to use her sexuality to distract her male adversaries, but, like you said, the women in these comics always wear the damn heels. Even Gamora, who has far too much self-respect (not to mention badass battle skills) to stoop to something like that is wearing frickin’ alien high heels into battle.

Very tellingly, when watching a movie with Catwoman or other similar characters in it, watch their feet during the fight and action scenes. With very few exceptions, the heels vanish during the quick cuts where the stunt people are doing the real physical action. There’s always a flats version of the costume boots that is worn for the stunts. This gives up the game that the heels are pure fantasy of course, which then begs the question, “fantasy for whom?”.

When DC belatedly allowed a woman artist to redesign Batgirl’s costume in 2014 she finally got some practical ass-kickin’ boots instead of heels. Likewise, Catwoman’s 2018 redesign (also created by a woman artist) seems to have flats appropriate for Selina’s gymnastic moves. 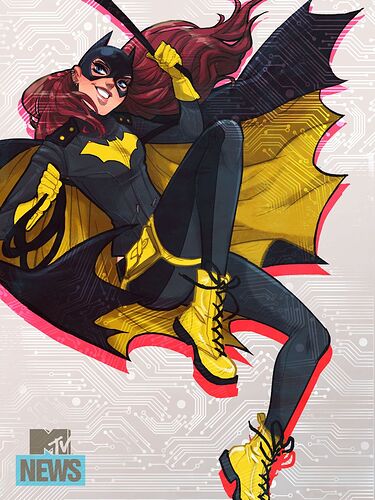 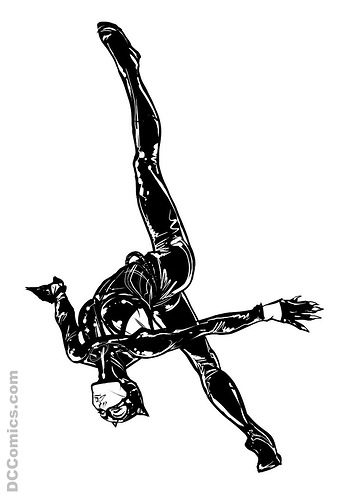