What do you mean by this? Do you mean that there are no people that hack, prank and socially engineer under the auspices of ‘Anonymous’? Because if your objection is just that the ensemble is not organized or cohesive, then that (and the explication of “Anonymous declares war” as a figure of speech for “some members urge a collective action”) is explained in Mr. Doctorow’s article.

Where or where have they been hiding these past 2 years?

That’s all the people running that twitter account do, run a twitter account on which they make ridiculous pronouncements and once in a while create a video with distorted voice over audio and lots of neat video game inspired motion graphics. Anonymous, this mythical distributed collective of hackers who allegedly expose injustice blah blah blah doesn’t exist. It’s just a made up image. “They” whoever “they” are, are completely ineffective. Remember that time when they vowed to expose all the law enforcement and elected officials with ties to the KKK and other white supremacy groups? LOL, yeah, get back to me on that.

What I mean by that is that around every six to twelve months or so, some gullible journos write a headline such as the above, “Anonymous declares war on…” or “Anonymous vows to expose …” and exactly nothing happens. “Anonymous” promised to expose all the KKK and other white supremacists in police forces as well as in government after the Michael Brown shooting. Zilch. Bupkis. Anonymous was supposed to get their hands on Trump’s tax returns and release them, ahahahahaa, yeah, ok. Remember when Anonymous told ISIS to disband? Anonymous is just bunch of trolls on the internet making neat videos with cool sound effects, who issue sternly worded twitter threats and accomplish exactly nothing. So, Anonymous as we are led to believe they are, the powerful shadowy decentralized collective of hackers, doesn’t exist. Anonymous, the bullshit twitter based group of trolls, does. 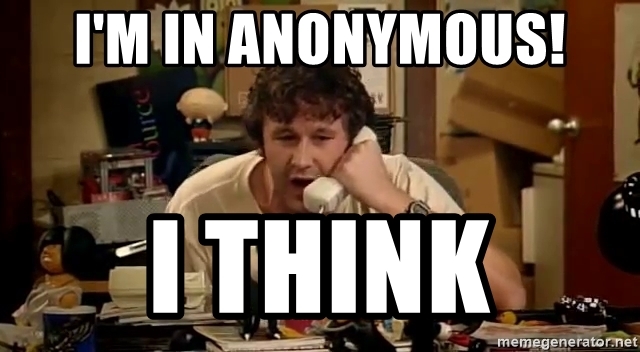 Theism is at its root, an attempt to explain natural processes through empathy: (thing) happend because (God/Gods/Bavarian Illuminati) wanted it to happen, and the reason they wanted it is (some version of a human desire: jealousy, love, anger etc)

It doesn’t make the trolls smarter, it makes them the same trolls as always pretending to always be smarter no matter what dumb stuff they said in the past. I mean on election night it was flooded with people bashing Trump and talking about how stupid MAGA was, because it’s more important to be on the latest trend and anonymity and lack of community means you can pretend it was never you on the wrong side.

And the “leftist” portion of /pol/ are just as myopic and cool with white nationalism as everything else. Even if it was a prank at first by someone knowingly choosing the novel Q instead of knowing the security clearance, the torch was carried far beyond that initial post and became a real thing keeping the pizzagate stuff alive since it was all the same people involved basically.

And the 30 year old boomer meme itself hasn’t spread very far, because it is extremely dumb. I mean, below the normal low bar.

Qanon told the world that “John Podesta is going to be arrested on Nov. 4th 2017 and riots will start in several major cities as the military takes control”, and it didn’t happen, BUT they still keep believing Qanon is real, so how can anyone stop Qanon? It’s like arguing the logistics of Noah’s Ark with a Creationist.

Even if the person/persons behind Qanon comes out and admits it was just trolling, there will still be dumb-ass Trumplidites saying “it’s all part of the plan.”