This is only acceptable if it’s some mass-produced piss beer like bud or coors.

Ludington, a professor at North Carolina State University, will be speaking about Kavanaugh to the FBI today.

Has there been any conclusive answer as to whether the FBI will be allowed to include such testimony in its investigation? Various media reports have stated that despite Trump’s claims to the contrary the FBI has only been authorized to interview four witnesses: Mark Judge, Leland Keyser (a high school friend of Ford’s whom she said attended the party but was not told of the assault) P.J. Smyth (another party guest) and Deborah Ramirez, the woman who says Kavanaugh exposed himself to her at Yale.

or, boys will be buttholes, you decide.

Donald Trump sure knows how to pick nominees who will bring the same degree of honour, decorum, and probity to the office of the Supreme Court as he himself has brought to the office of President.

I don’t know if it would matter. They aren’t building a criminal case in which establishing his character would sway a jury, they’re trying to establish whether any evidence of assault(s) exists. In public opinion all of this is quite damning, but I have a feeling that the only thing that the FBI can find that will sway this is direct evidence of one of the two incidents being actively discussed.

Sometimes we hurt the things we love the most…

Anyway, does any of this matter? Hearsay etc, etc. Will this at least be part of the FBI investigation so that it can be documented as part of a character study? Or will it be so limited that such events won’t be made to light in an official setting.

If you can get half a dozen people to make statements under oath, that is pretty damning.

The FBI's contact with Charles Ludington, a classmate of Brett Kavanaugh at Yale, is a new development in its background investigation.

This is only acceptable if it’s some mass-produced piss beer like bud or coors.

They don’t call it the Silver Bullet for nuhin’, Bro!

It would appear that the FBI has (belatedly) been let off the leash a bit.

The White House authorized the new directive after a Democratic outcry, but the bureau must finish its investigation by Friday.

They aren’t building a criminal case in which establishing his character would sway a jury, they’re trying to establish whether any evidence of assault(s) exists.

They’re also presumably checking to see if the accusations are credible.

For example, if the FBI found evidence that Dr. Ford received a big mysterious payment from George Soros just before lodging her claim against Judge Kavanaugh that would be pretty good information tor the Senate to have.

Conversely, if a bunch of other alumni from Dr. Ford’s high school come forward saying stuff like “Oh yeah, Judge & Kavanaugh used to be known as ‘Captain Blackout & Mr. Gropey’” then that too is something the Senate should consider. 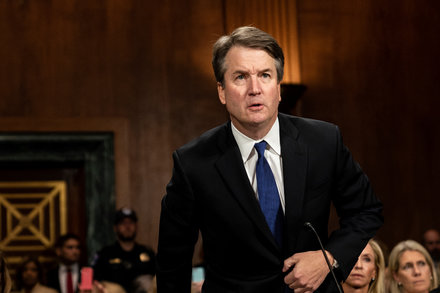 Kavanaugh Was Questioned by Police After Bar Fight in 1985

As an undergraduate at Yale, Brett M. Kavanaugh was involved in an altercation at a bar during which he was accused of throwing ice on another patron, a police report says.

Demery’s was not purely mindless fun. Many Yale students stayed away from the club for fear of the regular “Friday Night Fights.” Yalies of the era described teeth punched out on the dance floor, shards of glass in roommates’ arms, and crutches smashed to bits against a heckler’s body. There would often be an ambulance and police car waiting in anticipation across the street.

Seen by some as rowdy, violent, and dominated by Yale jocks and locals, Demery’s was not a welcoming space for many LGBTQ+ Yale students.

It was “not a place for anyone who was out,” an alumnus told The Politic. “I was in [Yale residential college] Morse, so I had to walk by it every Friday and Saturday to get home. I knew to keep my head down, [not] make eye contact, move like water, flow around people.”