Anyone else scared about the news out of New York?

Apparently many police there have been angry at the protesters and at the mayor for criticing them, and some police apologists have been saying the mayor had better get protection.

So the head of the police “union” there has been saying the protesters and the mayor “have blood on their hands,” and some police apologists have meen saying the mayor must resign.

I am not just angry about this, I am scared that the police will escalate violence against protesters and minority communities, and possibly attempt a coup against the mayor.

i wish some noteworthy celebrity who is a lifelong new yorker would make a statement demanding that patrick lynch resign immediately as head of the police union. the man has lost any credibility as a defender of the general public by blaming citizens who have been protesting to air their legitimate grievances for the murder of two police officers. after all, no one was allowed to blame sarah palin for the shooting of gabby giffords despite her violent rhetoric.

edited to correct the last name of the police union chief. i regret the error.

remember, this is the same police force that rioted 22 years ago when the mayor tried to create a civilian review board–
http://www.nytimes.com/1992/09/17/nyregion/officers-rally-and-dinkins-is-their-target.html?pagewanted=print

According to Guilliani, de Blasio should have “arrested to protesters” because that’s apparently his job now?

After shooting his girlfriend Saturday morning, 28-year-old Ismaaiyl Brinsley of Union City, Georgia traveled from Baltimore to New York and gunned down two NYPD officers, apparently in retaliation for recent police-related homicides. According to...

I am scared that the police will escalate violence against protesters and minority communities, and possibly attempt a coup against the mayor.

That would be quite frightening, actually. Then a police state (at least a police city) becomes more than just rhetoric, but an accomplished fact.

Edited to add link - which seems unrelated, but the cop shot in this case used to be NYPD: http://nypost.com/2014/12/21/former-nypd-cop-gunned-down-in-florida/

It was Patrick Lynch, not Patrick Ryan, according to the Guardian.

If they want to open the Pandora’s box of “blame rhetoric”, it’s Patrick Lynch and the police union that are the ones with “blood on their hands”.

If the union acted like a proper frakking professional body and moved to expel the so-called bad apples from the force, instead of playing the thin-blue-line-us-against-them-you’re-either-for-us-or-against-us bullshit that usually follows egregious examples of police malfeasance, then they wouldn’t be in this fucking mess to start with.

If the public had faith in the institution, there would be no need for protests and vigilantism. Accountability, not circling the god damned wagons Lynch. You stupid, stupid fuck. 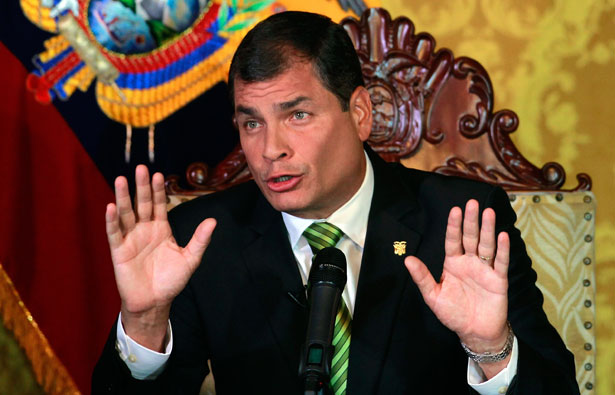 How to Survive a Cop Coup: What Bill de Blasio Can Learn From Ecuador

In late 2010, Ecuador’s Rafael Correa faced down a cop revolt and won—emerging stronger and more popular.

So the head of the police “union” there has been saying

of one, of the three, unions.

I am surprised that police aren’t shot more often, honestly. A person with a gun, sneaking around, who’s response to casual questioning is threats? Sounds like a recipe for disaster in any case. Shooting them first when a violent scenario is witnessed would be an easy “mistake” to make.

I’m scared it’s taken this long for some payback.

The first thing that struck me when I read that statement from Lynch, was that it sounded like the sort of statement that would be issued just before a military coup.

I don’t think there will be a literal coup. However, I think that in many US cities, the primary purpose of the municipal government is generally understood to be to finance the police department. And the NYPD is immensely powerful. (How many television shows have there been about just the NYPD?) So I think what will happen here is that de Blasio will either totally capitulate to the demands of the police, or will resign.

I’m scared it’s taken this long for some payback.

I hear you. Generally, the longer it takes for people to start fighting back, the nastier and bloodier it is when finally they do, and the more innocents will suffer.

This topic was automatically closed after 789 days. New replies are no longer allowed.