So Scott Adams has a new book out, apparently all about how great he is for having predicted Trump’s win. Oh, and how great Trump is, because he was the most successful candidate at manipulating others to buy his personal brand. And how you too can succeed, by emulating Trump’s methods.

Nevermind, I guess, that Trump actually lost the popular vote. Oh, and morality too – nevermind that either, I guess.

Adams seems uninterested in moral issues. He never discusses whether some ploy in the service of one’s brand is the right thing to do, just its efficacy. He would have endorsed Clinton had he found her messaging game superior — or Bernie for that matter. It’s good of him to let us in on his secrets and deeply held beliefs, but please Scott, What are politics for? What are we trying to do here? If it’s all about winning as bigly as possible, then we’re doomed.

Yeah, Scott Adams is an asshole. It was cute when his brand of assholery was punching up, but now he’s adopted the bicycle pose: kowtowing to those above him, and kicking at those under him. 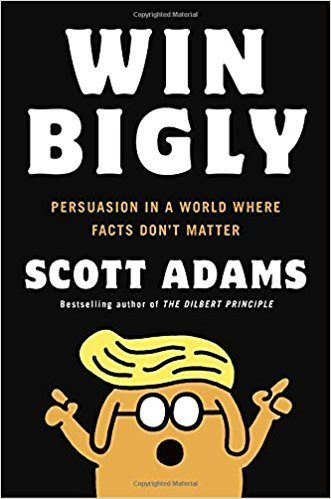 The amoral pretty much straight-up evil Catbert would’ve been a much better choice.

Catbert is a fictional cat, and the "evil director of human resources" in the Dilbert comic strip. He was supposed to be a one-time character but resonated with readers so well that Adams brought him back as the HR director. An unnamed cat appeared in two 1992 strips as the companion of Dilbert's "perfect romantic match"; he or she strongly resembled the later Catbert design. The real Catbert, unnamed, first appeared in a series of comic strips from September 12 to 16, 1994, when he attacked Rat...

Scott Adams is both an asshole and an idiot. Too bad, I used to like Dilbert, but now I’m afraid to go back and reread the older strips, for fear that the madness shines through.

Trump’s “personal brand” was truly awful; he and his campaign did an epically poor job of selling him. His campaign alienated vast swaths of America (on purpose?) and disregarded most of the country to hyper-focus on his small, enthusiastic base and the swing states that would win the Electoral vote with the help of his amoral legal team that ensured nobody could look closely at the faulty votes in those states with razor-thin margins.

But I guess that makes a less entertaining book than pretending you helped Trump win with the help of your troll comic strip.

Me too, but at one point I liked Perot.

Younger us was dumb.

I would have thought that he’d be able to see through pointy-haired bosses when they have no clue what they’re doing, but evidently not.