I find pawn shops fairly respectable. The pay day loan people are crooks who need to be shut down. 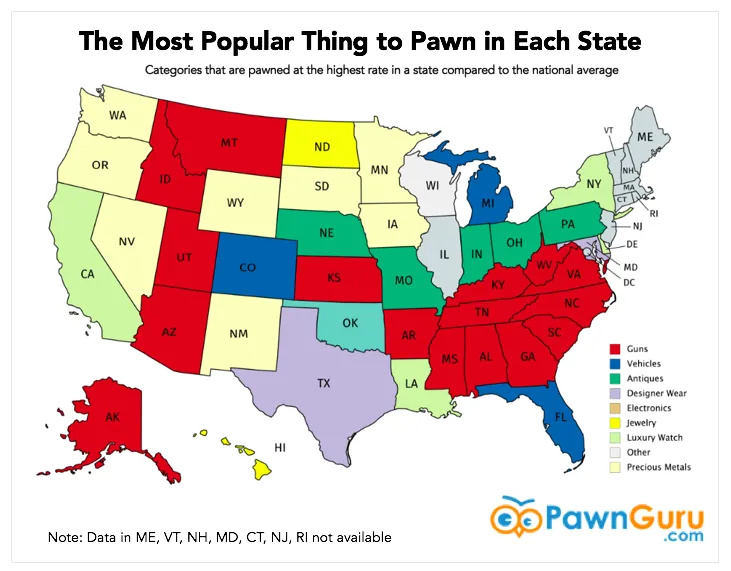 20-ish years ago I used to pawn a lot of video game/CD/movies, until I learned how to stay more within my means. I don’t think I’ve even been in a pawn shop in over 10 years now.

So, does the iPhone 6 fall under electronics or antiques?

Yes, pawn shops aren’t making money out of other people’s misery at all. Oh… wait…

Seems like things that “keep their value” end up having a value 1/5 to 1/10 the retail price at best.

Something weird happened. Either there were a bunch of categories that got left off the key (and the color selection is really poor to start with, with unused categories and too-similar colors), or someone hand colored the map and got really sloppy with color selection.

Me, the only times I’ve set foot in a pawn shop are to buy or sell musical instruments, which makes me one of the 2.9% of Americans to have done so.

Occasionally I pop in the pawn shop near my house to look at the guitars but I’ve never seen anything worth buying. It always seems so expensive for used merchandise. Maybe I just have unrealistic expectations about how much cheaper used items should be than new times, but $400 for a Indonesian-made Squier? What do those cost new, like $401?

I’m going with “its creator lives in the tiny spot where Edward Tufte books are the most-pawned item; and no longer has them for reference”.

I have bought some stuff in pawn shops, back in the day.

Used original Xboxes to mod and run XBMC, and some used DVDs and Blu-Rays. The prices were way cheaper than anyplace else at the time…

It is interesting to cruise local thrift stores like Goodwill to see the walls of small appliances and kitchenware that all seem pretty similar.

If (for example) you’re planning on buying a bread machine, carefully check the reviews, and look at your local thrift stores to see what other people have gotten rid of before making a purchase.

What’s a “Michael Kors watch”, and why is it worth so much less than the average pawned watch?

The Testicles de’Medici cast a long and ominous shadow.

Wait… you mean to tell me that every possessor of (one hopes typically figurative) ‘big brass balls’ has actually been a downmarket imitator of the Medici big gold ones since the 15th century?

Michael Kors watches cost about $250 retail. They’re marketed as “luxury” watches at big box stores like Wal-Mart and Target where the people who tend to end up at pawn shops buy stuff when times are good.* Perhaps that’s why that particular brand bubbled onto the list.

Whatever the retail price, you’re getting a small fraction when you pawn. Owners of actual luxury watches don’t do much better in that regard.

[* affluent people shop there, too, but they buy high-end watches for thousands elsewhere]

Pawn shops aren’t perfect, but what other options do some people have? Also they do a lot of business where they just buy the goods, not pawning. You get a better price that way.

But their interest rates are way lower than the payday loans, usually because they have already been legislated with limits.

I guess it is like how going to Disney World makes airport food prices seem reasonable.

Pawn shops aren’t perfect, but what other options do some people have? Also they do a lot of business where they just buy the goods, not pawning. You get a better price that way.

When i was a child here in the UK There was one (1) in the city where I lived. Now there are two or three in small villages. When I visited America I was startled by the number of pawnshops. The thing is - it is an indication that your social safety-net has failed. The fact that they exist is a Bad Thing. Here in the UK one party has been whittling away the Social Security for decades. Now we have beggars in the streets, homeless people on every street corner and families depending on food-banks to keep body and soul together. I remember when it was not like this. It can be done. What other options do people have? Not much - at the moment. Bring back a rational social welfare programme, and stop funding corporations that don’t need it.

I think there’s confirmation bias data mining happening in that “top 10”. Why did they break out Apple devices, but not the 50 types of guns people pawn? There are many many kinds of diamond rings, but they choose to distinguish between different iPhone 6 models and give them their own lines in the top 10?

Yes, pawn shops aren’t making money out of other people’s misery at all. Oh… wait…

They absolutely are, as well as giving poor people easy access to lethal but hard to trace weapons… so that once they reach a certain stage of desperation and hopelessness, they use them on themselves or others, thereby perpetuating the ongoing cycle of misery.