Babymetal is coming to Rock Band 4, so let's listen to Babymetal

Definitely need a chaser after that. And a unicorn just won’t do.

From what I can tell, Su-metal Yuimetal and Moametal sing. They don’t play drums. They don’t play guitar, or bass, or bang the keyboards. So how does that sort of style play on Rock Band? At least it’s not Guitar Hero.

That sucked my will to live.

Maybe I am in the minority but I find the fact that Kawaii Metal even existing is evidence that the world is an awesome and wonderful place.

This reminds me of the intro to Brütal Legend: https://www.youtube.com/watch?v=I9z7zM5W35Q

Sweet. I can only assume that LadyBaby will be announced soon as an exclusive for the PS4?

Brainstorm! The one thing Babymetal needs is… their own anime! They could battle the forces of… I dunno evil or something!

I’d rather watch a BabyMetal OVA than the Jem movie.

Confessed fanboy here. The posted videos are all over 2 years old and not a good example of what BABYMETAL are currently up to.

Something cool happened to them since then…the girls started being invited out to play metal festivals around the world, and they started off by touring with a ‘backup band’ who would just mime playing instruments behind them.

When they decided to start using actual musicians, real Japanese metal musicians jumped at the chance to play shows in Europe and the US, along side acts like Judas Priest and Metalica. So they essentially got their pick of the very best of Japanese metal guitarists and drummers. There are a set of 7 or 8 of them that take turns touring with them now and they’re altogether awesome.

Check this video out from an outdoor festival in Japan this summer for a better idea of why people might be fans:

Strangely… I like this! This is awesome!
I like the sound of some deathmetal music but usually can’t take the ultra-serious, over-dramatic attitude. This kicks its ass!

They’re actually huge Metallica fans. They opened the Reading Festival main stage last month, and Metallica closed it at 10PM, and they stayed around to watch from an awesome backstage vantage point: 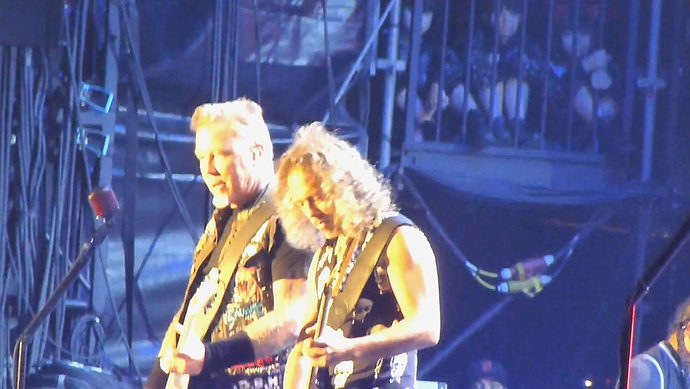 It’s what I point to whenever people ask for hard evidence for the many-worlds interpretation.

I love babymetal but I didn’t know this, holy shit, this band is awesome!

Fantastic! But I’m sad that their La Parka backup band lost it’s job in favor of the Japanese zombies.

I’d be more impressed if they could do the growl!

She’s not quite Masha Scream, but pretty awesome nonetheless

This is entertaining but I don’t know why “death metal” is even being brought up in this context. Even aside from the lack of the typical screaming/growling, this is not even remotely death metal. This is power metal through and through. The performance @Trent_Boyett linked could very easily be mistaken for a DragonForce cover. (Not that there’s anything wrong with that! DragonForce is a lot of fun, but let’s get the terminology at least in the ballpark.)

This information and video has really made me reassess the group. I completely dismissed their earlier debut and videos as a gimmick. But now that they’re no longer literal children and playing with a really solid live band, I can understand and get behind the appeal.