Badass Delvers of the Dragon: The Gilded Gosling

At Ridwhick Encampment, you easily trip over the largest and most frequented marquee tavern, signed by a hanging gold-painted goose. Conflict has always found its tendrils into the many tent-based public houses, and would reside within if not for the Monarch’s guards.

The Gilded Goose’s publican, Amma, is rather burly for a Lizard-woman. Her prehensile tail enables her to pull three pints at a time from the bar’s limited number of kegs. You best duck if she’s bringing drinks to a table.

The entrance to the underground is heavily guarded, on both sides of the gate. Not just anyone can go in, and not just anyone can come out either. The troops protecting the camp from the cave seem especially edgy. You are prevented from going in until you have the right papers.

There’s lots of people in the camp. Lots of shops, lots of tents. Anything could happen above ground. Who knows what under it.

Missions must be completed by 12:00 UTC September 1st

Starting with the first challenge, tell us what you’re trying to do. Then tell us which cliche your character is using to make it happen, and what troubles they face. Then have Discbot roll a d6 for each point that cliche has. Surly Digger (3) will roll 3d6. Roll one less dice if you want to handicap yourself.

Every cliche is appropriate, with the right roleplaying. In Risus the GM will tell you what cliches are appropriate in any challenge, but that’ll slow us down, so you pick. Story comes first. Tell a good one, or at least make it funny!

Kimba looks around the merchant camps for clay or glass vessels. The merchants who have expensive taste have posted hired-guards, so inspecting the backs of caravans isn’t going to be easy. After finding a good mark, she waits for her moment to blend in with a group of engineers making trade with them.

Discbot will then tell you what you rolled, recording it for posterity.

If you roll higher than the difficulty, you were successful! Tell us what happened, then move onto the next challenge. Use the same cliche, or switch to another.

Kimba sneaks out of the group’s negotiations and finds a case of dark malt whiskey on the back of a merchant’s cart.
She sneaks onto the back of the cart, and puts the bottles in her backpack, clinking loudly. Getting out of the camp quietly is proving difficult.

If you roll the difficulty or less, you failed. The tested cliche will LOSE ONE POINT and you fail the mission. The GM (or any other player can step in) gets to tell us what happened, assuming the role of the victor. If it was close, maybe not much. If it was a critical failure, tell us how it went down.

Kimba is identified by one of the dwarven engineers, and is asked to leave. “What are you doing here? You’re not one of us, get lost. You best not show your face around my tunnels!”

Kimba may have trouble working with dwarves in the future. She rolls at -2 disadvantage (Xd6-2) on her next challenge involving dwarves.

All lost points may be replenished after resting that cliche for a Round: if you don’t use that cliche on your next round/mission, it will regain all its lost points.

No teamwork yet, I’ll explain that in the first real round. As this is a test round, any questions, let me know.

Maybe ignore roll commands that are in blockquotes? 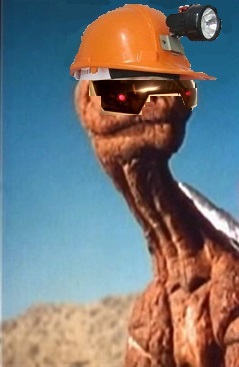 While still a mewling hatchling whose forelegs hadn’t thoroughly sprouted yet, SssubTerry learned the family crest from his sainted mum. He couldn’t name most of the colors since his visual spectrum ranged pretty deep below the infrared but topped out somewhere in the middle of green, nor could he remember which of the long-extinct animals was supposed to be rampant and which should be passant, but he never forgot the motto: Ego mordere.

With that at the forefront of his mind, he considered how best to get in good with Amma, the proprietor of the Gilded Goose. The crowds were still coming to Ridwhick, no doubt attracted by the same scattered leaflets promising wealth beyond the dreams of avarice that stuck to SssubTerry’s goggles as he and Stegma crossed the River Urea last week. It was proving hard to attract Amma’s attention due to all the boisterous custom straining the seams of the Goose’s tent, but when Amma bellowed in a stentorous roar that “I sssaid we’re all outta Mike’s Hard Mooselikker, the barrel ran dry an hour ago, ssso if you want me to mix up a round of Russsty Antlersss, yer gonna hafta pissss up a rope!!” SsubTerry knew what to do.

“To the Knuckle. They got sssomethin’ we need there.”

“The Knuckle? Boss, I ain’t sure that’s a swift idea. They don’t serve our kind there.”

“I’ll be in and out in a flash. You jussst ssstand outssside the loading dock and play dumb.”

“Now you mention it, yeah. I think in a couple weeks I YEEEOOOWWCCHH!!! What’d ya hafta do that for, Boss?”

“Don’t be a cryosaur, it was coming off sssoon anyway.”

“Not this week. Whaddaya need one of my dorsal plates for anyway?”

“Perfect. I don’t have a Sharpie either.”

SssubTerry scrawled a few quick letters on the plate with a foreclaw.

“Same as it sounds.”

“Figure it out yourself, Boss. I’m in no mood to be helpful right now.”

“Fine. You’re a cold-blooded bassstard, you know that?”

“I do. So is everyone you know, which state of affairs will not change until we reptiloids start practicin’ matrimony or hangin’ out with mammals.”

“It’sss a figure of…! Aw, never mind. Wait here. No, clossser to the door. Cassst all the shade you can on it.”

SssubTerry scurried into the darkened tentflap with the scale in hand.

“Now… where do they keep the Mike’s Hard Mooselikker?”

He blinked a few times and tried to adjust his goggles.

A couple more blinks and SssubTerry found the barrel he sought. A rustle from the front of the tent made him hurry. He licked the still-sticky back of the dorsal plate and stuck it onto the barrel over the label.

“Hey! Lizard-dude! Whaddaya doin’ in my tent,eh? We got nuthin’ your kind likes to sip, don’tchaknow.”

“Heh. Heh heh. Ah haw haw haw! Sure, of course they do! Well, get movin’ little polliwog! And getcher dadblamed dinosaur outta the driveway. He’s blockin’ the sun, and I can’t see a cussed thing in here!”

SssubTerry scooted the heavy barrel outside, then paused next to Stegma to catch his breath.

“Now we sssee if you can haul thisss back to the Goose without ssspilling.”

“Sure I can. I’m built for heavy payloads. I’m just not entirely sure I want to right now.”

Hmm. Okay, somebody wanna tell us what happened? Did we spill, or get caught, or what?

Goddamn, it was close!

So, we have three sub-challenges, do we have to complete all three?

Do we have to use a separate cliche for each challenge?

Do you want us to split this into three posts, or wedge them all into one, as if we assume we’ll pass each one?

Seemed to me that if I didn’t pass the first stage, there was no point in imagining and typing up the second. Since I made it through the first and (barely) failed the second, my turn is over and someone else (GM or player) gets to tell us how I failed. That’s my understanding.

So, we have three sub-challenges, do we have to complete all three?

To earn the mission’s reward, make it through all three challenges.

Do we have to use a separate cliche for each challenge?

No. You can use any cliche as many times as you like for a mission.

Do you want us to split this into three posts, or wedge them all into one, as if we assume we’ll pass each one?

Split into three, so we can see if how you fare on each challenge.

Alrighty, let’s get started then.

locate and ‘liberate’ the drink: difficulty 5

D’Melzaa found her way to the sign of the Twisted Sister, and engaged some fine moose fellows (already three sheets to the wind) in conversation. After a few moments of idle chat, one of the drinkers pulls out a deck of deck of cards and they start to play poker, badly. She observed this for a while, before making a quick proposition.

I reckon you can’t beat me at poker EVEN if we pick our hands out of a face up deck AND you pick first! Tell you what, if I’m wrong, I’ll cover your tab for the evening, if I’m right, you buy me a bottle of the Sister’s Famously Peculiar Olde Grog.

Obviously, the mooses (meese?) think this sounds like an easy way to get their substantial bill paid, so they jump at this.

Look at that! A draw! I bet you couldn’t beat me. Feel free to draw more cards if you want.

The moose are not happy.

D’Melzaa takes the four tens from the face up deck and a king.

No Royal Flush for the moose, the best he can do is a nine high straight flush. But that beats D’Melzaa’s Four 10s. Not so fast, mooses! D’Melzaa now gets to pick new cards - she disposes of three of her tens and her spare card and takes the jack, king, queen and ace of the matching suit.

Two bottles of Grog, if you please, meese.

I’ve got a d30 here, if anyone wants me to throw that.

Grunter wanders amongst the many makeshift taverns until he spots what he’s looking for. The Lumpy Onion is a small, quiet establishment, away from most of the crowds and near the end of a row of tents. Perfect!

“Hey doggies! Who wants the ball? Who wants it? You want it? Here we go!”

Having whipped the dogs were in a frenzy of ball-chasing excitement, Grunter glances around to check nobody is watching then pretends to toss the ball into the Onion. The pack runs into the pub, knocking over chairs and tables in their hunt for the ball. Grunter waits a few seconds then sprints in after them, screaming

“HELP HELP! IT’S A PACK OF MAN EATING WOLVES! EVERYBODY RUN FOR YOUR LIVES! AAAAAAAARRRGGHHH!”

With the few patrons and barkeep out of the way, he steps behind the bar, grabs an untapped keg and walks out through the back of the tent