Yep, if you set high standards it’s really hard to find a good apartment. I note from her map that pretty much all of the suburbs were out right from the start, which is going to complicate the process even more.

There is undoubtedly going to be more drama about this when Gainax of course fails to pay her and she starts to get behind on the rent.

Oakland, San Leandro, etc. aren’t 'burbs? I looked in every city from Oakland to Union City.

Can someone write some framing context from inside anime/otaku culture? I get that she’s working for a half-shady/half-clueless tiny company, and everything is going to be really bad soon, but why are the things she’s interacting with significant?

In other words, what makes this something more than a shaggy dog story about hating your first job when you were young and clueless?

does it need to be something more? i like the art and there’s nothing wrong with personal history.

I don’t know about 89, but Oakland today is as far from high standards as you can get, sure on the one hand the got the Raiders, but on the other hand, you got the Raider’s fans!

No, you always rent the 70’s apartment!

Shag and avocado appliances are the shit these days…

For Tucsonans…I noticed the other day that Casa Video has “Warriors of the Wind” (VHS, of course). Big disclaimer sticker on the outside.

Please excuse the interruption, but why is there a “next” button on this page?

This is how “living history” is told.

Small question: What’s with the wrought iron door knob? Was it considered cheap of the time?

I believe she’s referring to the balusters. Although they’re becoming fashionable again, the wrought iron railings were probably outdated looking in the apartment (and yes, they generally were the cheapest option).

There’s a missing helpful arrow that should be pointing to the railing.

Gainax is responsible for all kinds of classic anime, but it sounds like they suck at business. They’re not the only studio with a huge reputation, but pretty near the top of the pile.

I got into anime big time around 1991 or so, when I was in junior high. Back then it was a very small subculture in the USA. We literally would download translations to anime from Usenet (rec.arts.anime) and email lists and such, print them out on our dot matrix printers, and then read them as we watched anime laser-discs we had imported from Japan. I’m not kidding.

So Gainax was (relatively) big back then for us anime geeks, definitely one of the first anime studios that put some effort into this fledgeling US-based anime subculture. One might say that as a junior high-aged anime geek, the idea of working as the US director for such a studio would have been, like, the ultimate geek fantasy.

Fast-forward “a few” years, I’m now 36, and understand how the world works in much more detail than I did then. I work in the media industry (on the tech side), and now realize that working in media is waaaay less glamorous for most of the people involved than most “outsiders” would imagine. I still love anime. And having this perspective from someone who was “on the inside” in the early days of the US anime geek subculture, and seeing just how shit it actually was, is pretty interesting and funny, and kind of heartbreaking at the same time.

So keep it coming!

I cannot believe I missed that. And that’s what they are called–huh.

I bet they were tacky painted gold. Which makes me wonder what people in the future will think of the current trend of stainless steel appliances and granite countertops.

Nope, avocado green was first offered as an appliance color in the 60s, shag rugs became very popular in the 70s, but they were around in the 60s. (Shag goes back centuries, but we’re talking only about this particular hideous place.)

Oh my god. I remember well what a travesty Warriors of the Wind was, but I had mercifully forgotten the box art. Featuring Sir Not Appearing In This Film! 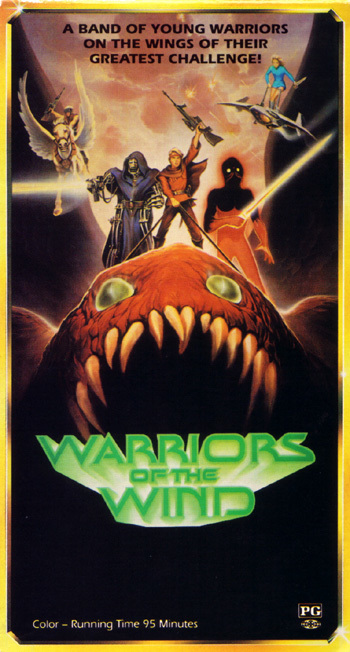 This abomination is why Miyazaki didn’t let his work be translated into English for decades.

Most likely they will think “how disgustingly unsanitary”, since granite is so porous you have to seal it regularly, and stainless is a near-perfect medium for culturing bacteria harmful to humans.

It’s a triumph of appearances vs. realities, and thus perhaps a perfect metaphor for our times.