One of the many reasons that grown men should not bring gloves to watch a baseball game.
It’s not like if the first baseman is hurt the manager will see the guy in the stands and ask him to play.

Uh - they do it to catch foul balls, which are moving pretty damn fast. People get beaned a few times a year.

They also don’t like it when we bring bats to hit them back to the field again.

This is from April 2016, but yeah, he handled it right; even got on Jimmy Kimmel the next week. His fiancee seemed overly mortified but it seems that that kind of ejection also carries a stadium ban… 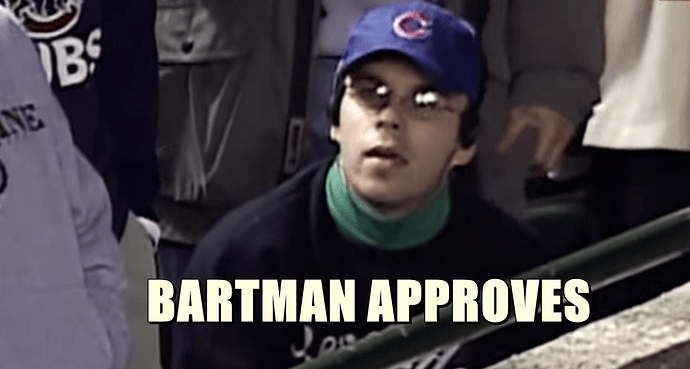 you’re kidding me - was he actually banned?

If you interfere with a ball in play at the Giants (and probably most places) they toss you out of the park. And rightly so. It’s understandable, but inexcusable, to reach out like that – and that wasn’t even a close call.

They do not, to my knowledge, ban you from the park for a first offense.

Don’t worry, Mr. Play Interference. This will only exist on the internet forever.

Did they let him keep the ball at least? /rimshot

One of the many reasons that grown men should not bring gloves to watch a baseball game.

If it’s hit into the stands, you have a better chance of catching it if you have a glove.

I imagine the chances of actually catching one have changed with the erection of foul ball nets.

Yes it was a huge mistake but he reacted honestly and left without a scene.

And the woman’s reaction is priceless

Ugh, and some people like myself had finally forgotten. He did not murder a ballplayer. This should not be a life sentence.

Besides, the curse is broken. It’s all good now.

So excited about baseball.

So ignorant about baseball.

Don’t worry. The ban is lifted if the municipality ponies up the cash to build a new stadium.

The gf’s reaction was a bit over the top - lol.

Can a non-American have a quick explanation of what happened?

Can a non-American have a quick explanation of what happened?

It’s just an extrapolation of the infield fly rule.