The “Hey Jude” box is missing a self-loop for the end of the song.

This is a bad flowchart, since the linear branching allows for verses using combinations that don’t go together in the original lyrics. It begs the question, if you make this chart, why not at least have it make sense in a world where there is a point in such a thing.

Also missing “the minute you”-> “let her under your skin”

LucidChart (or some LucidChart fan) did a great video on this premise to show how easy to use their flowchart product was. Shame the YouTube version got DMCAd and muted. 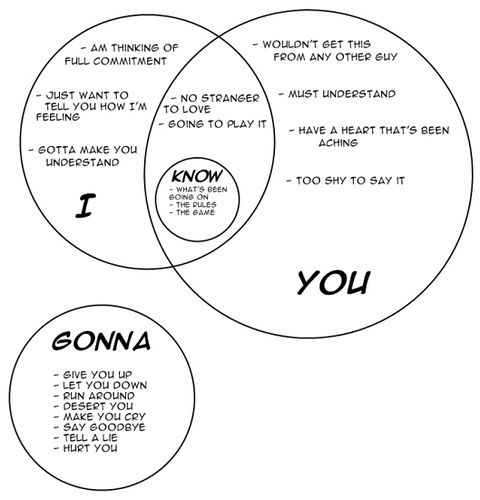 I hear that there are actual lyrics later on in Land of 1,000 Dances, but other than the occasional 'I said,' I've never listened long enough to hear any of them.

Is John yelling “fucking hell” at approx 2:38 part of the flowchart?

♪♫ Hey, dude
You think yer bad
But you’re a sad sack
And she’s no better…♪♫

That final na-loop actually made me snort.

Also needs an arrow back from Hey Jude to Na.

The outro deserves its own flowchart

I feel like a true flowchart would have “Make it bad” in a conditional diamond with “Do” and “Don’t” as possible choices. But then how would that play out? Not sure.

Why was this put in flowchart form? Clearly a state machine would be a better fit, and it would be far more nerdy.

Flowcharts are not nerdy.

Never any time to feel the pain also. I loved the part about the shoulders.

BUT it looks cool.

This is one of those maddening songs where I know the first couple of words to each line, then invariably I sing along to the wrong completion and it turns into “let her inter mawarwa mnmm…”