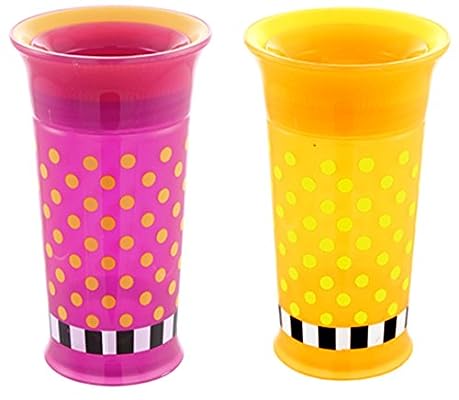 This Ad is for a GEENNY Designs Children's Lamp Shade which is especially designed to coordinate with their nursery bedding sets to help complete the look & feel of the entire bedroom theme for your k ...

We are on our 4th child and discovered the linked to sippy cups about 6 months ago. They are really, really great. our 18 month old loves them. They are super easy to clean. They don’t leak at all unless really shook hard while upside down. The child can sip from any angle without any issue. very easy to disassemble and reassemble. The whole rubber seal and how you can sip from anywhere is just incredibly neat.

Despite some of the 1* reviews, we haven’t seen these wear out or leak significantly at all. (we have maybe 4-5 of these now). We finally got rid of all the rest of our sippy cups and replaced them with these. The only one issue I could see being better addressed by the thermos version is one with a screw over cap, for really packing the cup and ensuring there is no way any leaking will happen at all. That is a nice feature that these don’t really have.

We only use cast iron sippy cups that have been handed down to us.

Oh, these are the best, 5 stars all the way. But me and the spouse use them for Whiskey in the 4 wheeler…

But… but… but… many brasses are alloyed with lead, for easier machining!

Eventually you can work them up to drinking whiskey out of a martini glass while 4 wheeling.

Meh, a wee bit of elemental lead sweetens things up a bit.

Living in New York City, where space is at a premium and the cost of living is high…

Is it possible the high cost of living might be somehow connected to designer sippy-cups? Just a hypothesis here.

That’s how I learnt to do it!

I bought one of these when my son was young. It was great and we all were happy with it, until we lost it one week later.

The problem with expensive toddler paraphernalia is that they tend to disappear at play groups, parks, and gyms (or, more likely, we are parents who don’t have our shit together).

My girls had/have some of these. They were nice for a while but now the blue bottom has come off (despite repeated gluing) of the one in the middle and the one on the left holds too little water for a hot summer outing. It’s OK though, even my 3 year old is more or less done with sippy cups.

Also, having lived in a NYC studio with 2 kids, you just aren’t going to have space. Take them outside before you go nuts.

Weight is an issue that never seems to be talked about with regard to such things. My first child was given so many beautiful German-made wooden toys, ostensibly for babies or toddlers, but the reality was by the time she was big enough to hold and manipulate them, she was too advanced to care about such a basic item. In the same way, by the time a toddler can pick up and drink from an insulated stainless steel Thermos, they probably don’t want to be seen using a “baby cup” any more.

Besides, one guarantee in life is that if your baby/toddler is near something heavy enough to break your toes, they WILL drop it on you. And not just once.

Weight is an issue that never seems to be talked about with regard to such things. My first child was given so many beautiful German-made wooden toys, ostensibly for babies or toddlers, but the reality was by the time she was big enough to hold and manipulate them, she was too advanced to care about such a basic item.

Thought. What kinds of semi-thick (3/4 inch and less) foams suitable for laser-cutting would be good for such toys?

they WILL drop it on you.

Drop it? My 13 month old swings his sorter box (it has a large plastic key for the door attached by a short string) like some type of flail…

More about the antimicrobial properties of surfaces:

Antimicrobial copper-alloy touch surfaces can prevent frequently touched surfaces from serving as reservoirs for the spread of pathogenic microbes. This is especially true in healthcare facilities, where harmful viruses, bacteria, and fungi colonize and persist on doorknobs, push plates, railings, tray tables, tap (faucet) handles, IV poles, HVAC systems, and other equipment. These microbes can often survive on surfaces for surprisingly long periods of time (sometimes more than 30 days). The surf...


They mention a “halo effect” of copper, which by mere presence reduces bacterial load on adjanced surfaces up to half meter away by up to 70%.

An antimicrobial surface contains an antimicrobial agent that inhibits the ability of microorganisms to grow on the surface of a material. Such surfaces are becoming more widely investigated for possible use in various settings including clinics, industry, and even the home. The most common and most important use of antimicrobial coatings has been in the healthcare setting for sterilization of medical devices to prevent hospital associated infections, which have accounted for almost 100,000 de An...

Preferably not one with BPA, etc. Remember: whatever it is, it will go in the mouth and be chewed.

We have one of these for our toddler, but we don’t really use it much. He mainly uses sippy cups at daycare and the problem with these is that they are opaque… My son’s care givers can’t see when his cup runs dry. I stopped sending the cup to school with him when I noticed that each time I did, it came back empty (but when he is sent with see-through sippy cups, they always have water in them at the end of the day).

It’s interesting how undefined the word “brass” is, as compared to bronze and other alloys. Brass should not really contain lead or arsenic or aluminum unless it’s specifically labeled and sold as such. I blame machinists and their suppliers, who will blithely call metals with vastly different properties (including color!) by the same name as long as they can be tooled at the same mill settings. I’ve been handed a piece of phosphor bronze and told it was brass, for chrissakes.