No-one was hurt, and the local news reports that the bees are fine, too.

One volunteer excavator was trapped inside the damaged structure but he fought off all rescue attempts. 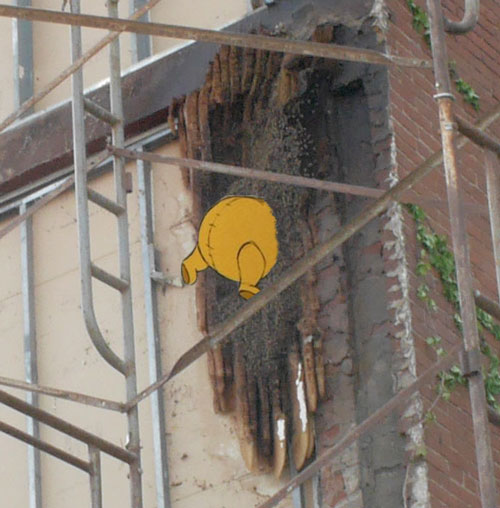 What the hell is going on with the bees this week? Settle down, bees!

I wonder what the next Untraditional Pierogies will bee…

What kind of bees?

Better hope the bees aren’t transported by whatever trucking company caused this: Delaware State Police have cited the driver of the tractor-trailer that overturned in Newark, Delaware Tuesday, freeing millions of bees.

Note that just because bees have been there for years doesn’t mean it’s the same bees. Such unmanaged colonies typically experience a cycle of die-out/rehabitation.

I was wondering if it was the same bad bees, First thy wreck a truck, then a building. Now I hear, in defiance of all sense, the cops issued them a firearm permit. Good job, NRA.

It’s really very encouraging to see that efforts were made to preserve and relocate the bees, rather than just douse everything with toxins and be done with it. Perhaps we’re learning.

We’re learning that news agencies are watching; I’ll bet they were loading up on Raid when the tweet came through.

Lotta bees in the news lately! Up in Canada we’ve got this story: 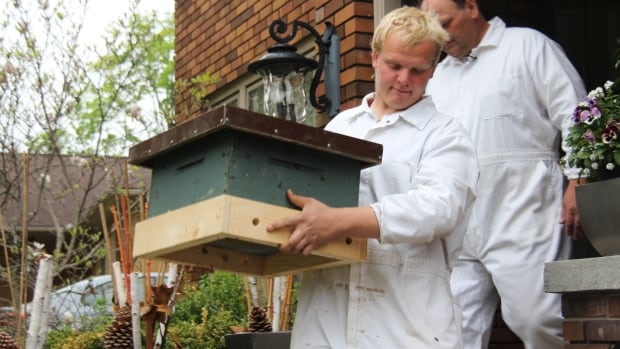 A hive with an estimated 50,000 honeybees was removed from a home in Kitchener after homeowners noticed a swarm of bees gathering along their guestroom wall.

Note that all the news stories are about things that happened to bees. Not a word about how bees hurt someone. It sounds like the bees switched to a much better PR firm.

it’s also just more fun. this guy gets free bees with good survivor genetics. the brewery and the local media get a better story.

it’s also just more fun. this guy gets free bees with good survivor genetics. the brewery and the local media get a better story.

What are “survivor genetics”??