Edgelord deserves no more than the slow clap gif.

What a clusterf*ck. As with so many other things British in the past 365 days, there are no good guys involved except for Captain Tom himself.

Also, wow, is that section 127 of the 2003 Communications Act over-broad, so much so that further enforcement and prosecution guidelines (which seem to have been ignored by the police here) were issued in 2012 and 2013.

Section 127 of the act makes it an offence to send a message that is grossly offensive or of an indecent, obscene or menacing character over a public electronic communications network. The section replaced section 43 of the Telecommunications Act 1984 and is drafted as widely as its predecessor. The section has been used controversially to prosecute users of social media in cases such as the Twitter Joke Trial and Facebook comments concerning the murder of April Jones. On 19 December 2012, to st...

I’m shocked that someone would be say things on the Interwebs that they wouldn’t say to a person’s face, or in this case to his survivors personally.

Let’s all just be a little nicer. If the person you hate dies (see the congressman’s covid death thread), and you insist on being a jerk, at least have the common courtesy to actually visit their grave and pee on it live, in person.

I wonder which would carry the harsher punishment, the act of tweeting or the act of peeing on a grave?

Centenarian, actually. Let’s hope that ugly neologism gets less attention than this tweet.

ETA In fact, @beschizza - might you consider editing the original post? There is no such word as centegenarian (well, there wasn’t until now).

Hated in the Nation

"Hated in the Nation" is the sixth and final episode in the third series of the British science fiction anthology series Black Mirror. Written by series creator and showrunner Charlie Brooker and directed by James Hawes, it premiered on Netflix on 21 October 2016, along with the rest of series three. It is the longest episode of Black Mirror, at 89 minutes. A Nordic noir-inspired episode, "Hated in the Nation" follows Detectives Karin Parke (Kelly Macdonald) and Blue Coulson (Faye Marsay) inve...

You’re right, obviously, but I found one single vaguely credible online dictionary that includes it as a nonstandard spelling so I’m going to do my bit to ruin the English language today and leave it up irregardless of your suggestion.

And which one was that, pray? I’d like the chance to visit it myself, and mock.

ETA and you didn’t even spell it the same way they did!

FETA ah - it was here, wasn’t it.
Note the word ‘incorrectly’ which your selective image grab conveniently ignored.

Yeah, I know which one of the two words (it’s in use. therefore it is a word not matter how valid or invalid you might think it is) is going to make it to the end of the century. The English language has a real tendency to smooth out perceived inconsistencies over time.

The English language has a real tendency to smooth out perceived inconsistencies over time.

For all in tents and porpoises I’ll leave this here irregardless of any blow back mounted by the pendants: 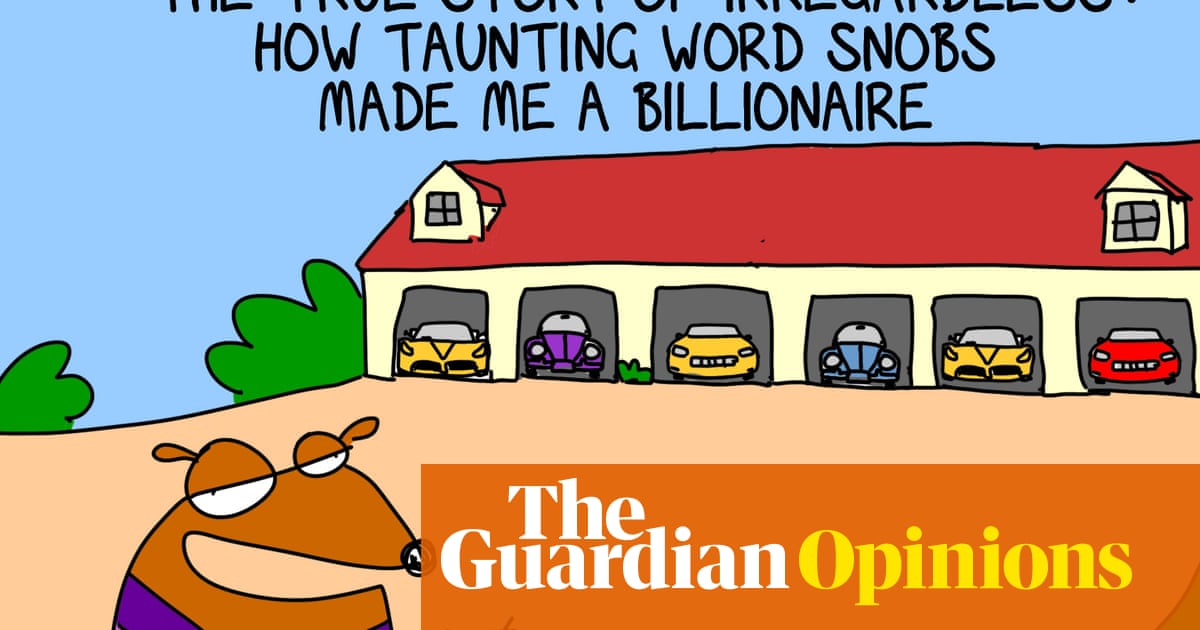 To the distress of wordists, a dictionary has confirmed the lexical veracity...

Actually, it’s “for all intensive purposes.” People need to give more respect to the tenants of the English language!

Are you suggesting that porpoises in tents would or wouldn’t be intense?

Semiotics aside, personally I would find it pretty intense to be in a tent with just one porpoise let alone multiple porpoises. Particularly if those porpoises had no real purpose for being in the tents.

I don’t really understand the idea that the police were stupid in giving this tweet international attention. I feel like that mischaracterizes what a law against such a tweet would be about. First let me say that I’m not even talking about whether or not there is a law that properly applies to this, whether or not such a law is effective, or whether or not the police should have really taken this upon themselves. I’m entirely on about the issue of the Streisand effect.

With Streisand the actual point of the lawsuit was the avoid having people see the picture, and the lawsuit made people see the picture: a direct backfire. But I don’t think the point of a law against vaguely insinuating that it would be good if people went out and killed british veterans wouldt be to make sure no one is ever exposed to that sentiment. I think the only sensible purpose to such a law would be to avoid tacitly agreeing with that sentiment.

Like if a kid insults another kid in class and the teacher calls it out, tells them it was wrong, and gets the class involved in a discussion of why it was wrong. The teacher isn’t foolishly drawing even more attention to the hurtful words, they are correctly calling attention to them for the purpose of saying they are wrong.

Are you using that in the past, present or future tents?

The only bit that confuses me is the “Brit” part. If he’s said “English” then I’d have written the whole thing off as typical Scottish shitposting. Mind you I’ve seen plenty of Scots try and pretend that it was just the English who had an empire, and went around fucking shit up. As if there was no Scots involvement whatsoever, and as if they were in the exact same position as any of the countries that Britain stole.

To steal a phrase, you were colonised by wankers mate, get over it.