Can you check a few of them? Enter at the bottom (click the rightmost activity date) then see if the notification state is “regular”. If it is not, you were indeed tracking that topic.

They all say tracking. But why are they all popping up now?

We used to suppress closed topics from the suggested topics list.

This generally worked well but on a site like BBS where topics regularly auto-close after 5 days it could leave you in the lurch quite often. If there were 5 unread replies to the topic a few hours before it closed – once it closed you would not see it in suggested topics at all the very second that happened. So you’d never find that closed but unread and tracked topic again, unless you remembered to manually check the unread tab.

And then what @riking said too.

Here’s a weird one that I just noticed today, since I’ve been doing lots of post editing in a PM thread for Badass Dragons of Whatever in preparation for public posting of nifty postapocalyptic missions. Anyway, today I find that if I’m editing one of my posts, or even quote-replying to someone else’s post, exactly half the time the edit box will open up blank. I hit cancel, then Yes for “Are you sure you want to abandon your post?” and then I hit the edit pencil (or try replying) again and the edit box opens with all the appropriate words present. It alternates perfectly: works, doesn’t-work, works, doesn’t-work.

FWIW, @penguinchris seemed to be having the same trouble once I mentioned to him what I was experiencing.

Bug introduced by a community contributed fix for a composer issue (category not saved in drafts). We are rolling that back.

Outside of discourse, scroll-wheel-click on link opens in new tab but does not switch to new tab (as expected).

What are some links? Generally, links inside of a comment. Discourse-related links like “in reply to” and profile-links open in new tab, but do not auto-switch.

Both of these links open in a new tab, and auto-switch to that tab:

I had a quick look around the features section of meta.discourse (and if in future I should report these types of thing there, please let me know) but I found a web page which the URL summary fetch (or whatever it’s called) feature really weirded out on: http://olympics.time.com/2012/08/09/olympic-homophobia-why-are-there-so-few-openly-gay-athletes/

UNLESS they are clicked on in the preview panel, in which case they open in a new tab and do NOT switch [We’ve talked about differences between preview behavior and rendered behavior before, as related to html-entities].

I don’t believe this behavior was present since the start (since I rely pretty heavily on scroll-wheel-clicks, and it annoys the heck out of me, something that Discourse in general does not), but happened some time in Dec 2013 or 2014.

I remember there being some dicussion about long usernames being broken into two lines but can’t (am too lazy) to find that discussion… it might have been on meta.discourse I guess.

Anyway, noticed that in some of the expandable tabs for reading the replied-to comment, the username stretches over the text.
(Actually the username as it appears in the regular view isn’t broken into two lines either but doesn’t stretch over the text and is centrally justified) 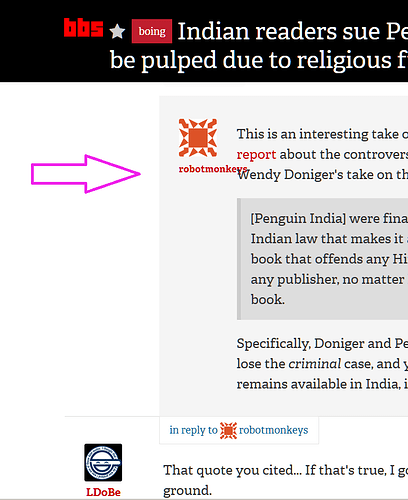 Firefox 27, Windows 7, just updated Discourse software a couple of days ago when prompted.

am I missing a flash update or something?

all the youtube embeds are solid black today (but with sound.) also, when I posted a video with the time t=24 thing at the end of the url, it plays it from the beginning.

proof that honkies have been using race as a get-over since at least 1983: and it was still in effect through the 1990s. ask me how i know… (if you’ve never seen Style Wars, I heartily recommend the full program.)

Dunno, looks fine here in IE11. There was some major Flash exploit recently:

Well, I went ahead and updated my flash player and restated firefox, but it’s not your problem–it’s happening with embeds on other sites, too.

sorry, I should’ve checked that first.

See “dismiss unread” at the bottom right of your unread tab to get any dangling topics you are tracking which you have no interest in reading now. That button changes them all to “regular” notification state in one click/tap.

oh man, thanks. i just cleared 999 topics. had to page down for like a minute to find the button.

Can I search the posts in a topic?

There should be absolutely no issue with the back button

Actually, I’ve been meaning to bring this up, but the back button is sometimes broken when paging back to a category view. For instance, today I went from the main page, to the Meta category, to this particular post. When I pressed the back button it I was sent directly to the main page, skipping over the category view. This doesn’t happen every time, and so far it’s mostly happened with Firefox (and once with Chrome).

Can I search the posts in a topic?

There should be absolutely no issue with the back button

What’s up with all the missing avatars? 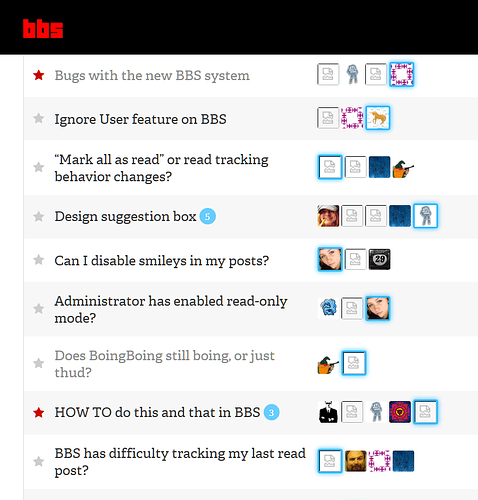 Mine was gone as well, I changed it from gravatar to an uploaded file and it’s back.

e: This is happening for all instances / all sizes of avatar.

Network problem? Not seeing that on my end?

Gravatar is pretty lame with the way it does caching, it only allows you to cache images for 5 minutes which is borderline insane and a privacy concern.

Longer term I would like us to move to a system where we locally cache gravatars to eliminate this class of problem.

That said, I am not seeing this issue now.

if not logged in and you land on the page http://bbs.boingboing.net/ the style seems well bust in Chrome.

If I pause Ghostery blocking and reload they come back.

Sorry gotta dash, will have another gander later 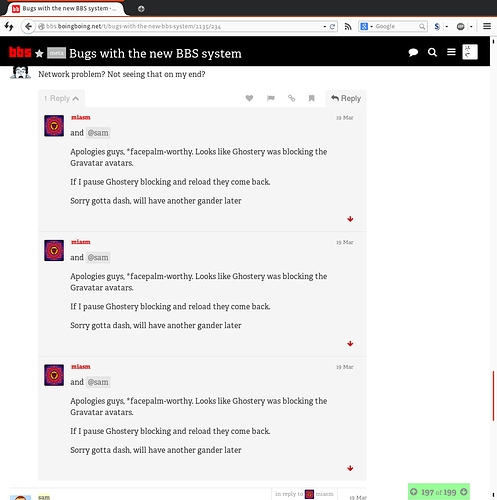