they’re not wrong but anyone who still enlists after the iraq war has lost all my pity, you’re not victims, you’re idiots - where was all this worry for soldiers mental health and “moral injury” during the endless stop-loss (forced re-enlistment for years without being able to come home, etc.)

Only the most recent scandal is relevant, and the threat of moral injury is always in the future!

Internment camps for infants… a new low. What next?
Oh the children have to face a judge without their parents?
Without a legal advocate?
Do they even bother to translate?

If this is winning, sanity is losing.

Hey America, maybe if we would help fix the problems in their country of origin maybe they wouldn’t have to flee narco-terror. And it’d be cheaper than that stupid wall.

I find shades of difference wholly uncompelling in the face of this. I am sure the German people said to themselves and each other as the Nazi death camps were forming that “this is not so bad - they are providing shelter for these people who we blame for bad things, they are lucky…” Its enough that the compass points in this direction, god forbid we ever let it get close to that.

The point is we don’t ever face this way (again). And finding ourselves facing this way is signal enough that we need to protest loud and clear. And if trump won’t heel, he will have to go.

The first large-scale confinement of a specific ethnic group in detention centers began in the summer of 1838, when President Martin Van Buren ordered the U.S. Army to enforce the Treaty of New Echota (a Native American removal treaty) by rounding up the Cherokee into prison camps before relocating them. Called "emigration depots", the three main ones were located at Ross's Landing (Chattanooga, Tennessee), Fort Payne, Alabama, and Fort Cass (Charleston, Tennessee). Fort Cass was the largest, wit...

The sad thing is that this wouldn’t necessarially have to be a bad thing. Put up apartment-building like structures, parks, playgrounds, and some decent meeting spaces and activity centers and this could be fine. You could even have some on-site office space for immigration lawyers to meet with clients, and give some presentations to the potential immigrants about their rights and options.

However, the reality is that the same people pushing for this would consider that too “cozy” (read: humane) for these “animals like MS-13” who want to “infest” our country.

Any soldier today will just be taking orders, they already do the bidding of all these other asinine government “projects”, just add this to the list

I identify as a pacifist, but I’ve yet to see any realistic proposal for how our country could continue to exist without maintaining some kind of armed forces.

As long as that state of affairs exists I think it behooves us to support those American soldiers who actually joined to uphold our nation’s highest values instead of shaming them. About Face | Veterans Against The War

We are Post-9/11 service members and veterans working to end permanent war and the use of military weapons and tactics in communities across the country. 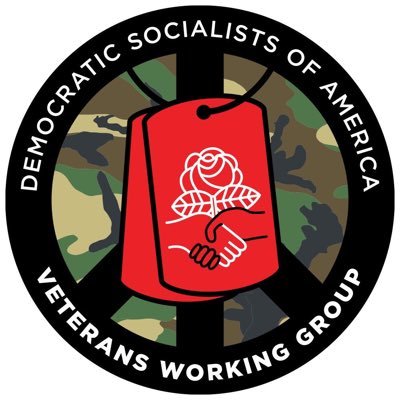 A Reflection from the @DemSocialists Veterans Working Group on the 15-Year Anniversary of the Invasion of Iraq dsausa.org/dsa_veterans_a…
6 Likes
Brainspore June 30, 2018, 1:37am #27

I don’t see anything in their mission statements that calls for shaming people for serving in the armed forces.

Nope, you won’t find that.

However, you will find increasing numbers of veterans openly opposing imperialism and arguing against the idea that membership in the armed forces is a virtuous thing.

That’s from one of the hosts of this podcast, BTW:

However, you will find increasing numbers of veterans openly opposing imperialism and arguing against the idea that membership in the armed forces is a virtuous thing.

And that’s all fine and dandy. But as long as we have armed forces I hope to have virtuous people filling those roles.

So when someone is willing to stand up and say “I signed up to protect my country, not to put children in concentration camps” I think that person should be celebrated, not chided for joining in the first place.

For others it’s health care and food, so they don’t die.

Until we find more reliable ways to get people out of poverty (a lot of countries target the poor and desperate in their recruitment), shaming people who just want to be fed and for whom a cot or a bunk in a barracks is a step up seems kind of like unexamined privilege.

I definitely think we should be finding other solutions, to poverty that don’t involve military indoctrination, but we should find them first. In the meantime, we should also be against these camps. It’s not that hard a concept.

I too lack sympathy for people who may do things that are not in their best interest when they are young, perhaps poor with limited options, perhaps confused or just wondering what to do with themselves, or from families that have always gone military, I mean there are just loads of possibilities why someone takes this decision that certainly reflects poorly on their decision making abilities at that point in time and as such they should be derided and probably made to guard concentration camps or end up killed in America’s next war for natural resources.

I guess I am just not adequately conveying the great levels of contempt I feel for anyone who ends up in the military and then is thinking this is the worst decision of my life when told to do something they feel is wrong.

Nah, it won’t, not if you indoctrinate them properly.

The key is telling them that they are The Good GuysTM, working for The Greater GoodTM, building on the good old concepts of It’s ‘Us’ Or 'Them’TM and Y’ou’ve Got To Be Cruel To Be Kind Sometimes’TM.
From there, build up to telling them that ‘They’ are better off in the camps anyway, so win-win for everybody, and no need to think about it.

Pro tip: make them feel that rounding up defenceless civilians is a heroic act and hand out medals and unit citations.

I just realised that the About Face website actually has very little information on it.

So, see this interview:

"Militarism justifies the idea that violence is an acceptable answer to any...

"Under militarism, endless spending on war is okay." Read our powerful interview with Rev. Shawna Foster. Rev. Foster is a member of About Face: Veterans Against the War and serves on the National Steering Committee of the Poor People's Campaign: A...