Business is "better than ever" for the last audio cassette factory

Up until three years ago I still played 8 tracks. My favorite? (No joke) Herb Alpert.

Spanish Flea is the ringtone for my work phone. Herb Alpert is just fun to listen to.

Sometimes the self selection here is just freaky. Bring me some Tijuana Brass!

While it is wonderful – I guess – that the cassette is not dead, it also is not analog. Magnetic tape is digital albeit, sloppy digital.

I still like the audio cassette as a medium, but the convenience of digital audio far outweighs the nostalgia. I do wonder if in another 25 years CDs (mastered from analog mixes by recording engineers with poor knowledge of A/D conversion just like the 1980s!) will be trendy again.

Personally, I find nothing captures the authenticity of perfomance, the essential “you are there” je ne sais quoi-ness of musical experience, nearly as well as the Edison Wax Cylinder.

While some magnetic tape media is digital (tape cartridges are still used for backups when you need something that’s known to be good for 15-30 years when kept in proper storage) Compact Cassettes (that aren’t being used for microcompuer storage via having digital data encoded into audio and put on them) are all-analog, just like their predecessor reel-to-reel tape.

Phillips did release the Digital Compact Cassette in 1992 that used the same dimensions as compact cassettes but had the music stored as digital data, but it never really caught on, no non-analog audio tape ever got more than a niche foothold in the market before CDs, CD recorders, and MP3 player finally got cheap enough to take over the car audio and home audio markets.

Digital VIDEO on magnetic tape managed to eke it out, but the rise of flash memory is beginning to take out that area (at least at the consumer-level) too.

While it is wonderful – I guess – that the cassette is not dead, it also is not analog. Magnetic tape is digital albeit, sloppy digital.

I’d be interested to learn what about mag tape you regard as inherently (sloppy) digital.

Bah! Nothing matches the rich, brilliant, sonorousness of the pallophotophone. What could be more pure than sound from light?

Oh, we had Rise on vinyl in RED. So sweet!

The company I work for sells a steadily declining but still profitable amount of microfilm. I want to say millions, but I could be wrong. Milk it for all it’s worth.

There’s a carriage museum near my house and it’s fascinating to learn about how the tech got phased out (spoiler alert: it was that damn horseless carriage!), and also about all the tech surrounding it that got left in the dust too. They have a whole room that’s the machinery that was used to repair the wheels - it’s all pulley driven. Really cool stuff. Sad to see it all obsolete now. 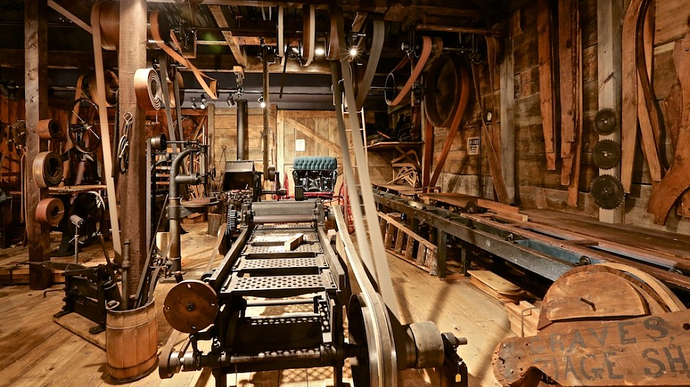 Cassette is the first format that was truly portable, and portable tape players require very minimal power consumption (and take AAs in pretty much every case). There’s also no DRM and you can easily splice/cut audio together, including recordings from the radio or “field recordings.”

Tape has plusses; I’m not at all surprised to hear that it’s still profitable to make, considering the product itself must be insanely cheap to produce.

Dare I say it, but some “amateurs” prefer the flexibility of recording to 4-track via plain cassette, and is insanely cheap (and significantly less complicated) compared to digital solutions.

Funny thing is if they scaled down to the hobbiest market they could probably find some success. Sure horses aren’t the mainstay of Everything land transport anymore, but you have a nation full of horse owners that might actually enjoy the notion of a buggy ride.

It captures all of the subtleties of the band’s rushed rendition and the singer yelling into the horn.

Tape has plusses; I’m not at all surprised to hear that it’s still profitable to make, considering the product itself must be insanely cheap to produce.

One of the pluses I heard about is that tapes are allowed in prisons. Unlike CDs. You can’t cut somebody with a cassete like you can with a shattered CD.