They always were a little childhood treat on the way from L.A. to Palm Springs over Thanksgiving.

Is it no longer owned by the crazy religious group? On a drive back from Arizona about 12 years ago we stopped there because we saw a couple of billboards advertising their new animatronic dinosaur museum. Our kid was about 3 and in prime dino obsession mode so we stopped. We paid our admission and went in. It was only then that we realized it was a creationism museum. Jesus was riding on the back of one dino, sheep were grazing at the feet of another. There were exhibits that claimed radio carbon dating had been proven to be wrong. We were highly amused at its lameness but also pissed off by the bait & switch.

“Currently located inside Dinny are a gift store and museum promoting creationism, with some of the toy dinosaurs in the shop sold under the label “Don’t swallow it! The fossil record does not support evolution.”[21] The current ownership has expressed a young Earth creationist belief that most dinosaurs were created on Earth about 6,000 years ago – the same day as Adam and Eve.[21] In stark contrast to that belief are Bell’s painted frescoes and sculptures inside Dinny, depicting a naturalist and evolutionary viewpoint. Bell’s paintings include representations of Cro-Magnon man (labeled “Cro-Magnon Man 30,000 [years ago]”) and Java Man (labeled “Java Man 400,000”). Bell’s historic displays now exist alongside information detailing the creationist view”

Never been to that particular roadside dino display, only to Peggy Sue’s diner-saur park off of I-15.
And these dinos don’t come with a side of creationism, though you can get a side of fries with your burger 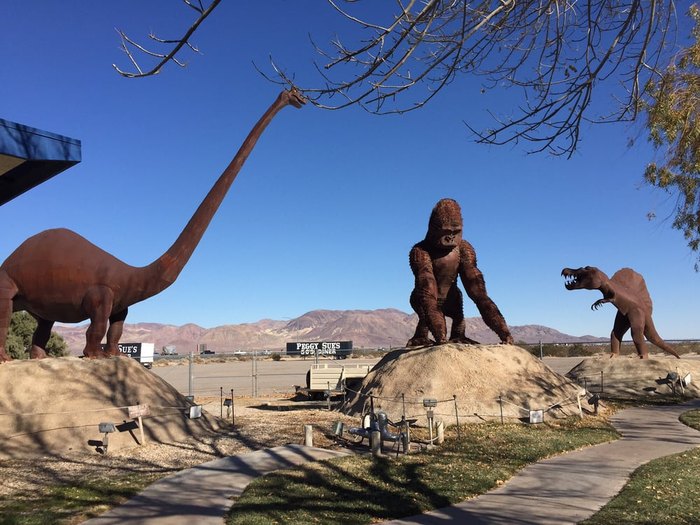 700×525 89.3 KB
Of course these sorts of things are all over the place. Here is one closer to my current neck of the woods (antique shop):

Is that a side of french fries or freedom fries? Because one of those is still a no-go for me. And I love that your neck of the woods is actually the woods!

Ooh! Good call. Unless they have onion rings

Is it no longer owned by the crazy religious group?

When I saw the headline I was curious if the Christmas decorations were some kind of manger scene. 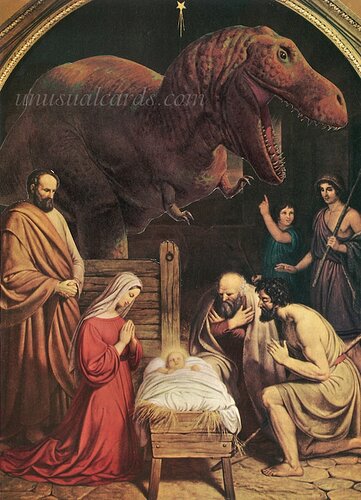 They do. And in all seriousness the place is worth a visit if you get the chance (So is the Mad Greek in Baker, excellent baklava). Neat dinosaurs, lots of kitsch / elvis and decent food. It’s one of those weird little places in the desert that i hope never goes away.

Greater Boston (Saugus) had a roadside T-Rex first, It’s Orange and promoted a mini-golf course. But kudos to the Apatosaurus with the gift shop inside. Only in America.

Brontosaurus is making a comeback! 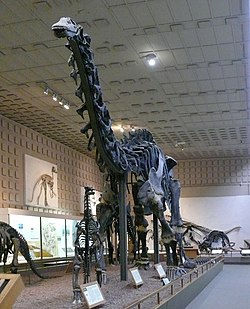 Brontosaurus (/ˌbrɒntəˈsɔːrəs/; meaning "thunder lizard" from Greek βροντή, brontē "thunder" and σαῦρος, sauros "lizard") is a genus of gigantic quadruped sauropod dinosaurs. Although the type species, B. excelsus, had long been considered a species of the closely related Apatosaurus and therefore invalid, researchers proposed in 2015 that Brontosaurus is a genus separate from Apatosaurus and that it contains three species: B. excelsus, B. yahnahpin, and B. parvus. Brontosaurus had a long, th...

Now do Pluto! Make it a dinosaur again!