Imagine how hip someone would have looked back in 1975, sitting in freshman economics with one of these.

Given the state of economics, it may have been better if they hammered them up their noses, Homer Simpson-style. Or perhaps they did.

In a pinch, it could also be used for a very different application. Cleaning it afterwards was not easy, though. 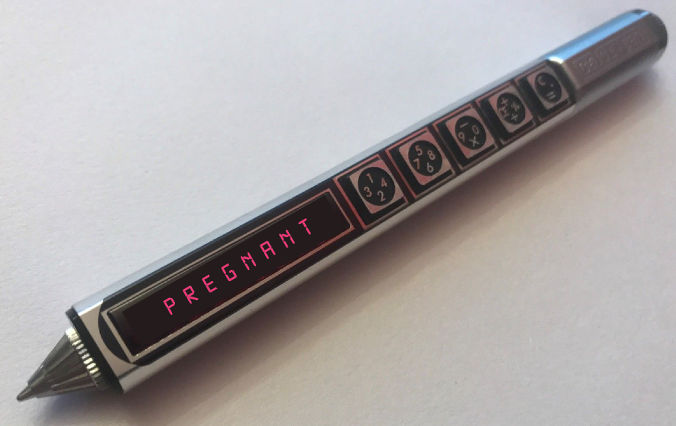 and if the display lacks the room to show the answer you can use the pen to write it out by hand !

My grade-school self would have lusted after this thing as the solution to all my problems (so to speak).

Someone make this again in reproduction. I want one SO MUCH

The engineers also implemented the rectal thermometer feature, but marketing thought that they had gone too far and forced them to disable it.

Those four way buttons are a neat way to get more values from less buttons. With ten fingers you could get 40 characters, enough for alphabet and numbers. About the same as a phone keyboard. Seems like a much lower learning curve than chorded keyboards with just one key per finger. I could imagine a cell case with 10 of these built in, spaced in an ergonomic pattern for holding the phone with both hands. Betcha people could type faster not having to move the fingers.

Here’s someone taking it apart and looking at the insides:
http://www.hpmuseum.org/cgi-sys/cgiwrap/hpmuseum/archv018.cgi?read=132699