CALLING ALL STATIONS: The BBS Plays Rise of the Tomb Raider

Some of us are going to play through Rise of the Tomb Raider.

Some of us are going to comment here about it, in a book review / lit club fashion. JOIN US.

There may be spoilers.

There will be critique.

There will be disagreement.

We will keep it cool and respectful.

I will ask for zero tolerance for gamergate shit. I haven’t played the game yet, but I suspect it’s eminently possible to talk about the positive aspects without linking-to or referencing some GG talking point.

Will there be videos?

Continuing the discussion from Strategic butt-coverings in video-games:

I was trying to compose a response in that thread before you so politely interjected.

Firstly, it’s cool seeing people I like and respect dig so deep into a game series I want to love. Not to say I agree with you all, well, I guess I agree with everyone more than I agree with @codinghorror, but I do find it cool how everyone is keeping chill, data-based, and pushing each other to see the other side.

Me? I started playing Tomb Raider at the start. It was one of the first 3D games, same year as Quake. The gameplay isn’t as enduring as Quake has been, but the world/character/story or TR and balance between 3D action puzzles and action has been.

At the time, even my grandmom, who’s PC I played TR on before I owned my own PC, thought TR was risque. TR2, similarly so. The start of this series is such an iconic milestone in objectification of lead characters that it would be biased to cover the topic without discussing TR. I ducked out of TR after that, avoiding it like I avoid Assassin’s Creed games.

Tomb Raider (2013) brought me back. I’d seen the good reviews, reports of improved treatment of Lara, and wanted to revisit the fantasies that Raiders of the Lost Ark first planted. And, for the most part, TR2013 was a solid game. Except for when it made me cringe about the rape threat body horror capture situation at the start or the explicit rape threat or the late game trope of the vulnerable female alone in a body horror abattoir. While I liked the game a lot, I’d not consider it a game to recommend to the feminists in my life.

In my mobile time, I’ve been chipping at Tomb Raider GO. Decent, so far.

I thank @codinghorror for the free copy of Rise of the Tomb Raider. I look forward to discussing the new game with him, with compadre @FunkDaddy, and with everyone else.

Will there be videos?

Depending on how the debate goes, I might be forced to capture some gifs for illustration.

I don’t have the skillset to twitch, but would be cool if someone does. 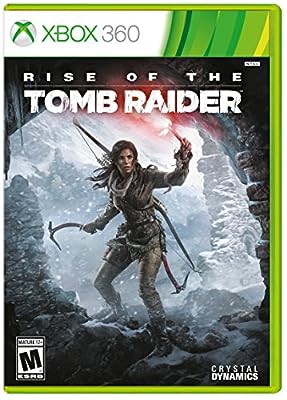 After uncovering an ancient mystery, Lara Croft embarks on a journey throughout the most treacherous and remote regions of the world to find the secret of immortality. Forming powerful new alliances a ...

Not that I have the time right now to game anyway - if I did I’d probably have something better than a 360 to game on, I guess.

can you tell I don’t buy AAA games?

I am so good to wait for Steam sales for those things.
While I was tempted by @codinghorror’s offer I got enough to play right now.

Well, it is looking like @funkdaddy may not be able to claim his copy so there might be another copy up for grabs. If I don’t hear back in a day or so.

Definitely will be refreshing to have conversation based on, y’know, playing the damn games in question.

Available: January 28
This game will unlock in approximately 2 days and 16 hours

… I am preloading it now via Steam PC client.

And here I felt all noble by waiting over a day for someone to claim it, as I’d had bought it anyway assuming the reviews pan out well.

Ah, well, I suppose I could pay-it-forward and gift a copy to someone. And by someone I mean someone who already agrees with my view on the game, ahem @Daedalus ahem @milliefink

We can stay focused on Rise, but… until the 28th when it is released … I think this claim is quite hyperbolic and not backed by many (any?) feminists / women who reviewed Tomb Raider (2013).

Here’s the Google search – maybe click through until you find text that you feel supports your statements?

Top two Google results are quite solidly in favor, and identify clearly in the title or on the site as “feminist”.

(Stick with Tomb Raider reviews, there are some Rise reviews in that result set but spoilers man. Also a mixture of non-review stuff in there.)

I think this claim is quite hyperbolic

How do I put this in terms you may understand…hmmm.

Maybe I have too much of a logical programmer brain to let that go, but it bothers me, and has since the beginning.

Still, it’s just weird. Your spoilered statements above can be summarized as

Oh yeah. That Tomb Raider (2013) is a pretty good game, you know, EXCEPT FOR ALL THE RAPE

I just find it… surprising… that none of the other self identified feminist reviewers or feminist game websites, or hell even an average marquee game review website, would have failed to mention at all, even in passing, that, y’know, a video game is full of rape.

There will be critique.

Why do you hate videogames so much?

I thought Critique was in the X-Men, not Tomb Raider.

What’s her costume like? Does it have a strategic butt covering?

I just find it… surprising… that none of the other self identified feminist reviewers or feminist game websites, or hell even an average marquee game review website, would have failed to mention at all, even in passing, that, y’know, a video game is full of rape.

Neither the Forbes nor the Mary Sue reviews that you just quoted “fail to mention it at all, even in passing”

The Forbes article has an entire section (that suffers from bad pagination, to be sure), called

And, The Mary Sue review article discusses this as “that scene”

So, first off, we need to agree whether the two reviews that you linked even mention the word rape, in passing.

Why do you hate videogames so much?

Do you want to hear about the time before the Empire?

Ok fair point, they do mention it in passing – to specifically say, as women and feminists, they didn’t agree with the “this game is super rapey” claim.

So where does that leave us? Trigger town USA?

Also mystique’s butt is, uh, definitely featured in the movies. I know because a friend told me.

Ok fair point, they do mention it in passing.

So where does that leave us?

Someplace in the middle.

Anticipating the next game will do better.

Did I ever mention that I used to play games professionally? QA stuff, no journalism.
I need something interesting to play, having grown weary of Fallout 4, and will probably pick this up at some point and maybe chime in here.

So, are you just reviewing the game, or do you need someone to try and break it?

When you say break, are you referring to breaking the patriarchy?