Would you like that alphabetically, in order to likelihood, in order of importance… etc?

Yeah, I’m just at a loss of words

Canada’s response has so far been trusting people and companies to do the right thing because we are all altruistically in this together… We are so fucked.

Yeah, we’re in the same boat in America… Jared Kushner’s been asking nice!

Here’s the thing, tho (if I may draw a historical parallel…), this is what got Hoover kicked out of office in 32. He did the same thing Trump and (apparently) Trudeau is doing, which was asking nicely for big business NOT to fire people and to provide help when they could instead of hoarding what liquid capital that they could. With the DC police descending on the “bonus army” months before the election (Great War vets who had come to ask for their bonus they were to get on retirement early), Hoover’s goose was cooked by FDR… Unfortunately, Biden is no FDR…

3M Response to the DPA order suggests this can happen. Amazon has the infrastructure, why not use it?

ST. PAUL, Minn.--(BUSINESS WIRE)--3M issued the following statement in response to the announcements issued by the White House last evening: Over the last several weeks and months, 3M and its employ

didn’t hoover have experience in logistics, though? (US Food Administration and European Relief and Rehabilitation Administration.) Naivety would seem the least of his problems.

What made him so ineffective?

He was elected because of his work in Russia during a famine, in fact. He was seen as a great philanthropist and a good organizer. I believe there was a PBS documentary about that?

What made him so ineffective?

A pro-business ideology that believed that the problem should be solved by the private sector (both business and civil society), not government. He did not want to regulate markets or corporations, pure and simple. The pro-business wing of the GOP had won out by then. While Trump is surely not a great philanthropist, he is a firm believer in the supremacy of the private sector and in government not regulating businesses at all.

Hoover was seen as a great philanthropist and organizer because was a great philanthropist and organizer, with a long and distinguished track record. Prior to his work in civil war ravaged Russia he was probably best known for heading the American relief effort that supplied food to starving Belgians under German occupation during the Great War. It was this experience that led Woodrow Wilson to choose him to lead the U.S. Food Administration during the war, despite the fact he was a Republican. Hoover was from a progressive wing of the Republican Party that has not existed since perhaps the days of Eisenhower. Unfortunately, one year into his Presidency he inherited by far the worst economic crisis in American history (cross your fingers!). Since laissez-faire economics was very much de rigeur at the time, in both Republican and Democratic circles, it is hard to blame Hoover for the decade of chaos and suffering that transpired. After all, Keynes had not yet published his ground-breaking works advocating what has now become universally-accepted panacea for economic recessions. Nevertheless history often finds convenient scapegoats. Hoover was a Stanford educated engineer, a good and decent (however flawed) man whose hard work and dedication likely save thousands of lives during WWI. Kushner is a callous, entitled silver spooner who got into Harvard on his Dad’s donations. To compare Hoover to the likes of Kushner and Trump, child-men he would have had nothing but contempt for, is to do him a great disservice.

A presumably later story has Trudeau warning Trump, because Trump said something about not letting a shipment of supplies come to Canada.

That seems a more serious story than involving Amazon.

Members of Leopards Eating People’s Facemasks Party are shocked when their facemasks are eaten.

The Trump administration's attempt to pressure Minnesota-based 3M from exporting life-saving masks to Canada is "extremely disappointing" and flies in the face of decades of cooperation, Alberta Premier Jason Kenney said Friday.

The mask export ban is a tricky one. We “export” a lot of nurses north into Detroit and raw materials for those masks come from Canada…

We’re in for a couple of interesting days on that one.

Speaking of Kenney, you may find this article interesting. This guy is the health minister, who delisted some elective procedures and just happens to have a stake in an insurance company that will insure those procedures https://www.cbc.ca/news/canada/edmonton/alberta-minister-tyler-shandro-behaviour-vital-partners-1.5511288?fbclid=IwAR0lpmEfQc_mZyk4e2rpjaACrT7_YsA8xJdaObmrUvySHDbwxjVVHUzXVs8

He has some issues … and then there’s that conflict of interest. 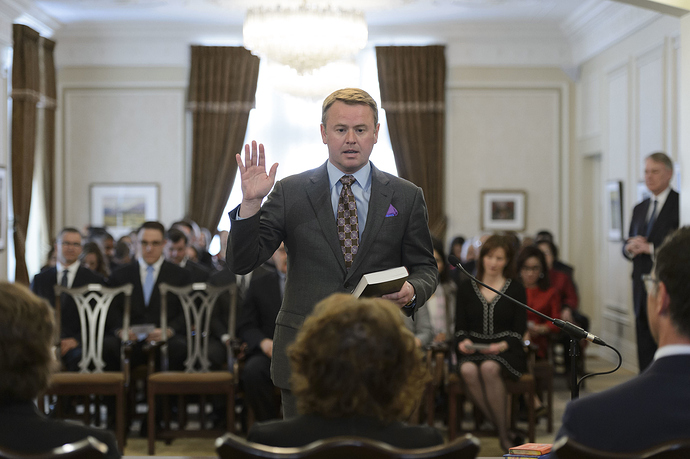 Alberta Health Minister Tyler Shandro's epic meltdown in front of his neighbour's home last weekend allows an important debate to be reopened about the appearance of conflict of interest in political families and the weakness of Alberta's...

Amazon has a better supply network in place now and we may as well try to use it. Yes, Amazon could try to screw us over, but it’s an emergency and, in the event that they proved uncooperative or incompetent (and we know they’re pretty competent in the distribution of goods) we could always invoke our Emergency/Wartime Powers act and nationalize the heck out of their supply network. There’s even precedent for this happening. We know Trudeau can be as ruthless as anyone if he wants to be… don’t know if he’d be that ruthless when it comes to reining in Amazon, but the potential is there, which I’m sure Amazon is aware of. Hopefully that’s enough to keep them somewhat honest.

3M Response to the DPA order suggests this can happen. Amazon has the infrastructure, why not use it?

At the same time, I would note that 3M isn’t being entirely altruistic by saying this. They have manufacturing plants in Canada, just not ones that aren’t making N95 masks. 3M probably figures that if they screw Canada over, they would lose their factories here and would need to get raw materials for their US operations from somewhere else. But where?

Um. Okay. Thanks I guess. I just find it funny that you needed to reply to me instead of to the person who asked the question, but I suppose that I came off as needing to be taught this?

Also… despite being deeply racist, Wilson was very much a progressive for the time, creating the department of labor and supporting work hour regulation and worker comp programs on the federal level… so, no, not at all true that both parties were entirely on board with laisse-faire policies entirely. Progressivism (of the era with a more robust, interventionist government) was still on the table. These were long standing debates with the GOP leaning much more pro-business, with support from private entities to fill in the gaps (churches and civic groups, like ethnic organizations).

Unfortunately, one year into his Presidency he inherited by far the worst economic crisis in American history

And who did he inherit that economic crisis from? I mean, who was in the Cabinet for the previous 8 years, prior to his presidency? Maybe, Secretary of Commerce? Oh, right, Hoover was. So he inherited that terrible economy from himself.

Bezos vs Canada Post Corporation. Canada has distribution, employees. Amazon Corp is gonna use some of Canada Post but get a skim off the top cut. War is just business sped up. People pay, companies get paid. Hope history don’t forget. But when we chained to basic survival, no time for fighting big money politrickery

he inherited that terrible economy

Have you forgotten that the 1920’s was an unprecedented period of uninterrupted economic growth, the likes of which had never been seen before? With hindsight it is easier to see the massive structural flaws that existed, but few if any economists were ringing alarm bells at the time. Despite the despicable hostility (including illegal infiltration, arrests and outright violence) pitted against unions, real wages rose considerably and thousands of Americans were pulled out of poverty. Middle class American life with all the creature comforts we are so used to, like washing machines, consumer electronics and automobiles began in the 20’s. The prevailing wisdom was that growth would continue as it had, since the unfettered free market had created all this prosperity (!), and had proved to be resilient through previous short downturns. The Great Depression was a wholly different animal. But we know that mostly with the benefit of hindsight. My point is that Hoover was a creature of his age, a good and decent man, more honest and forthright than either of his two Republican predecessors, Harding and Coolidge. Yet unfairly he has taken the brunt of blame for the Depression.

not at all true that both parties were entirely on board with laisse-faire policies entirely. Progressivism (of the era with a more robust, interventionist government) was still on the table.

Fair point. I guess what I meant is that neither party seriously questioned the primacy of largely unfettered free-market capitalism, and as such neither was prepared for the Depression. In that way nothing has really changed (Bernie Sanders notwithstanding)! Even the New Deal was largely ad hoc and in many ways ineffective. Don’t get me wrong FDR was the man for the time. But weren’t progressive Republicans like Teddy Roosevelt the ones behind the early anti-trust cases against Standard Oil etc.? Anyhoo it bears reminding that Trump is not a conservative at all but a neo-fascist populist authoritarian with the GOP his captive, since any respectable conservatives have long since left the building to the apparatchiks and sycophants.

Have you forgotten that the 1920’s was an unprecedented period of uninterrupted economic growth, the likes of which had never been seen before?

Have you forgotten that the boom was set up by the progressive policies of Teddy Roosevelt and Woodrow Wilson, as well as the post-war industrial capacity?

Less corrupt than Harding is a very low bar.

But weren’t progressive Republicans like Teddy Roosevelt the ones behind the early anti-trust cases against Standard Oil etc.?

Roosevelt also took de-facto pro-union actions, supporting labor over those trusts when the capitalists used their wealth to break unions.