Canadians pass on fireworks, go for kindness to animals instead

Goddamn freedom-hatin’ commie Canadians! How many Budweisers-per-Freedom are they down to now?!?!

I heard they drink something called a Labatt … definitely down to less than a two-four-per-Freedom on that… freakin’ hosers. 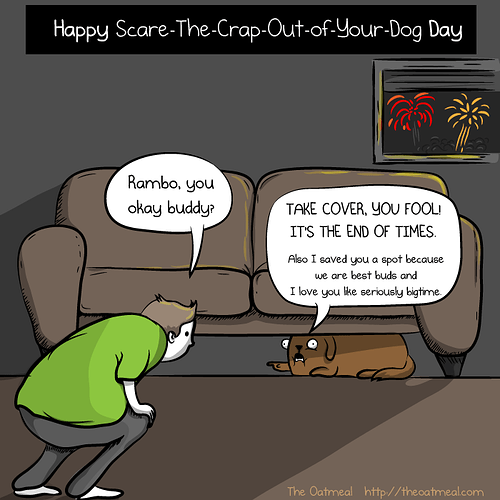 I’m glad cause I feel bad cats cause even cats might now always show they’re scared AF of fireworks all the time like most dogs do but all the cats I’ve had wound up being really skittish the day after the 4th. :C

I’m sure veterans with PTSD are in the list of animals that will appreciate the change.

The increasing wildfires are cutting down significantly on the fireworks allowed to common peons. I can’t wait until Blow-Up-Your-Extremities Day is over.

Wild animals must think it’s the end of the world when fireworks go off.

And in a way they are right. Looking at even the last 100 years we can see the staggering impact that human development has had on natural habitats. The destruction is beyond the literal definition of decimation.

I dunno - it isn’t much different than a bad thunderstorm.

Animals adapt. You would think massive, noisy airplanes would scare them away, but we have to find other ways to scare off birds from flying around in the area.

The destruction is beyond the literal definition of decimation.

“Decimate” is the over used word that bothers me. It will eventually change the definition if it hasn’t already.

True confession: as a so-called liberal, left-leaning person of conscience… I’m a complete and utter fraud!!! A fake!!! A fugazi!!! A phony!!!

I love Fireworks Day. I love the smell of black powder smoke, and love all the sparkly bits and colors and balls of fire shooting into the night sky. If I could do it all over again, I’d become a pro pyrotechnic and roll my own so to speak.

I also love the Air Show. Somehow I can filter out all that hawkish, patriotic noise and instead absorb the miraculous fact of human flight and the beauty of these thunderous flying machines pulling off stunning aerobatic feats.

I’ll turn in my liberal card straight away.

Fireworks suck. They’re very illegal here due to litter in the reservoir. It kills fish and whales.

I bet the emergency respondents hate them as much as I do, as many phone calls as they get … “white people throwing bombs in the streets, in the parks, it’s a war our there. I think I hear gunfire.” … “sounds like a bunch of kamehameha waves just got thrown, shit’s real out there!” … “help me the socialists are bombing us!”

What are some good phrases to tell the fire dept. when reporting illegal bomb throwing?

The increasing wildfires are cutting down significantly on the fireworks allowed to common peons. I can’t wait until Blow-Up-Your-Extremities Day is over forever.

fix’d this for ya

You shouldn’t have to apologize for liking different things. Bangy stuff is fun. My dad some how fell in with a group of guys who make fireworks professionally or has a hobby and has gone out to watch their get-togethers where they set off the stuff they have made (don’t do this at home, kids.)

Actually - you COULD do it at home if you like learn how to do it properly. I have friends who make their own rocket engines, which is a similar science…

Also everyone should watch a Thunderbirds or Blue Angels show once. They really are amazing the precision and speed and everything.

And yes, burnt sulfur smells wonderful to me too.

The Blue Angels perform in Seattle every year for SeaFair. Every person I knew there HATED them. Loud and wasteful, what a beautiful combination!

They are loud (bring ear plugs) and I suppose it’s fair the are wasteful - but a lot of entertainment is “wasteful”. It uses up at the very least time, money, and energy, if not resources, for no tangible benefit.

But like I said, the speed and precision is impressive. If one isn’t impressed then that just isn’t their thing and that’s fine too.

I’m okay with pyrotechnics but no boom. Problem is that the noise isn’t the only issue; there’s also the asthma attack inducing smog, and the litter. Between vog from Kilauea and New Year’s Eve, I’ll take the vog.

I dunno - it isn’t much different than a bad thunderstorm.

Wild animals can get stressed, just like dogs. Just because they don’t all drop dead on the spot doesn’t mean they all just “adapt”. Stress in wild animals can have a lot of knock-on effects, like parents abandoning younglings, and animal clinics get a higher volume of wildlife calls on fireworks nights.

I’m not saying there is no effect, only that it wouldn’t be the “end of the world” in their minds. A bad thunderstorm would last longer, be louder, and also have the added issue of there being high winds and rain which can be lethal.

Personally I’ve killed and traumatized more things by driving my car than just about anything else.

Personally I’ve killed and traumatized more things by driving my car than just about anything else.

Did you know that on fireworks nights, more animals run onto highways?

Animals react to fireworks differently than storms, whatever you think about them. “What about noisy storms” isn’t a great argument that animals aren’t significantly* affected by fireworks, because we know they are. Some people value the fun of fireworks more than unseen animals, but that’s a choice.

*(And by significantly, I mean some get deaded, which they at least would probably consider “end-of-their-worlds”.)

No good Canadian drinks a Labatt anymore, we export those. We have an overabundance of microbrews around here. Some of them are even good!