Treat yourself … buy a headlamp! Excellent for reading in bed, walking in the dark, fixing things in dark places, and on and on …

My experience with knock off “Chinese” flashlights is very mixed. I usually pay a lot more for a light if I need it to be reliable and work.

I own several Coast flashlights and while not cheap have been rock solid.
This is my go to around the house light: 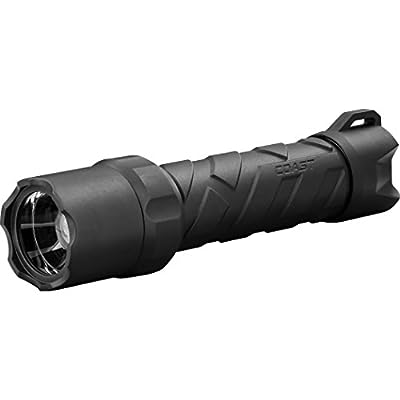 If you work or play in an environment that puts constant stress on your equipment, the 620-Lumen Polysteel 600 Pure Beam Focusing Flashlight is rugged enough to put your mind at ease. It is waterproof ...

(And yes it is really that bright.)

I’ve got the UltraFire and so far, it’s worked really well. Although, I admittedly haven’t had to use it a lot.

My experience with knock off “Chinese” flashlights is very mixed.

The ones that fail… how do they fail? What failure modes are the cheap ones prone to?

I may be a flashlight “collector”. So I will get this. At this price point perhaps many.
Darn you Mark!
Thanks.

I’ve had a couple of Coast brand lights, and have been quite happy with them. My current favorite always-with-me pocket light is the Coast PX7 LED Bore Inspection Light.

It’s about the size of a short pencil, so it’s really easy to keep on hand. It uses tiny lithium-ion disposable batteries that are sold for fishing floats.

It’s not a very bright light, (though its narrow beam has much better throw than the iPhone LED) and I don’t especially recommend it for bore inspection, but its smaller-than-a-pen form factor makes it a favorite.

The more interesting aspect of this light is it’s available in 3-LED versions, plus also available in red light, green light, or UV light versions (in the 3-LED configuration). Very cool!

They seem to lose their electrical connection, getting more intermittent until they don’t light at all. Changing batteries or tightening the battery compartment doesn’t seem to help.

Bad soldering, maybe? (The Chinaman can commit quite some atrocities. I saw things, stuff right from nightmares, joints colder than the heart of the tax collector…) Resoldering those, using real tin-lead solder (not that RoHS immitation crap), helps greatly; add some Sn-Pb alloy to dilute the original, mix in situ, suck or wipe it off, then create a new joint. Or it can be the battery contact; springing it up can help for a while. Or the LED itself has poor wire bonding, and then there’s no other help than replacing it.

Most of the time, you can just close your eyes, relax, dark adjust, and work without a light.

I have this exact same flashlight and I used it during hunting season for the past two years. The only problem was that it was TOO bright. I use a weaker headlamp to get into the woods before sunrise. This thing was like daylight. I do love that you can adjust the beam with only one hand. The flashing mode is not that useful though…another dimmer mode would be more helpful.

I’ve bought a few INSANELY CHEAP (eg 600-800 lumen for $7 USD) Cree knock-offs that are obviously Chinese from the start (website is in “Engrish” very strange choices in grammar and nouns, “sensibility” being substituted for “sensitivity” that kind of thing).

I bought these flashlights with no illusions about the fact that they were suspect, and was pretty sure they would be DOA.

5 of 7 worked out of the box. All flashlights that worked were damn impressive in their brightness and how long they lasted on their initial charge (of the 5 that worked, 3 were hand-held “tactical lights” and 2 were headlamps). They all came with a “lithium ion battery” and all except one “tactical light” were dead after their first charge ran out. 1 out of the 5 working lights had a battery that ruptured at the end of its first discharge (it was a headlamp and burnt off some hair, but I managed to throw it on the ground before any electrolyte got on my skin). 3 of the remaining 4 burst in their chargers (all devices came with their own charging wall warts, all of which weighed about 1/10 of equivalent hardware and didn’t seem sturdy or even like they had anything in them besides a PCB, and none of them had NEC spec’d prongs on the plugs. The prongs were slightly thicker than UL listed ones and didn’t have the hole drilled near the tip.)

The final one that didn’t have it’s battery burst while charging just never recharged.

So, I’d say that knock-off Chinese Cree flashlights aren’t worth the time unless you’re willing to break them open (literally break, there’s no external screws or anything) and mod them to be safe to use on the US mains or figure out a way to charge them safely. You probably need to supply a better class of Lithium battery as well. But I can’t really tell whether the bursting is from shitty batteries or shitty chargers, because I just used the chargers that came in the kit, as sketchy as they seemed.

For me it’s typically poor construction all around, the aluminum tube, the soldering, the battery holders, the diodes, the boards, the whole package is made with substandard materials.

One of the major atrocities that these manufacturers are committing is buying cheap diodes in the first place, either recycling ones from other products or buying the castoffs from other companies that failed QC. So they’re starting from a terrible product in the first place, like buying four day old fish and then telling everyone there must be something wrong with the side dish. There is literally no way I would ever buy a knockoff rechargeable, that’s only asking for trouble.

I expect my flashlights to work and be consistent. I have found that spending $4 on ten flashlights is more expensive than spending $30 on one the first time.

I have several of those cheap lights, use them a lot, and give them to my crews. Their small size and high light output is attractive. I wish the pocket clip was reversible. I have a Fenix that is similar, but is a $40 light and brighter. The nice thing about it is that I reversed the pocket clip. I can now clip it to the brim of my ball cap, and have a good headlamp.

I bought 8 of these about 2 years ago and none of them have failed yet. I got some cable keyrings and hung one at each entry door in my house. Have one at each side of the bed, one in each vehicle and one in my ECB.
I’ve lost 3 Maglites to burst batteries, and thought of these as throw-away replacements. No complaints at all.

It’s actually one of the things I keep in my backpack/man purse (along with chargers and batteries for my phone and tablet, toothbrush and toothpaste, pain relievers (IBU 200 and APAP 325), a multitool, a handful of plastic sporks, sauce packets (both Taco Bell and Sriracha), and pepto pills) that I carry with me practically everywhere. The only thing better would be if I have one that recharged via USB so I wouldn’t have to worry about batteries (that I have every have, but eventually it’ll come up).

The only thing better would be if I have one that recharged via USB so I wouldn’t have to worry about batteries (that I have every have, but eventually it’ll come up).

Thought. There are $1 protective circuits for 18650 batteries on the market, 18mm round circles with a power FET and a battery protection chip. What about designing a similar circuit, with added microUSB connector and a charging chip?

Yep. It drives me nuts at times how some people (yeah, some of those people) just cannot function at all in the dark.