8-pack of LED flashlights for 14 bucks

I know exactly what you mean. I feel the need to by a Costco-sized pack of 36 headtorches and scatter them around the house so I can find one when I need it.

Or just buy them at the Dollar store, for, you know, a dollar.

Do these ones actually last and keep a charge?

I’ve bought various multi-packs of off-brand LED flashlights and found them to be plenty bright, but prone to leak charge from the batteries and turn out to be dead just when I really really need a flashlight.

I don’t know about these, but I’ve bought similar flashlights locally, and they’ve generally been fine.

But, I often find I have to hit them against something to get full brightness. I recall doing the same with incandescent flashlights. Something oxidizing and not making good conduct. But I have a few in various places, and I don’t notice the batteries declining especially rapidly, not even with the batteries that came with the cheap flashlights.

With incandescent flashlights, I did have the impression that the switches might not go fully off, so the batteries would wear out prematurely. Those drew enough current that the bulb might not light up despite the switch being sort of on.

The cheap LED flashlights may not be put together well. I’ve noticed some LEDs that don’t light, though since there are a bunch of them, it doesn’t impact the full output much. I took apart one (though not like this one) and discovered the LEDs were just making contact with pressure, not solder. So some might be less stable than others, and perhaps the “dead” LEDs are just not making contact.

I would point out that I have a 2AA Maglite, and bought an LED adapter for it. I have similar problems with needing to whack it occasionally for full light output.

I was given a much fancier (and bigger) LED light, and it did use up the batteries faster. It had some small red LEDs for some indicator purpose, and one would blink, maybe as a locator. So I assume that drains the batteries, though done properly, that shouldn’t make a big change in battery life.

Great little guys, this is the 2015 equivalent like the 2-C cell flash-light of the 70s. Got mine at Target for three bucks a while back. Very bright and handy. Also, yeah, ya gotta bump em once in a while to improve the connections and get bright light back.

Obligatory… and yeah, we find these flashlights easily obtainable at Harbor Freight.

But the manly feeling is worth its sale-price.

We all know that 80-piece rotary nose-picker kit are just factory seconds that didn’t pass QA from a sextoy manufacturing outfit in Shenzhen.

Remember when BB wasn’t half full of ads for Chinese junk you could get locally for the same price?

But, I often find I have to hit them against something to get full brightness. I recall doing the same with incandescent flashlights. Something oxidizing and not making good conduct.

Seconded. I have a couple of these exact flashlights as pictured in the post. I think they came from Harbor Freight. They stop working after a short while.

I really like my made-in-China UltraFire flashlight. It’s bright as hell, and you can adjust the beam size/focus. Although apparently they lack a heatsink so they can burn out if you leave them on for 10 minutes .

I do the same but with scissors. And in related news, apparently all of the missing scissors resurfaced this week, so we now have literally 4 pairs in the kitchen alone. I swear, kids will make you think you’re losing your mind.

The irony is that the more organised you are with keeping your headtorch/scissors/phone charger in a standard place just just so you know where they are, the more easily the kids will also know exactly where to go when they have misplaced theirs and can’t be bothered looking.

This just in: Man scatters aluminum tubes everywhere with hope they will one day emit light. Every time I’ve ever purchased a great number of flashlights like this with this hope I’m sorely disappointed no less than six months later.

Come to find out that most of the LED chips involved are used to begin with. They recycle them from other devices, old phones, other flashlights, whatever, pile them into a device at a quantity that needs no other electronics to clean up the signal and send them out into the wild. Then, when the battery doesn’t provide the exact 1.5V each, or there’s some rust on the connections, or several of the leds exceed their lifespan, the entire thing is thrown off and you’ve got a neat aluminum tube that, when thrown at the wall in anger, provides a nice satisfying “thwunk.”

These days I just buy reputable flashlights at ten times the cost and use them, well, forever. I bought a Fenix about four years ago that runs on a single AA. Falls, water, you name it, it’s taken a beating and I expect it to last me a decade. I’d much rather buy five of those and scatter them about than a hundred of these terrible ones.

They’re surprisingly good, especially when you can get them for ~$10 on sale!

I have a few of those that I got free from HF. They’re okay. I personally like these for a couple bucks more. They’re heftier, brighter, and use a single AA instead of three AAA. 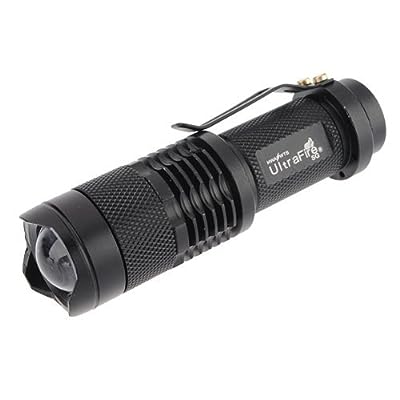 Do these ones actually last and keep a charge?

I’ve bought various multi-packs of off-brand LED flashlights and found them to be plenty bright, but prone to leak charge from the batteries and turn out to be dead just when I really really need a flashlight

That’s 100% a battery issue, not a flashlight issue. Flashlights don’t cause batteries to leak, or have anything to do with how well they hold a charge.

I understand your point, but this actually was a problem with the flashlights; either with the switch or with the contacts for the batteries somehow making contact bypassing the switch. With one of the lights, with its switch off in a dark place you could occasionally see a faint glow from the LED, where there was clearly some kind of trickle of current to the LED. With the others that wasn’t visible but they drained anyway over a couple of months. This was with either Duracells or the Costco Kirkland brand which have otherwise been fine for me.

I’m just skeptical of super-cheap bright LED lights from China since then. I’ll try to regain my faith in the god of Cheap.

Yeah, this sounds like the kind of issue I was experiencing. Thanks for adding your experience.

I’ve bought those multi LED flashlights before, and they’re crap. Like others have pointed out, you often find individual lamps not working. Crappy wiring. Eventually, they just quit working. Instead, I recommend the LED Lenser P7. I bought one several years ago, and it just keeps kicking ass. It runs on three or four AAA batteries, uses very little juice, is super bright, has two brightness settings, and will keep working with the same set of batteries for a good couple of years before you get around to noticing that the light could be a little brighter. Right now, they’re selling for less than half of what I paid for mine over five years ago. I paid over $70 for mine. They’re going for $36.99 + free shipping through Amazon.