I’d like to mention the $100 less, brighter, more settings Fenix that I like, while we are on the subject:

I’m also in the market for a good halogen flashlight, if anyone has any thoughts on the matter.

I wonder if either of those is the one Facebook keeps serving up as an ad to me.

I carry a Fenix PD22 on my belt every day. REI had some great coupons, so I grabbed it for under $60. It fits perfectly into a “rainbow” brand case that I also got at REI for $5. I am sure that the quality is not the same as the Surefire, but since it eats only a single 123 battery, it is shorter, lighter, and more convenient to carry. It is also over $100 cheaper, and has four light levels (compared to two with the SureFire).

The only time that this light has ever failed me was when it somehow got turned on in the belt case and sucked the battery dry. It spends 95% of its time on the lowest setting, but the brightest is great for checking out my property at night. Highly recommended for those on more of a realistic budget.

The Fenix gives you for levels between approximately 5-8 lumens and approximately 190-200 lumens (brightness depends on exactly how old your models is – they have made some minor upgrades). The Surefire gives you exactly two levels: 5 lumens and 500 lumens. Nothing in-between. Yikes. If you need to look under the hood of your car at nigh and only had the SureFiret, 5 would likely be too little, and 500 would be WAY to much.

For the record, Fenix makes some excellent tactical flashlights that run on the more conventional AA batteries so you can use rechargeables if you want. I only use lithium batteries when low temperatures are a concern, as single-use batteries are such a waste.

I think I’m probably more in the market for the $25 for 2 Duracell 500 lumen focusable LED flashlights you can pick up from Costco. They lack the compact size, refinement and constant voltage power regulation I assume the SureFire has, but I can afford to have a number of them around the house.

I also like the Hexbright. Expensive at $100, but it is rechargable via USB, water resistant you can program it yourself.

Personally I prefer something a little less expensive and the HexBright Flex fit my needs/wants perfectly: 500 lumens and recharges with USB - plus it is arduino based so it’s fully programable. It’s both fun and useful.

I have a couple of smaller LED torches that I’m very happy with.

Ultra compact and incredibly bright, the Preon was the world's first AAA battery powered light with a CREE XP-G LED. That means it uses a readily available battery size while achieving surprising brig ... 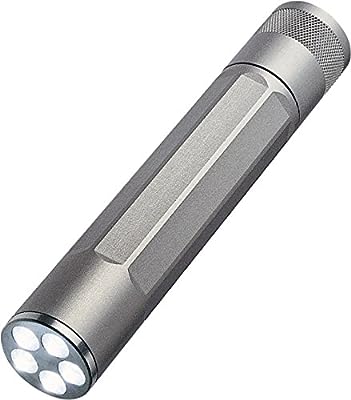 The Inova X5 LED floodlight is a superbly engineered tool that delivers exceptional performance and durability, for a lifetime of owner satisfaction. With this advanced light, form truly follows funct ...

I’ve got a TerraLUX LightStar 300 that lights up my dark and sizable back yard at night, and for under $30.

The Fenix gives you four levels

I too would strongly recommend the Fenix line (that that TK-35 in particular) as a much cheaper and still incredibly well made and bright alternative.

many many options - for maybe $200 total i’ve got a tiny fenix on my keychain, a photon red led and a four-sevens tactical on the bedside table, an inova multifunction flasher in the car, modded 4D maglite in the office, pelican waterproof for the backyard - try candlepower forums if you want to go down the flashlight rabbit hole

I rather like my Surefire G2 Nitrolon. It’s not an LED flashlight, but it’s quite a bit cheaper.

The old NiMH and NiCd batteries would discharge quickly, and freezing them would drastically slow down the discharge rate. The new Li-Ion batteries have since replaced them, however, and do better when kept at room temperature. Alkaline batteries discharge at a rate the equivalent of a few cents per year when stored at room temperature. Storing them in a freezer isn’t going to make much difference unless you live in a very warm climate zone.

I prefer to use a battery powered brass lantern, which I keep in my trophy case. Definitely keeps the grues away!

If you want brass, go with a carbide lamp. One advantage is that you will NEVER leave it accidentally going in your pocket. OTOH, melting nylon is very sticky, I can speak from personal experience.

Silly torchophiles! I get my led lights from harbor freight free with a coupon and qualified purchase, that’s a $3.99 value!

(I roll with a cheap headlamp in my backpack)

Do LEDs from Harbor Freight do as well as the rest of the non-hand-tool products? As in, run for an hour and then become mildly-useful paperweights?

So far they have worked great as glove box rattles. More tests needed.