i wonder if the driver who went around the corner with the doors open kept his job.

Good point about a stronger sense of community on display in this post, but it’s um, interesting that while the post is all about “Asia,” its tag says “Korea.”

Yeah, I’ve traveled to several Asian countries and spent a few months in South Korea specifically and it’s odd to me to lump in all the different countries and cultures under a single label of “Asian” when trying to make a point like this.

Also, obviously every country has lots of people that are good, bad, polite, rude, etc, and people are people everywhere. But I don’t think that South Korea specifically really shares the “overly polite” stereotype that so many people used to (or still do) have about places like Japan. I had a mostly positive experience but certainly saw plenty of rude behaviors during my stay there as well.

Their legislature certainly has earned a reputation for less-than-polite behavior: 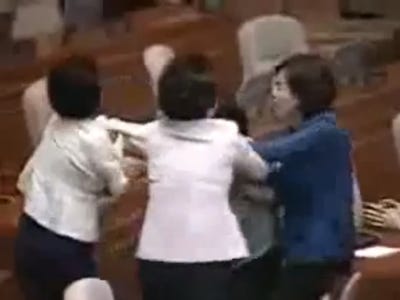 South Korea Has Found An Interesting Way To Deal With The Brawls That Keep...

(And for the record, the steps described in this article did not succeed in ending these brawls)

“We live right here or we trade right here and we don’t want this junction covered in debris (esp glass) for any extended period as it will affect us negatively. A few minutes pitching in to sort this rather than wait for some remote ‘authorities’ to sort it, seems the obvious thing to do.”

The more likely western internal narrative might be “what’s in it for me” and an inability to recognise the direct and indirect benefits of community-minded pitching in. Is that cultural? Maybe, if 40 years or more of neo-liberal, self-serving, individualistic, Randian bullshit is what has directed our culture to this mindset.

but rather that Americans are inherently disaffected from the idea of community. However, I spent the last decade in New York City, so my perspective on Americans and etiquette might be a little skewed.

Visit the midwest. At least the small to medium sized towns would have helped you clean up your spill.

One of the most entrenched stereotypes about Asian people is that they’re overly polite and docile. On the surface, it may seem like a harmless association, but the implication is that Asian people are pushovers. While there is a focus on manners and social etiquette in Asian cultures, it’s naive for anyone to believe that an entire race of people is inherently submissive and passive

Your heart may be in the right place but having a platform to put out ideas requires some editorial with regard to assuming a singular perspective, your idea of stereotyping actually represents a real feeling in the world.

You are making an assumption that there actually is an assumption… kinda counterintuitively re-enforcing a stereotype.

“your heart may be in the right place” is a patronizing stance similar to your rhetorical position.

“Docile” and “Pushovers” would be the furthest from my hive understanding of what “Asian” means given any connection to the local Vietnamese communities around my neck of the woods… A culture that still has to face a battle through a colonialist lens.

Do you read your stuff back or just hit Reply?

Your heart may be in the right place

I find it very interesting that you seem to have singled out our young Mr. Nealy for all your recent “constructive criticism,” when he’s not doing anything much different than the rest of the authors here.

I wonder what the distinction could possibly be?

However, I spent the last decade in New York City, so my perspective on Americans and etiquette might be a little skewed. 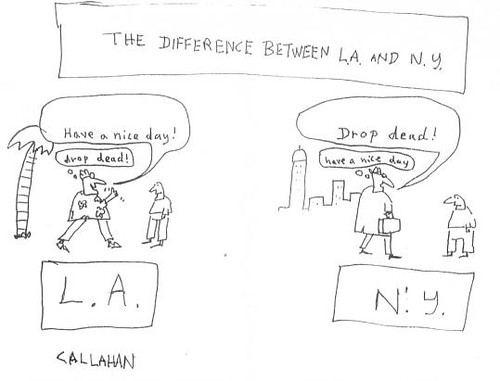 New Yorkers may seem brusk, but if you have a problem, they’ll stop and help. Really!

Yeah I get the brusk thing when living in Manhattan because part of the everyday is dealing with tourists walking too slow which is why I moved to over the bridge… in a strange way it was more of an accepting community for me.

Williamsburg has a great diversity in Asian food markets which are amazing!

Asian people aren’t overly polite, but rather that Americans are inherently disaffected from the idea of community.

Absolutely, I’ve had many conversations with people on both sides of this specific fence and conversations almost always end up on the breakdown of the American family unit into the Nuclear Family concept vs traditionally Asian family units had a high likelihood of including extra relatives like grandparent(s) that helped raise the next generation, and in doing so knowledge transferred from elders who wouldn’t take no shit from a grandkid, not too unlike Bran listening to Old Nan in GoT:

Edit: Watching that scene again, I just realized that Ser Duncan the Tall was Dunk and Egg fame who was also Breanne of Tarth’s grandpa, great grandpa?

But I don’t think that South Korea specifically really shares the “overly polite” stereotype that so many people used to (or still do) have about places like Japan.

Speaking only for myself here: You’re right, South Korea has a reputation as both being rude/impolite with our propensity for gangster culture that is intertwined with the Yakuza in Japan. But then there’s the odd eccentricities of Korean culture that have hardwired me to feel an urge like to bow in deference to elders which somehow has gotten cross-wired with beards for some reason, so this recent beard revival has been an interesting time to be alive. And this is where cultures collide when I meet older Chinese people whose culture long ago abandoned bowing, for me that urge kicks in and I can’t help but to bow when greeting and saying goodbye, which many have said they were surprised at how polite I was that I even bowed to them.

I prefer the corporate-tized salutations.

In Japan, we have turned the day-to-day bow into a quick, almost curt little nod. The neck and shoulder move just enough to separate it from a nod in agreement. It is barely even noticeable, but you find yourself doing it unconsciously when exiting an elevator before somebody else does or when the person at the register in a convenience store thanks you for your purchase (which does not merit a verbal response). I even do it when talking on the phone. We have a word for it: 会釈 (eshaku).

I really like how Koreans turn their head to the side when drinking with somebody who is older or higher status. I always make an effort to do that when I visit Korea, and my friends there find it hilarious.

I can somewhat relate to the sentiment because I spent my childhood in the Midwest where 3 in 100 have Asian heritage. But otherwise this post is really provoking disbelief. Live in Los Angeles for a year and you will be laughing at your old self and have a sense of where your stereotypes originated. Half the world’s population??? America devoid of community???

I even do it when talking on the phone. We have a word for it: 会釈 (eshaku).

Exactly, that bow is something I’ve done so many times it’s coded in machine language down at the root kernel of my OS. As a kid, I did it obligingly, but as time went by I did it more out of a sense that it is the right thing to do, like a moth drawn to a flame it’s instinctual at this point. ^___^

I heard a joke not too unlike what we’re talking about:

Pavlov’s is about to eat his food at a restaurant when someone opens the door, ringing the bell connected to it. Pavlov hears the bell and suddenly panics and yells: “Blyadʹ, I forgot to feed the dogs!!!”