a lot of paperwork and mahogany

/Puts on coat and detective hat

(2) Engineers’ Syndrome. Chess guys assume they know everything in the same way that engineers and dentists do

I suspect this case.

I can’t speak to the quality of the legal case (IANAL) but it sure seems from a lay perspective that he should have a case. His chess career has been ruined and, lest anyone forget, there has been no evidence of cheating. This is all, as far as actual facts can say, still just a guy who got lucky and a butthurt champion who can’t believe he lost to this kid.

I think the facts got buried immediately in this case because of all the ridiculous “theories” that the press relished in reporting on about how he cheated with sex toys. All which came from Pedo Guy and *chans immediately after the initial accusation, and again, are based on nothing.

Wait, I thought it was Neimann that was wearing the vibe?

Engineers’ Syndrome. Chess guys assume they know everything in the same way that engineers and dentists do

As an engineer, I feel very called-out here. Just because I know everything doesn’t mean I have some kind of “syndrome.”

I thought from the report that Chess.com had they absolutely had him switching tabs while in the middle of games, and that after he switched tabs he almost uniformly made moves based on what some of the top chess engines make. That they have this behavior happening in enough games and situations that they were able to gather and analyze games where the switching behavior happened and games where it did not and saw two markedly different skill levels of players. Couple this with the fact that Niemann has admitted to cheating in the past, I thought this was kind of an open and shut case.

there has been no evidence of cheating

Maybe not in those games, but he has admitted to it in the past. 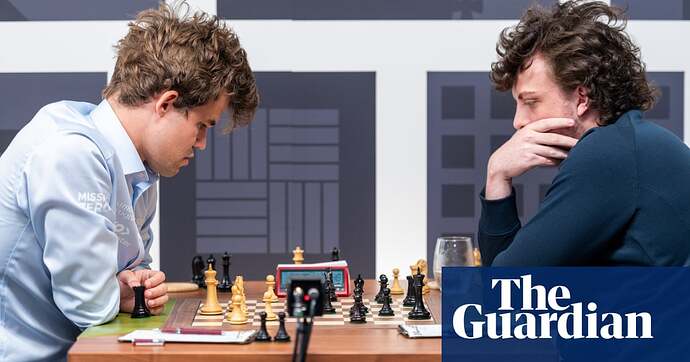 Hans Niemann, the 19-year-old who beat world champion Magnus Carlsen, has promised he is a reformed character after admitting cheating in the past

Maybe not in those games, but he has admitted to it in the past.

Yes, he cheated when he was younger, that’s no secret. That’s not evidence. You never did anything stupid when you were younger? Oh you did? Aren’t you glad nobody holds it over your head for the rest of your life?

So, my BFF is a chess coach and so she keeps up with the chess world. It should be noted that (as @VeronicaConnor said below) that there is no evidence outside of this one case that he admitted too. From the way she describes how they concluded he cheated seems super-sketchy. And also chess.com has entered into an agreement with Magnus Carlsen to buy his chess business… That’s not really something I’ve seen mentioned at all in this whole mess.

would indeed involve a lot of paperwork and mahogany.

May I reiterate that I just love Rob’s writing?

Chess.com is in more trouble because of its extensive published analysis/denunciation of Niemann, which Goldman writes “cannot possibly have been run through a lawyer familiar with defamation law.”

This doesn’t accurately reflect what Cohen said. He made this statement in response to Chess.com saying that it believed that Niemann cheated in more games than he admitted to, based on a review that they had done of his gameplay and shared with Niemann (but which in their statement they do not claim to have released publicly.) This is a terrible idea because it’s offering an opinion based on undisclosed facts.

Someone on Twitter informed him that Chess.com released their report concurrently with that statement, so he later revises his assessment to state that, since it’s an opinion based on disclosed facts, which can’t be defamatory.

The extensive published analysis/denunciation is exactly the thing that gets them out of trouble here.

It should be noted that (as @VeronicaConnor said below) that there is no evidence outside of this one case that he admitted too. From the way she describes how they concluded he cheated seems super-sketchy.

Well, first off, he admitted to several cases, not just one. And there is evidence. You can read the report, which details exactly why they think he cheated (which basically comes down to “he repeatedly played much better than any human does for a sustained period of time without cheating”.) And you can’t really argue that it’s not compelling evidence, since Niemann admitted to cheating when confronted about it; that is, unless he wants to allege that the slack screenshots are fake. The only thing that’s really in dispute is whether or not he cheated in streamed games/money games/games after the age of 16, which Chess.com alleges and Niemann refutes. Since Chess.com alleges those additional incidents on the basis of the same method they used on the events Niemann has agreed to, I tend to believe them over him, but it’s certainly possible that they’re wrong.

It is true that there’s no strong evidence of him cheating in live games, and the part of the report that Chess.com wrote about his live game performance certainly seems weak to me as a non-expert. But where it’s not in dispute that he cheated in at least some online games, I’m inclined to believe Chess.com when they say he cheated in a lot more online games than he admitted to.

Edit: I just caught that I misremembered the Chess.com report on his live play; I thought they said they were suspicious of it, but they actually conclude that there isn’t sufficient evidence that he cheated in live play. They’re suspicious of the Carlsen game specifically, but explicitly say that you can’t conclude anything from that one incident.

Again, he admitted he cheated in those cases (was unaware it was more than once), but not in all the cases they pointed out. But I would STILL argue it’s entire suspect that they have a business relationship with Carlsen which throws their status as a neutral party into question. I trust my friend if she says that they have a sketchy system for seeking out cheating in online games, too. She’s been a chess coach for years now, knows the online community pretty well, and has worked in the state leadership of the chess community for a few years.

And until they have actual evidence of him cheating, and as long as they have a connection with Carlsen, I’m not sure I’d trust them…

Totally fair; the business agreement with Carlsen is a good reason to be suspicious of their motives. I’d love to know what your friend finds sketchy about their system. But ultimately, the argument is down to who do you believe more, the person who admitted to cheating but says they only cheated a little, or the person in business with the guy who accused the cheater of cheating who says he cheated a lot more than he admitted? Neither side has perfectly clean hands here.

I’d love to know what your friend finds sketchy about their system.

She didn’t go into details, but I trust her judgement on this topic generally speaking. She knows the chess community pretty well, and some of the stories of the institution that runs chess in our state seems riddled with all sorts of problems top to bottom. I’d imagine that is magnified at the national and international level.

Neither side has perfectly clean hands here.

That’s very true. She agreed that Niemann is himself problematic, but she reasoned that until Carlsen and chess.com can come with actual proof instead of accusations based on past actions, it’s pretty suspect set of claims. Of course, if this lawsuit goes ahead, they will very much have to have hard proof that he cheated in these games specifically. It can just rest on his past behavior and the fact that Carlsen is the world champ so could not possibly lose to an up and comer.

Of course, if this lawsuit goes ahead, they will very much have to have hard proof that he cheated in these games specifically.

Well, not really. Niemann probably has to meet the actual malice standard, which means that the parties involved have to know that what they were saying is false. He’d have to argue that he’s not a public figure for the purpose of this lawsuit, which is going to be a pretty big uphill battle. Carlsen is probably safe if Niemann is a public figure; even if Niemann didn’t cheat, if Carlsen legitimately believed he did and didn’t have evidence otherwise, that’s enough. Chess.com explicitly doesn’t allege that Niemann cheated in this game, and their disputed statements about Niemann’s past behavior are likewise opinions based on facts that are now in record; even if you think their system is sketchy or bad, they said “Our system leads us to believe that he cheated in these games”, and as long as they didn’t make up the numbers whole cloth, they’re fine.

Unless Niemann manages to successfully argue that he’s not a limited purpose public figure, he’s going to need to find evidence that Carlsen and/or Chess.com made public statements that they knew to be false, and I strongly doubt that’s going to happen.

Edit: Should add that this lawsuit paints Niemann as a public figure, so it’d be pretty hard for him to pivot to argue otherwise.

You made a statement claiming there was no evidence of cheating. I pointed out that he had confessed to cheating before. That’s in the context of his lawsuit against, among others, chess.com. No doubt their defense will be “he’s a known cheater, by his own confession.” That, and the computer analysis they ran. I don’t know if he cheated or not. Don’t really care. I was engaging in a discussion of wether or not chess.com is in deep trouble from the lawsuit. I likely wasn’t clear enough when I wrote the post to which you responded.