The stats about the CPD are just so depressing, and now this:

Tips to Stay Safe In any Neighborhood (safe from the police, apparently)

The rate of CPD shootings of unarmed citizens is particularly bad in my section of town. Supposedly City Hall was starting to take the problem seriously, but with a “helpful” list like this, you’ve gotta wonder.

Two. Addendum…but you can’t tell which ones they are, so act like they are (see all other items).

Edit: I hate the way discourse tries to autonumber stuff, it’s as crap as Word at it. I wrote 2, not 1.

they act like they’re the victims! you have guns and a job you cannot be fired from. you’re holding all the cards. 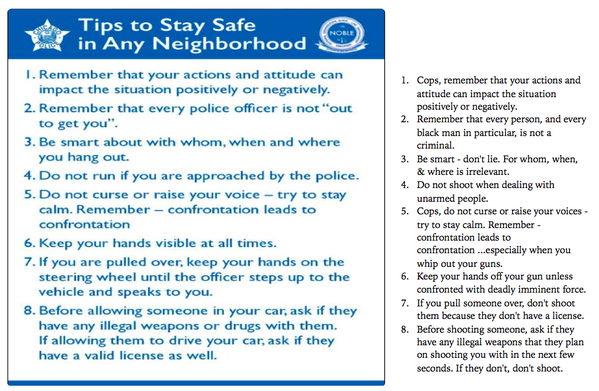 ya, the whole thread under there is pretty righteous

In a landmark agreement between the Chicago Police Department (CPD), the City of Chicago, and the American Civil Liberties Union of Illinois (ACLU), there will be an independent evaluation of the practices and procedures, and increased transparency and public disclosure regarding Chicago police investigatory stops. These stops (which may be accompanied by pat downs or searches) have been the focus of public discussion since March of 2015, when the ACLU issued a report raising concerns about the legality and constitutionality of the practice on Chicago streets.

Historically, it was heavily Irish, so maybe this photo is wishful thinking about getting back to that golden age? At least now the CPD is reasonably diverse. Well, at the lower levels at least; administrators aren’t on the streets, so they’re less visible. If I had to guess…

The unprecedented level of deadly gun violence in Chicago–both citizens and the police is sad an extremely disturbing.

This topic was automatically closed after 554 days. New replies are no longer allowed.