It only took one Dem woman to do what 16 Republicans couldn’t.

Secretary Clinton put him away with grace and dignity.

It ain’t over 'till it’s over!

I won’t sleep well until the riots are suppressed on November 9.

As my younger brother would say, “Duuuude, she totally pwned that guy!” I’m sure her tactics will fill Communications Strategy books for a long time to come, even though trump was clearly and overwhelmingly outmatched from the outset. Which made the debates all the more worthwhile. 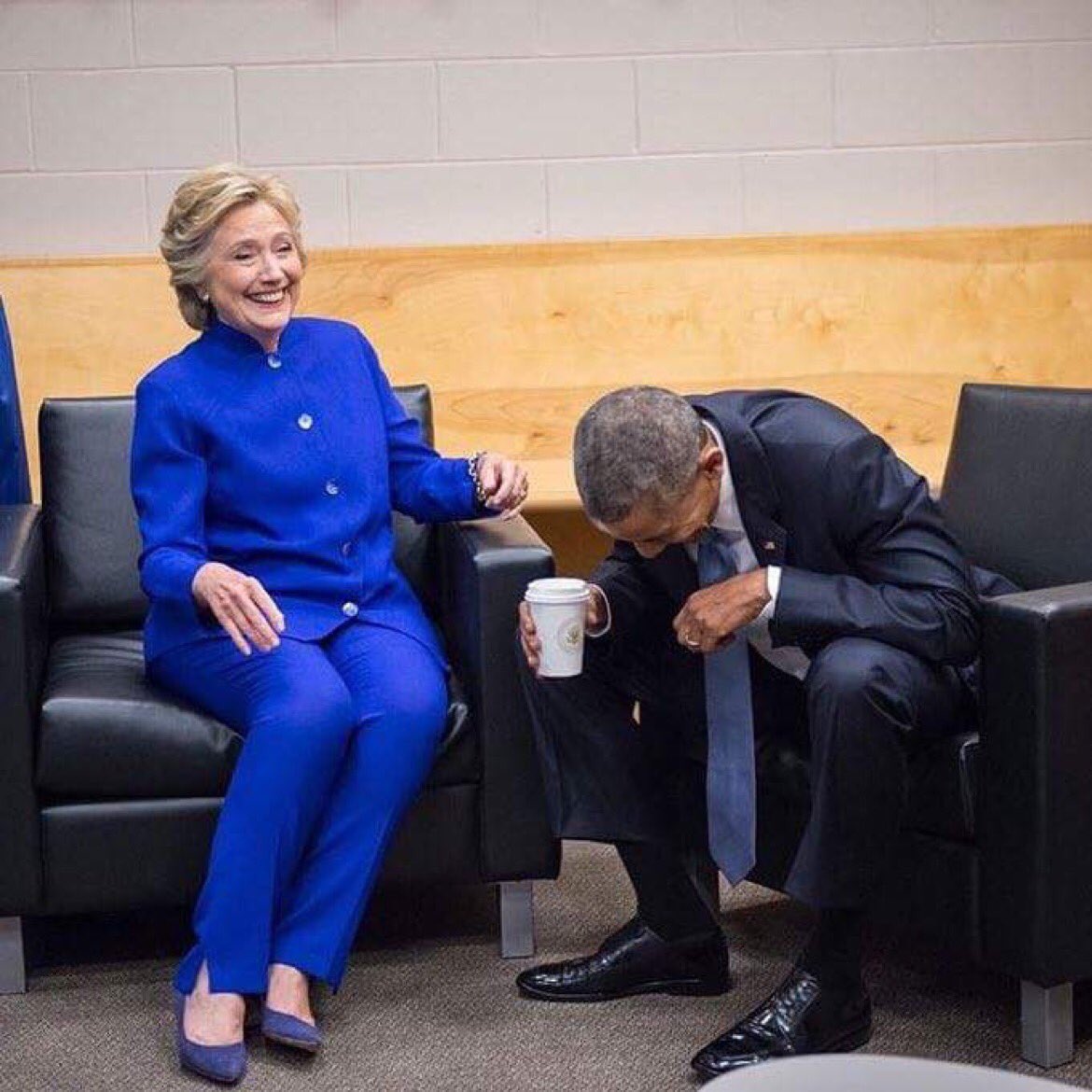 But the Winner Winner Chicken Dinner goes to:

the official GIF of the trump campaign https://t.co/YS5geQuG2p

And if you’re looking for the raw feed of that video to share with your friends, or to place into a frame just so you can watch the Orange Blowhard Post-Comeuppance in the quiet of your own home:

HAAAA HAAAAA ya whiny jackass, not once, not twice, but three times and with plenty of warning, You Got Your Ass Handed To You By Hillary Clinton. You probably know this, but I’d recommend you not test the other Clintons. You’re just not in their league.

I think it is easier to goad Trump than it is to trip a blind man.

I agree, that was a master class. I am happy it went that way since it illuminated something that was already known: Trump is not fit to be president.

Generally though, I find it disturbing that our opinions are formed by how politicians debate, not what they believe, or how they will govern. Likewise that we focus on who is winning as opposed to what they will do. Treating politics like sports leads to people invested in a team instead of a vision for the country.

Clinton, meanwhile, crisply summarizes the binders full of policy information she absorbed before the debate. The gap in preparation, knowledge, and basic competence has been evident in every contest…

Particularly so in the Middle East questions last night. One could tell at the beginning that he was really making every effort this time to appear less combative and more presidential. It was his last chance to lay out a policy vision. Instead, after Secretary Clinton (I want her to be very happy) did just that, he again replaced any positive vision with the one year old rant of who created ISIS, the Iran deal being bad for America, and the 30 years she’s had to fix a region that has proven unfixable for millenia.

In general, he didn’t get past his old self. In previous debates, she’d smile and spring the trap by repeating to the audience what he’d just said. This time, she just let him jump head first into it, smiled and walked away.

If anyone’s a really good video editor you could show this with HRC’s face on Blake Lively and Donald’s on the shark in their final confrontation in “The Shallows.” Just sayin.

And yet, he still out-bullies the entire Republican Party.

Why downplay her serious accomplishments here?

With a huge amount of help from Trump’s behavior, past and present, outside the debate hall.

No, no! We have all been deftly manipulated by the Clinton campaign! It’s true 'cause Scott Adams says so, and he’s a trained persuader! Clinton divulged classified information about America’s nuclear response time! E-mails! Benghazi! Etc.

[I still need to label this as satire, don’t I?]

Listen, I can really do without another Clinton (or Bush ever) in the White House and supported Bernie in the primary but I know HRC is a very skilled politician. I felt that she deserved a better opponent but the way she pulled his strings was amazing and seemed effortless on her part.

I guess we know who the real puppet is.

She helped him along though. The Alicia Machado thing was incredibly well done - she just dropped it into the debate, and all Trump had to do was ignore it, or downplay it - say it was a long time ago, whatever.

But all she had to do was bring it up, and Trump proceeded to self-inflict the most spectacular political wounds. He just could not stop himself from going on air and letting people know just how much of an asshole he is. That was the “one weird trick” of these debates - giving Trump opportunities to publicly and prominently double down on his own worst behavior.

tRump has nothing left but incendiary, vitriolic ranting. The same shit he started with.

And the landslide vote will not be voter fraud. It will be voter VOICE, and that folks is Democracy.

I do not like Secretary Clinton. I do not trust her. I also think, unfortunately, she will get the Obama treatment from Congress in addition to Trump tryingthe armed revolution rout.

However i have to bow in respect to her knowing her best course of action with the oompa loompa was to let him run himself into the ground head first with an acme rocket up his ass.

The T/GOP butt hurt will be felt for something like 8 years hence. Commencing with the next T/GOP meme, “Clinton Did It”.

There’s a great bit in one of the SNL debates.

Trump says something stupid, and the moderator gives Hillary two minutes to respond… And Hillary gives the two minutes right back to Trump, trusting that he’ll just use them to dig himself a deeper hole.

It’s simply amazing how true-to-life that is.

It only took one Dem woman to do what 16 Republicans couldn’t.

I think the fact that she was a woman was very key in her ability to do that - she was able to successfully expose his abhorrent misogyny.

The US is still unhealthily patriarchal, but at least now the Reps know that open “indecency” toward women can’t win them elections.

My bet is 2020 they’ll stick with a Nice Christian Boy and HRC will have a different battle on her hands. Pence/Rubio 2020 or whatever might be a harder fight.

But then, anyone they put up in 2020 is probably going to be a major canker on humanity’s gums in some way. It’ll be good if she can expose that, too!