Well, one of my home countries has been utterly fucked by a vote in 2016. Might as well make it 2 for 2.

I think she handled it pretty well. I agree that she should have stood by the remark, but she’s not backing down on the bigotry in Trump’s campaign.

Apologies simply make the current electorate despise a candidate more.
This also makes me rather sad.

So if you are among the 50% that do not vote, or among the 60% of voters not supporting Trump, or among the other half of the Trump supporter (90% of the voting age population), then you should be agreeing with the statement.

I regret saying half. I meant all.

She may have fumbled, but I have to say that was an excellent recovery.

So I guess that’s what you get for telling it like it is?

The unfortunate part is it gives them a name to embrace.

I may be racist, xenophobic, misogynist & easily seduced by a Reality TV star with no legislative agenda but NOBODY calls me deplorable. 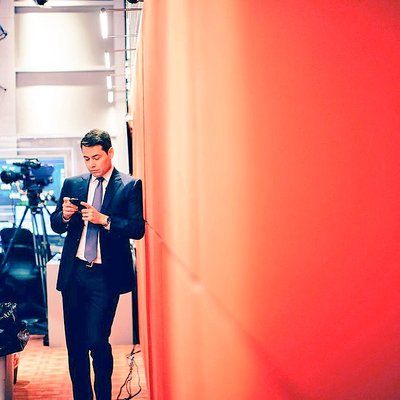 Luckily for Trump he's never made a sweeping, derogatory statement about a whole group of people.

And finally (OT) this one, because cats’ “slow reach” has always made me laugh.

I’m sorry for using a really long word that you might not understand.

What a stupid move.

Getting dragged into trading insults with Trump was a bad idea. Insulting people that you’re trying to win over (because everyone who has ever supported Trump will see themselves as part of that segment, even if they’re not who H is referring to), was also a bad idea. Walking back from the comment and making yourself look weak and annoying your base was a super bad idea. Doing all this one election after Romney’s 47% comment is just…

One of these candidates is a dead cockroach in the corner of the room. The other is rabid wild boar filling ice cube trays with its diseased ridden diarrhea. So yeah, we have two unappetizing options! Gotta go with the lesser of two evils!

Ummmm, the cockroach is the best choice, right?

Granted, Hillary used a pretty broad brush for the deplorables. That said, Trump supporters gave her the paint.

Jeebus in a sidecar. After watching that “Trump Train” video I think we’re gonna need a bigger basket.

since when does regret mean apologize except when someone writing a story interprets what hillary according to their bias? i think you could just as well argue that she regrets not calling all donald j.'s supporters deplorable. hillary did a double burn by choosing the word “regret” carefully instead of the word “apologize”.
oh, excuse me, i said half when i meant all i think is more like it if you pick up the code like i do.

It’s been my experience that the most easily offended people aren’t the ones who typically get labeled “politically correct”, but rather those that typically complain about PC folks being easily offended.

In other words, the more you complain about others being offended, the more likely you are to be offended and react outrageously about it all. 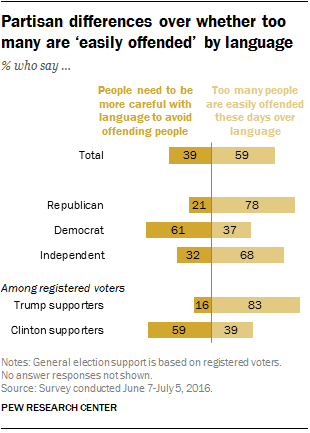 In ‘political correctness’ debate, most Americans think too many people are...

Six-in-ten (59%) Americans say “too many people are easily offended these days over the language that others use.” Fewer (39%) think “people need to be more careful about the language they use to avoid offending people with different backgrounds.”

Really, Trump supporters need to get over themselves and stop being hypocrites.

Every day another reason why the Dems should have ran Sanders and example why Clinton was/is such a poor candidate. Sigh.