I knew Clinton’s plan to partner with a Nigerian prince to combat our debt problems sounded too good to be true!

Note. I’m not really a big Clinton supporter. What is going on just reeks of a witch hunt. There is plenty of innuendo, but there is nothing solid. Nothing like the missing 5 million emails from Bush (II)'s term. Yes, I understand that those emails were finally retrieved (and the number was actually 22 million), and I’ve read people say that the emails were not missing, although, yes, they were missing for over two years, and when it takes the IT staff of the successor President (of the opposing party) to actually recover them, that doesn’t give me a warm fuzzy feeling on the technical merits of Bush’s technical team.

It seems that most of the candidates have issues with email, for one reason or another. Trying to stir the pot is pretty pointless at this point. Yeah, we’re finding out that our laws are inadequate for our current technology. Haven’t we known that for quite some time now??

I just love the fact that the email security and requirements for my non-classified job are far more stringent that what the Secretary of State is held to. Doing a fraction of what she did would be grounds for termination in my office.

I know we’ll never toss a top politician in jail, but can we at least fine them so that it hurts?

At last the other shoe drops. Hackers caused Benghazi! Probably North Korean hackers! And have we forgotten Whitewater? And Vince Foster?

According to Clinton, no email was used for classified material. It never is, it’s always hard copy. And that seems to be something not in dispute.

Then what were all those state department emails that Chelsea Manning leaked?

I liked your post in that the door is wide open for a veritable laundry list of anti-Clinton people to make much political hay of her email decisions. However, I don’t think she should get away with a slap on the wrist, even though I don’t know how the thing should be investigated/executed.

Just a quick correction - MXLogic is owned by McAfee, not Intel.

Well of course it’s a witch hunt. And it raises all sorts of questions like

This makes total sense. After her private email address became widely known because of this “scandal” she would have to start using a spam filter - I’m sure that account (and domain) got hammered.
I doubt she was using this spam service while she was SOS.

LOL it’s amazing the depths people will go to make excuses. No she did not just turn on this spam filter because her address which has always been public, just went public.

Intel has owned McAfee for over a year, and for one reason or another (Crazy John?) has been slowly re-branding its McAfee properties

There was an entire article in the New York Times about people disputing that point. 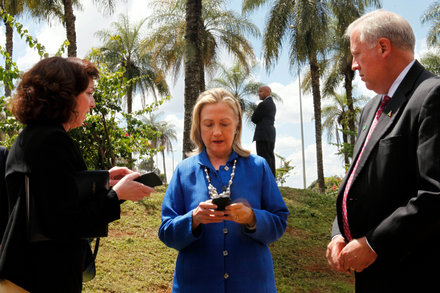 Former government officials and others said it seemed unlikely that none of Hillary Rodham Clinton’s emails while secretary of state contained classified information.

You can check the history of the DNS records here -
https://dnshistory.org/dns-records/clintonemail.com
It shows that she has only used MXLogic since last November. Before that the MX record for clintonemail.com pointed to mail.clintonemail.com, which pointed to the static IP address from Optimum Internet (the one registered to their house – 24.187.234.187 ).

Not making excuses, in fact, as an IT professional I am appalled by this. Setting up and maintaining a secure, internet-facing server is very difficult and if it is a mail server, almost doubly so.
Add in that this server will be a target of foreign (and domestic) intelligence services, finding someone qualified and up to the task of securing and maintaining said server becomes very, very difficult.
All that being said, evidence points to the fact that she did not find such an individual as the security on that server was abysmal.

If someone with Clinton’s budget and staff can’t secure her email, what hope do middle class citizens have as the future gets cloudy?