How did the judge resist calling it a limp trademark?

Thank God, I was afraid of getting sued when I bring out my upcoming biography, Cocky Rocker: Joe Cocker.

I understand that Cory is not an attorney, but it’s fairly common for PI/TRO motions to be denied. The law quite reasonably compels those seeking such a remedy to meet a very high standard.

As a trademark litigator, I agree with the court’s decision; however, I would also assume that the plaintiff’s counsel told her about the low likelihood of successfully obtaining a PI and/or TRO, and that they are prepared to go forward.

Does the winning side usually get court costs in a case like this?

Well, I hope the winners of the case don’t get cocky.

He may have been one of those hard up for a sense of humor types. But he probably wasn’t trying to be a prick about it. Judge Alvin has the same common sense that any regular Dick has, and could see that Faleena Hopkins’ argument was engorged past all reality.

Under the American rule, each party is responsible for paying its own attorney’s fees, unless specific authority granted by statute or contract allows the assessment of those fees against the other party.

The Lanham Act does provide for legal fees, but only for "exceptional cases. " Section 35(a) of the Lanham Act provides, in part, “The court in exceptional cases may award reasonable attorney fees to the prevailing party.” 15 U.S.C. § 1117(a). In practice, federal courts rarely find cases to be “exceptional.”

The good news is that this may be changing, due to the Supreme Court’s 2014 Octane Fitness decision which loosened the exceptional case standard. While that decision involved legal fees and costs in patent litigation, some circuits have applied it to Lanham Act claims. 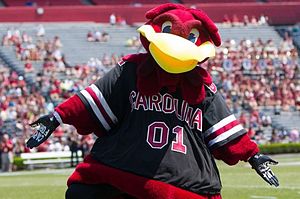 As opposed to Buffy the Vampire Slayer, of course.

One of those instances where it feels like the US system is wrong to have so much stuff decided in their courts rather than by their elected representatives.
IMO this should have been subject to a debate by elected representatives in the Senate/Congress or their underlings in the Department of something or other. This ruling, although sensible, was ultimately dependent on the views of one single individual… doesn’t sit right with me.

This is disinformation. The case has moved into Discovery. Kneupper was dropped, but the other two Defendants still have to move forward to discovery phase. While this does free up people to use Cocky, it does not mean the trademark has been canceled. This case is far from being finished.

Kneupper CAN move forward with is Petition to cancel, but the USPTO still has to cancel the Trademark, which can take up to 18 months! Please get the facts right before writing articles.

Just realised that it’s plausible that someone with the name “Jaxson” is a consenting adult. God I feel old.

This is incorrect. She lost a preliminary injunction and attempt at a TRO. However, the copyright still stands at the USPTO. The judge’s opinion that it’s weak may be an indication of how that will go, and certainly matches my opinion, but he’s not making the decision for the trademark.

Where is the Chuck Tingle novels on this & the Dragon Slayer trademarks?