Employers simply have no business policing what people do when they’re not on the clock.

11 Likes
Flight attendant sues Delta after it fires her for posting anti-Trump cartoon to Facebook
Hanglyman August 16, 2022, 5:45am #2

I generally agree, but I also think it’s a good thing when employers fire their employees after discovering their racist behavior off the clock, as we’ve seen numerous times when racist Karens harassing folks have a meltdown while being filmed. But of course context matters- there’s a big difference between a company being forced to deal with someone’s bad behavior going viral and a company creepily monitoring their employees’ social media for the slightest hint of political opinion.

I don’t have any confidence in corporations as the guardians of public morality. I think legal protection for workers against being punished for their out-of-work activity would do absolutely nothing to harm the cause of antiracism, because antiracism is not going to be advanced by pointing and laughing at the misery of anti-lottery winners.

However, I expect that normalizing companies firing people over some viral racist meltdown will keep the door open (because companies are amoral profit-seekers) for firing people when some crowd kicks up a fuss over someone being visibly queer, which seems way more likely to me now thanks to things like ‘Libs of Tiktok’ or the dishonest claims of ‘grooming’ people are starting to make.

I’d much rather normalize convicting racist harassers of disturbing the peace or similar and giving them community service, preferably in a way that makes them have to deal politely with people unlike themselves.

“Vocally racist asshole” is not a legally protected class, nor should it be.

‘Protected class’ isn’t really much reassurance when conservatives are actively trying to undermine LGBTQ rights. (Not to mention that proving discrimination is really hard.) It’s a useful concept to apply special scrutiny to cases involving historically marginalized groups, but worker protections should be as iron clad and universalist as possible.

So we fight for LGBTQ rights and fight against racism.

We are under no obligation to treat the two with equal respect or deference. “We can have both or neither” is a false dichotomy.

The point is, we can expect capital to go with whatever advances their bottom line, which includes cozying up to racists and homophobes when it’s convenient.

I see no advantage to adding a ‘unless they’re racist’ exception to a basic worker protection against trying to control people’s lives out of work.

Not just the rights and humanity of the LGBTQ+ community; they are coming for everyone who isn’t straight, White cisgender, able bodied, male and claiming to be Xtian.

Like Brainspore already pointed out, we those of us who have not given up fight oppression on all fronts, because: 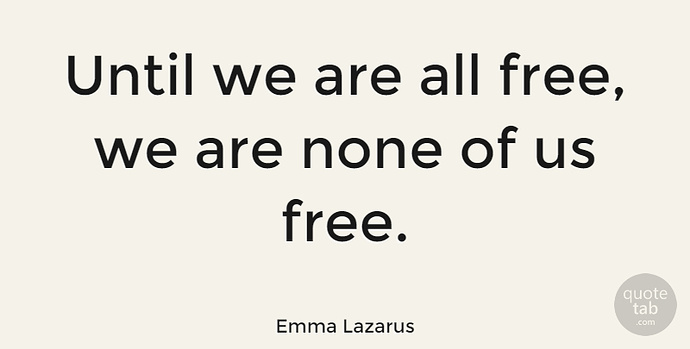 This makes the assumption that empowering capital to police people’s live outside of work is effective antiracism. I don’t think it is.

I see no advantage to adding a ‘unless they’re racist’ exception to a basic worker protection against trying to control people’s lives out of work.

If an employee is ever in a position of power over another person or group of people (and most are, in one way or another) then it is likely pretty damn relevant if they turn out to be a bigot.

For example, if a police officer or a teacher or a medical provider posts something racist on social media that’s a big red flag that they are likely making decisions at work that endanger the lives, freedoms or opportunities of the people who depend on them.

adding a ‘unless they’re racist’ exception to a basic worker protection against trying to control people’s lives out of work.

Yes, because racists famously leave their racism at the door of the jobsite… /s

I think it’s a pretty big assumption that that is what @Melizmatic is arguing for. And of course, a large swath of the working class is made up of POC and members of the LGBQT+ community. It’s not all white dudes working in factories. It’s a variety of people working in various settings. You can’t solve a 21st century problem with a 19th century mindset.

I didn’t say or imply anything that you just mentioned in your assumption.

As an imperiled WoC, I still ally myself with my LGBTQ+ brothers and sisters (and every other group under threat from the fascists) because I understand that we are a stronger force together in the face of a rigged system that often seems insurmountable.

I dont expect to see major victories in my lifetime, and yet I still fight anyway, and I encourage Others to do the same.

That stated, I don’t have any bandwidth for those who claim defeat preemptively, or who deride every small step of progress that does get made.

To what degree do you actually trust Jeff Bezos and Elon Musk to do anything good with the ability to fire people based on what they see on their social media?

It’s very rare that people’s racism is just confined to their social media. Especially now. It generally comes out IN the work place one way or another. Because people don’t compartmentalize their lives so easily.

To what degree do you actually trust Jeff Bezos and Elon Musk to do anything good with the ability to fire people based on what they see on their social media?

They should Absolutely hold their own employees to account, but we know in the case of Musk, that he does not.

because I understand that we are a stronger force together in the face of a rigged system that often seems insurmountable.

And this has been hard, getting white working class people to embrace as a concept. There are certainly times in US history where it’s happened, but the reality is that POC and the LGBQT+ community have more often than not shown up for white people who should be allies than the other way around. It’s been pretty easy for the Republicans to peel away white middle and working class voters with fear-based messaging that pits the white working class against other groups in the working class.

but the reality is that POC and the LGBQT+ community have more often than not shown up for white people who should be allies than the other way around.

I wish it were not the case, but the reality is that once labor started being more representative of the actual working class (when Black workers and women of all races started showing up in leadership positions, for example) is when it was easier to tear it apart. It’s not a surprise that both coincide with the 60s and 70s.

There are certainly things people should not be fired for - their tastes in music, their taste in culture, their general political views, etc… but when you start embracing far right politics, it absolutely puts the lives of your other employees on the line. We have not been taking these politics seriously in this country for far too long. It’s time that we did that.

If we’re going to go that route, it would be less harmful overall to have German style laws against outfits like the Klan than to give capital power over people’s private lives.

You seem rather intent on hopelessness; that’s highly unfortunate.