Cornered FCC admits that its website was never hacked

Wow, bad news for the FCC and Ajit Pai. This is not an administration that will tolerate lying. Heads are gonna roll for this, no doubt about it.

This administration doesn’t tolerate admitting that you lied. They are supposed to double down on the lie.

That’s true, but you can make contradictory statements and insist that both are true.

Looks like they jumped straight to step 3: “…and if I did, it was Obama’s fault!”

I am deeply disappointed that the FCC’s former [CIO], who was hired by the prior Administration and is no longer with the Commission,

Looks like they jumped straight to step 3: “…and if I did, it was Obama’s fault!”

That and the eternal cry of the conservative caught doing something scummy: “I’m the victim here!”

I call bullshit on this corporate shill !

Just tweeted Bray to ask what his take is on this - doubt he’ll respond, but you never know.

On the other hand, I’m pleased that this report debunks the conspiracy theory that my office or I had any knowledge that the information provided by the former CIO was inaccurate and was allowing that inaccurate information to be disseminated for political purposes.

I don’t think the report proves this at all. Standard Trumpian tactic, though.

Kettle logic (la logique du chaudron in the original French) is a rhetorical device wherein one uses multiple arguments to defend a point, but the arguments are inconsistent with each other. Jacques Derrida uses this expression in reference to the humorous "kettle-story", that Sigmund Freud relates in The Interpretation of Dreams (1900) and Jokes and Their Relation to the Unconscious (1905). The name "logique du chaudron" derives in Jacques Derrida from an example used by Sigmund Freud for the ...

In a sane world this would result in resignations and possible jail terms. Here on Earth 2? Barely a blip.

These guys never accept responsibility. It’s always someone els’e fault, Obama, HRC, but never the person or party that actually holds the reins of power. Fuck’em.

I think the white-hat version, which is actually very useful, would be defense-in-depth, where you construct an argument that leads to the same conclusion regardless of which of many conditional paths through suppositions you take.

I wonder what fraction of people can intuitively and efficiently tell which they are being presented with?

This is Ajit getting out in front of the report, putting his spin on it and blaming someone else to distract attention from the BS lie and the fact that he ignored public sentiment.

You were expecting something else?

Pai says he’s as much of a victim as anyone…

If only that were true. 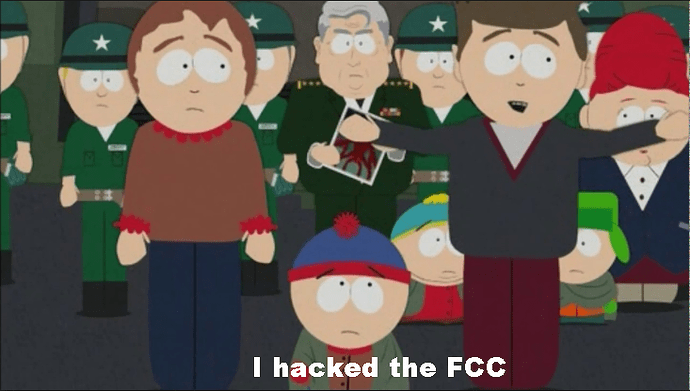