in some countries crossbows and crossbow pistols are restricted weapons, like a regular firearm.

be cautions. in our fair state, an ambitious law enforcement officer could cause you some court time for that weapon. 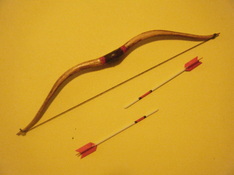 The mini crossbows featured here are approximately 3" by 3"  (slightly smaller than a Bic lighter) when assembled, and FULLY FUNCTIONAL. Very detailed and take great skill to build and assemble,...

They are so much fun. SO FUN!

Now maybe this is my own damn fault (it is) but I did something to my rotator cuff while spending the whole afternoon playing with one of these. I’m not that strong, but I pulled on it over and over, and it was just too much, I guess. At the time, I had no insurance, and it was while pre-existing conditions could still fuck you over, so I didn’t go to the doctor. This is the root of my problem, I suspect, not the crossbow pistol itself. I just don’t want anyone else to hurt unnecessarily.

So, have fun! It’s fantastically entertaining, but be careful in all the ways mentioned, plus if your shoulder hurts the next day, go to the doctor.

In Canada, from the RCMP:

Do the licensing and registration requirements apply to bows?
A5. Crossbows that can be aimed and fired with one
hand and crossbows with an overall length of 500 mm or less are
prohibited. You cannot lawfully possess or acquire a prohibited
crossbow.

I had one of these as a teen, and I can verify that they are dangerous in exactly the same ways as a firearm, and in some ways they’re worse.

I remember being surprised at the accuracy the thing would yield if I was patient. The aluminum-and-plastic bolts didn’t stand up to the rigors well though. They’d last maybe three or four firing cycles and the tips would break.

If the article is correct, 80lb is impressively powerful. My old compound bow is only 65lb .

I always wanted a cross bow too. It looked a lot easier to aim than a bow, which for some reason I could never aim that well.

How was this not the featured event at the Weekend of Wonder Taco Party?!!

How to Build a 3D Printed Arduino Controlled Banana Cannon; Just Look At It.

I guess the 2nd Amendment is why these are able to be bought in the US - not allowed here in Australia,

Don’t forget to write an article about the emergency room visit to have a quarrel removed from you or one of your kids. A pal of mine got one an put a quarrel in his thigh while cocking the crossbow the second day he had it. I took him to the emergency room and we spent all afternoon staring at this thing sticking out of his leg waiting to see a doctor. I think they make your wait longer at the E- room for stupid stuff. It could be worse he might have accidentally shot his dog.

We have an extra level of idiocy about weapons here in the US. Just look at all the open carry fools carrying their rifles around in public ( to make up for their small penises ). It’s only a matter of time before we have some really tragic accidental killings by scared people caring guns with little or no training and experience. Then you be thankfull that the Aussies were smart about weapons.

The thing I likeost about these small cross ows, is how they embody the danger of a firearm without the magical woo woo bullshit of gunpowder. Hold up a conventional firearm, and most people have a raft of associations gleaned from Hollywood and the news headlines and the crazy ideas passed around as fact from the gun lobby. But a crossbow just plain looks dangerous without carrying all that baggage. If I were more into the pew-pew, rail guns would be the next level of lethal fascination. The circuitry is pretty simple, for the level of non-electrocution danger it embodies.

Was your friend using some kind of home made bow or was he just really careless with his trigger safety?

One advantage of a full-sized crossbow is that a foot stirrup and other cocking aids can help avoid strain injury.

Just like with a firearm, a crossbow bolt should only be loaded when you are ready to fire, and the standard firearms safety rules must be followed.

He thought he knew what he was doing but didn’t. He had never really handled anything like a crossbow or even a gun before that. I tried to talk him out of it but to no avail. For the record I was brought up with guns and was taught to shoot a .22 starting when I was 5 by my Grandad who was a champion at “turkeyshoots” in his younger days. I don’t even own a gun these days as I don’t hunt and long ago decided I would never risk a gun in the house when my daughter was young.

According to an account in the Daily Mail, (I know, I know…), untouched crossbows sitting on desks can suddenly go off - even with the safety catch engaged.

(WARNING: Photos of a wide-awake 17-year-old kid with a crossbow bolt sticking out of his face) Lewis Tavernier had placed his crossbow on a desk at his friend's house in Stevenage, Hertfordshire, with the safety catch on when it suddenly fired.

I’m not posting this to be a concern troll, I was just browsing Google Images for crossbow stuff and I WTFed hard when I saw this kid’s photo. There were also photos of living dogs, cats, and pet ducks with arrows and crossbow bolts sticking through them but they were just horribly sad, so I quit looking.

At this point in my life I’d probably enjoy an indoor Nerf crossbow shooting gallery with (slowly) moving targets - nothing that could accidentally hurt the cat seriously though.

If the article is correct, 80lb is impressively powerful. My old compound bow is only 65lb .

It’s actually fairly weak, especially for a crossbow. Crossbows and regular bows don’t scale the same way. Crossbows have shorter draws and therefore do less work in the physics sense of W=Fd. If I recall correctly, a 300 lb. crossbow that utilizes a windlass for loading is roughly equivalent to an 80 lb. longbow. This is a dinky toy by comparison. Which is fine, that’s how it’s being used, and I’m not knocking it. [Insert “nocking it” pun here.]

ETA: My own 300lb. comment doesn’t seem right to me… maybe it was 200? It actually depends on the specific bows being compared anyway. It’s fairly easy to multiply feet by pounds and get the right number of foot-pounds for comparison. I don’t own either kind of bow, so I’m not sure what the typical draw length looks like.

I got one of these from my wife, last Xmas (same cobra brand-mark, on the side). I read online that the archery range in Golden Gate Park doesn’t allow crossbows, and I’d somehow gleaned that it had something to do with them somehow tearing up targets more than regular bows, so I called to ask if an exception might be made for this tiny example. I learned that all crossbows are banned throughout San Francisco. Apparently, even just having it is a violation, and shooting it in my tiny backyard, is inviting trouble.

I’ve been enjoying taking it on occasional weekend trips out of town. I got a cheap box of 50 bolts, and some kind of dense target bag that does a good job of stopping the bolt–they tend to shatter, if someone misses the bag and, say, hits the guesthouse neighbors’ fence.

Anyone know of a SF Bay area archery range that allows crossbows–or, at least, those of the puny pistol variety?

A bolt shot from this thing could kill someone

But what we all want to know is… could it take down a fully-grown male lion?