If your objective is only to remove the bicycle you can just cut parts of the bicycle to do so.

Tell me more about specific laws US lawmakers have passed specifically targeting automobile theft, and how the laws have made such theft rare.

You’ve heard of the crime (not the game) called Grand theft auto? Stealing cars is singled out from other kinds of theft and punished more severely, and has been since the early 20th century. Stealing bikes (petty theft) is essentially consequence-free in many jurisdictions.

I have indeed seen enough bike-less locks dangling from wheelchair ramp handrails that it seems likely that some building maintenance teams are doing that very thing.

Would it be better if the barf spray was replaced with the same type of dye they use in bank anti-theft packets, but a smaller radius? Why are your hands and shirt bright purple?

I think the combination is good. Make 'em puke their guts out and stain them in a nice dayglow colour so the cops can cruise around and pick them up.

I can see this being an effective deterrent in broad daylight with lots of people around, but what great lock isn’t already just that? With the cover of night, all you’d need for this lock is an angle grinder and a full-face respirator.

I have a heavy-duty long-shackle bike lock. There are some bolts in the frame of my bike which are positioned in such a way as they dig into the lock because of vibrations and bumps. It’s not a big deal, but it has torn through the rubber layer.

If I had this lock, would it randomly spray a chemical weapon on me and everyone around at some point?

I carried mine like a bandolier until I bought some rear panniers. The weight isn’t very noticeable, especially if the panniers have a low centre of gravity.

I can see this being an effective deterrent in broad daylight with lots of people around, but what great lock isn’t already just that? With the cover of night, all you’d need for this lock is an angle grinder and a full-face respirator.

I guess if you know about the lock’s unique feature; most thieves might not be that prepared.

But even then I don’t see how throwing up prevents someone from stealing a bike.

Wow - so who is buying all the stolen bikes? Are they people who had their bikes stolen and need an new used bike? Do they sell it out of the area for used bikes?

Where do you think most of the bikes on Craigslist or at flea markets come from? (Not even being sarcastic)

For over a hundred bucks, why not just a bike lock that’s really fucking difficult to cut? Seems doable for that price, surely?

People in SF have literally watched people drag around portable angle grinders and cut the locks off of bikes with most folks just walking by.

tearing hair out with both fists

Uhm, that’s like the Mission. Calling the police? Yeah, if they bother to show up, it will be in 30 or 60 minutes (maybe), even though the police station is four blocks away. They don’t care about bike theft.

You missed the fact that the other dude hanging out is his spotter to distract people too.

At least in the Bay Area, it is pretty much a given that if you chain your bike up someplace (no matter what you use) and leave it for more than 30 minutes, it will vanish.

I’d still have my smartphone out, grabbing video, spotter or no.

When I lived in Austin, the bike/pedicab/messenger community would have a pic of this guy in action on the internet by the end of the day. They may not have been able to have him arrested, but the bike scene would know who he was. A chance of nabbing him later during a Craigslist sting would at least improve the odds.

Incidentally, I caught a guy on my own stolen bike once in Gainesville, Florida (home of the University of Florida - and home to LOTS of bikes and bike thievery).

If you ask me, most thieves don’t get away with it because they’re criminal masterminds, but because the community is too unconcerned to get involved. 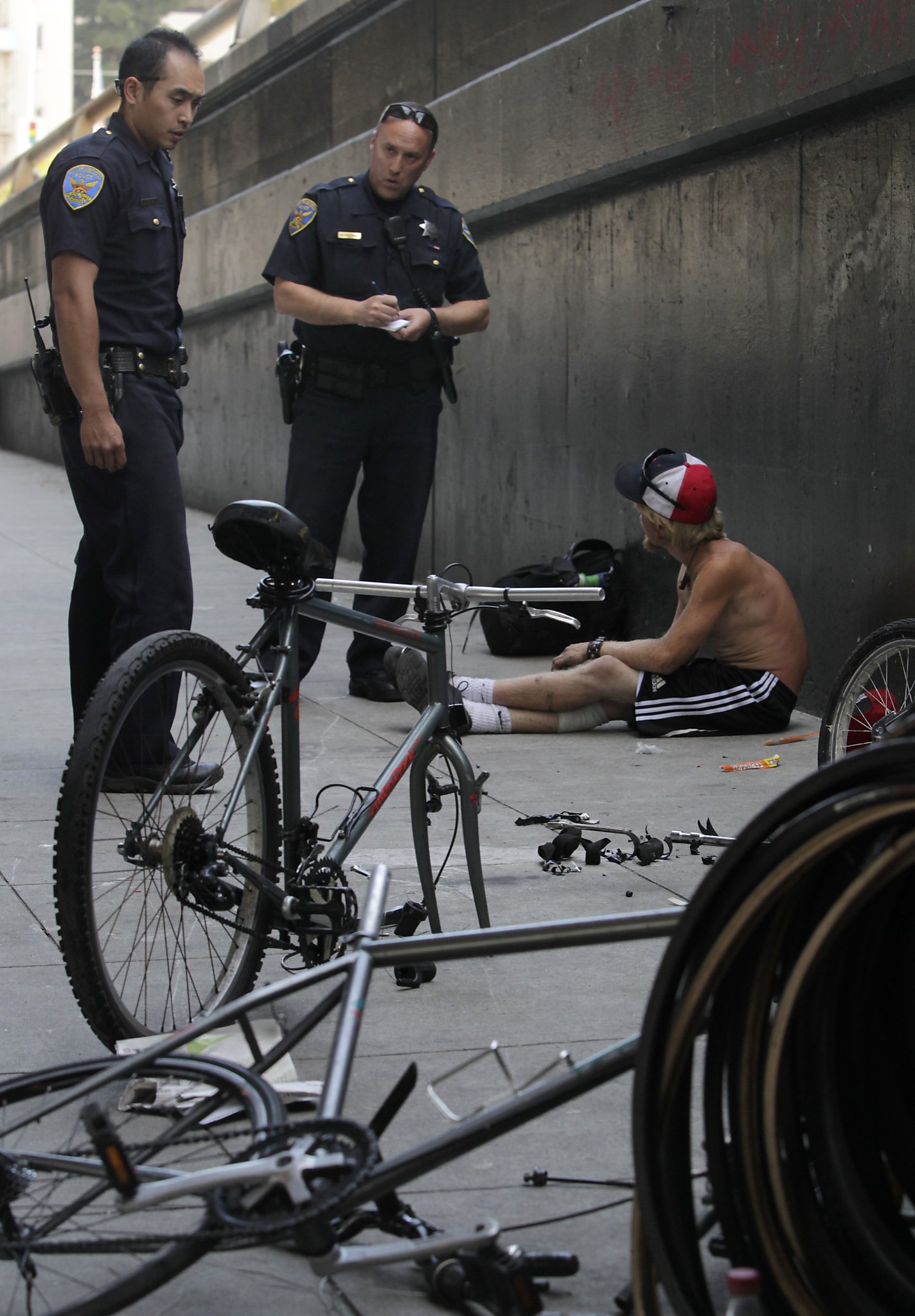 Here's how to get your stolen bike back in S.F.

Bike theft is a growing problem in the city, but, finally, people - and the police - are taking matters into their own hands by targeting thieves and finding ways to get those bikes back. A report prepared for the Board of Supervisors last year... The I-Team went undercover to one of San Francisco's most notorious chop shops to investigate what is happening with the city's stolen bikes.

Reminds me when I was walking by a local walmart, and I noticed that some gentlemen were busy passing packages through a gap in the fence around the “outdoor” gardening department. I actually had a supertelephoto lens on my camera at the time, but I didn’t want to look conspicuous.

This isn’t legal in the USA or Canada that is for certain.

Pepper spray, mace, tasers, are already in a legal grey area exempted only because they are used in defense of threat of physical harm. Personal property such as bikes and cars don’t fall under the castle doctrine, like homes do. This means that anyone using this device can and likely will be charged with assault.

Also, any gas that has this level of effect likely is lethal to certain individuals, to people with certain conditions, a certain percentage of the time.

Even if this was legal and caught on, thieves would find a way around from gas masks to cutting whatever your bike is locked to, to wrapping the cutting tool and area in a damp cloth.

This seems like a pretty stupid idea to me.

Reminds me when I was walking by a local walmart

i was getting out of my car at our local Walmart and a man and a lady in long coats obviously stuffed full of large bulky items started emptying out their jackets into their car, i couldn’t believe how much stuff they fit and how obvious it was, and to my even greater surprise the guy turned to the girl and said “i’m going to go back in for another run”…

I’ll admit that I sat there for a few minutes before deciding what to do… They looked like they had rough lives, and i have no love for walmart, but after debating with myself i mentioned it to the guy working the customer service desk, and i swear to god he just shrugged and said “what do you expect me to do?” I’d be lying if I claimed i didn’t day dream about walking out with a bunch of free shit myself with that attitude, but then that part of my brain that keeps me from swerving into oncoming traffic kicked in and i continued on my day just smdh and muttering to myself. I guess that’s what you get when you don’t pay your employees enough to give a fuck.

I thought that was what happened (the thieving, the underpaying and the not caring) when you didnt have a cohesive society with proper social safety nets.

Desperate people robbing corporations that promote the conditions that create them get a pass from me, I’ll issue no tickets into the system. If they are limiting themselves to property crimes against the common enemy the only thing they deserve from us commoners is a wish that their lot improves.

I like it in spirit, but this is a terrible idea.