They have been doing this for years. I guess the internet is the difference. All sorts of non combatants, including reporters, used to ask to have their photo taken with a borrowed gun and sometimes helmet and vest. Of course, in the current conflict, western reporters get beheaded if captured, so he probably should learn how to work the safety on one of those (you push it down).

You think he is the only westerner volunteer with the kurds ?

You think he is the only westerner volunteer with the kurds ?

That’s not a good idea if you live in the UK. People have been arrested on terrorism charges for trying to join the PKK.

But he’s not volunteering… he’s reporting for a right wing rag. He’s there to drum up support for the war, not to fight with the Peshmerga. They are putting their lives on the line to fight Daesh, and he’s profiting off their struggle.

Aren’t the Peshmerga and the PKK different organizations… the west considers the PKK a “terrorist” group, because Turkey classifies them as such.

I don’t think the UK Border Force would distinguish. The government don’t want anyone from Britain fighting in Syria.

Sure, fair enough… I just don’t think that the Peshemerga would be considered a terrorist group, is all. I don’t know… does the UK consider them as such, cause I don’t think the US does.

Hm. So I wonder if a Brit would be charged for trying to join them…? I think the US had some cases of people here joining them…

I don’t know… it’s all so arbitrary in some ways. If it weren’t for the war in Iraq, the rise of Daesh, and the Syrian civil war, I doubt western governments would be inclined to differentiate in that way.

I wonder if a Brit would be charged for trying to join them…? 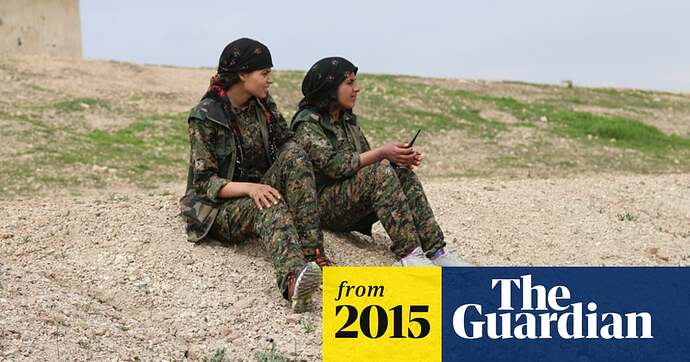 Shilan Ozcelik, 18, becomes first Briton to be arrested for trying to fight against Islamic State in Syria

Her supporters say she travelled to Brussels in an attempt to join the women’s protection units, also known as YPJ, that are based in Rojava – the Kurdish enclave in northern Syria under attack by Isis. She was arrested by on 16 January at as she returned from Brussels. Neither the YPJ nor the YPG, the main men’s Kurdish peshmerga militia in northern Syria, are banned organisations in the UK.

Thanks for illustrating my laziness!

Sounds like she was charged with trying to join the PKK, even if her supporters say she wasn’t.

Sure… you just actually went and looked (which I’m sure took you all of like 3 seconds) instead of sitting on your ass like me! Good on you! Bad on me!

The US is giving them arms and supporting them now. Not that that says anything about whether we’ll be calling them a “terrorist group” this time next year.

Welcome, Internet Badass! Please stay a while, that we may taunt you for our own amusement!

It takes a special kind of person to leave home and join a foreign militia to fight the theocratic brutes of the Islamic State's army. It takes an even more special person to realize, a little too late, that his chosen anti-ISIS militia holds a...

I’ve always found the internet love in from the US for Kurdish fighters to be… amusing given the communist leanings of Kurdish separatists.

Anyway, no matter how many admiring quotes I read from anonymous US diplomats or foreign policy experts about Kurds the truth of the matter is that this time, like every other time, the US will betray them and betray them hard. All they want is a military client state in Turkey (and everywhere else in the region) and there is literally nothing that a US military client state can do to its own citizens (torture, executions etc.) or to separatist movements that will draw US ire as long as they keep taking the weapons and don’t rock the boat on Israel.

So only people who have actually been out there doing the reporting are allowed to express an opinion? The community here is pretty large. You might find that some here actually have experience.

And I resent the implication that I’m sitting in a knockoff coffee chain. I happen to be standing.

What an egotistical wanker.

Are you a Kurdish Black Tiger?